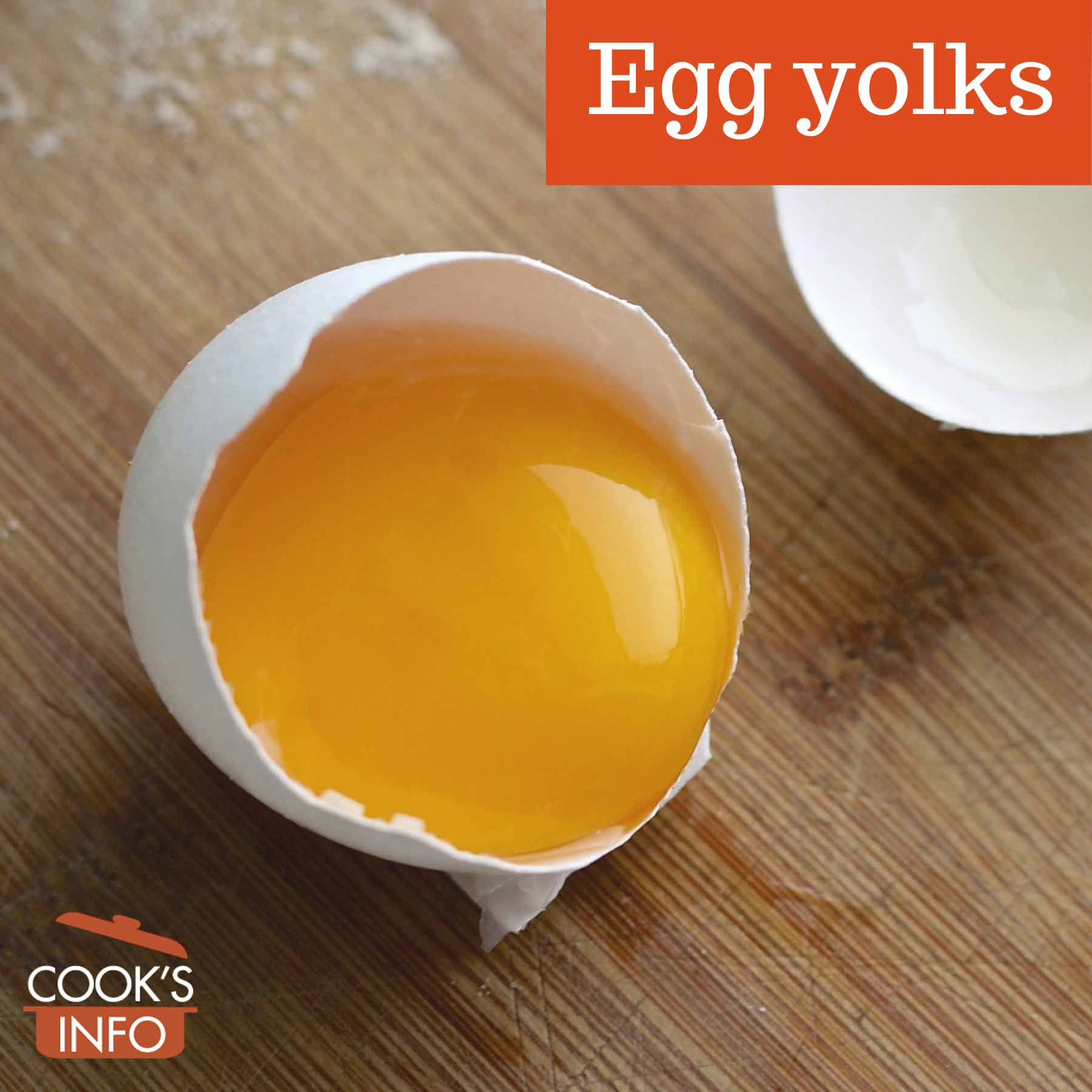 An egg yolk is the yellow centre of an egg.

In Western cooking, unless otherwise specified, the egg meant is a chicken egg.

In cooking, egg yolk is often used as an emulsifier, sometimes as part of the whole egg, but often especially on its own in dishes such as Caesar salad dressing, Hollandaise Sauce, Sabayon, etc.

The yolk of an egg is also where the eggy richness of taste resides.

When fully cooked, an egg yolk is solid.

The depth of the yellow colour of the yolk is irrelevant to the taste or nutritional qualities of that yolk:

“The colour of the yolk (deep or pale yellow) has no bearing on the quality of the egg, and any blood spots that may be found in the white or the yolk have no significance.”  [1]Lang, Jennifer Harvey, ed. Egg (oeuf.) In: Larousse Gastronomique. New York: Crown Publishers. English edition 1988. Page 405.

Instead, the hue of yellow simply reflects the feed available to the chicken that produced the egg:

“The color of egg yolk comes from pigments in the chickens’ feed; corn and alfalfa make the yolk a deeper yellow, and the addition of marigold petals makes the color brighter.” [2]Joachim, David, Andrew Schloss and A. Philip Handel. The Science of Good Food. Toronto, Canada: Robert Rose. 2008. Page 2005.

Current dietary debate about the nutritious of egg yolk centres mostly around its cholesterol levels, and varies as the science understanding cholesterol in our bodies continues to evolve.

Some diets recommend eating egg white, but omitting egg yolk, because all the fat of an egg is in its yolk.

“[The] egg yolk accounts for more than one-third of an egg’s weight, half its protein, three-quarters of its calories)(about 60 kcal), and all of its iron, thiamin, fat, cholesterol, and vitamins A, D, E, and K. Other than fatty fish or fish oils, egg yolk is the only natural food source for vitamin D…. Some of the fat in yolk is cholesterol (one large yolk contains 213 mg of cholesterol; the same weight of beef has about 50 mg) and some is lecithin, a phospholipid that gives egg yolk it ability to bind fat and water into an emulsion.” [3]The Science of Good Food. Page 2005.

“The yolk of the egg (30% of the total weight) is an opaque soft substance which congeals in heat. The yolk is composed of albumins, fats containing vitamins, lecithins, nucleins, chlorestins, and mineral substances including a ferruginous pigment called haematogen, which gives it its colour. It contains the germ (visible in a fertilized egg — this does not mean the egg is inedible), the remaining proteins, and all the fats (especially lecithin), together with iron, sulphur, and vitamins A, B, D and E.” [4]Larousse Gastronomique. Page 405.

Some recipes call for raw egg yolk, which does not get fully cooked during preparation of the final dish.

In recent years, there are health concerns over this owing to the possible presence of pathogens such as salmonella which are only killed when a certain degree of heat being attained. The problem with egg yolk is that it can be difficult to attain that heat level without going over it and rendering the egg yolk solid, which renders it useless in that given recipe.

One solution is to simply purchase shell eggs that are already commercially pasteurized, rendering them safe for raw consumption. These, however, are more expensive, and not commonly available in most grocery stores.

Here are two methods for pasteurizing raw egg yolk at home which still leave it in a liquid state required for such recipes.

“In a heavy saucepan, stir together the egg yolks and liquid from the recipe (at least 2 tablespoons liquid per yolk). Cook over very low heat, stirring constantly, until the yolk mixture coats a metal spoon with a thin film, bubbles at the edges or reaches 160° F (71 C). Immediately place the saucepan in ice water and stir until the yolk mixture is cool. Proceed with the recipe.” [5]Meyer, Lavonne. Egg Safety with Holiday Foods. South Dakota State University Cooperative Extension. 19 December 2018. Accessed August 2020 at https://extension.sdstate.edu/egg-safety-holiday-foods

This method was discussed in the book “The Curious Cook” by Harold McGee.

This is the equipment needed:

“Apart from the microwave oven, the cook needs just three or four tools to near-boil egg yolks for the emulsified sauces. One is a small glass bowl, with a capacity of 2 cups [500 ml] or so, that allows observation of the cooking and confines the yolks in a small, manageable area. The others are two or three small whisks. The yolks must be beaten several times during the cooking; and if the same whisk were to be used every time, it would recontaminate the cooked mixture with traces of the original uncooked yolks. True, you can wash the whisk after the initial beating, but once you start cooking there won’t be time to wash it again. So keep several whisks on hand.” [7]The Curious Cook. Page 109.

“Beat together the yolks, water, and lemon juice or vinegar very thoroughly. Pour the mixture into a glass bowl, cover the bowl with a plate, and heat it in the microwave at high power until you can see the surface of the mixture begin to heave and bubble: for a 2-yolk mixture, this takes between 30 seconds and a minute in my 600-wattt oven. Continue the cooking several seconds beyond this point. Then remove the bowl. The mixture will look quite ugly and curdled. Beat it vigorously, however, and it’ll become creamy. At this point, I find that the temperature of the mixture is between 160 F and 180 F (71 C and 82 C): only portions of it have been heated to the boil. Resume heating the bowl until the mixture begins to heave again: maybe another 15 to 20 seconds. Cook several seconds more, then remove the bowl and beat the curdled mixture until it’s creamy. Its temperature is now around 200 F (93 C). Cover the bowl and let it sit for a minute. All told, the yolks should spend a minute or more above 180 F, which will almost certainly leave them salmonella-free. Then beat the yolks again [and proceed with use in your recipe.]” [8]The Curious Cook. Page 110.