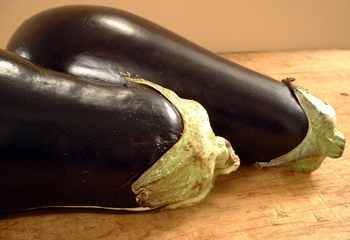 Technically, Eggplant (aka Aubergine) is a fruit — a berry, in fact, though that knowledge won’t get you very far at the grocery store if you bluster about why it’s not next to the kiwi.

Eggplants are related to the tomato and potato, which are in the same family — the nightshade family. There are actually male and female Eggplants. Male ones have fewer seeds and shallow, round indents on their bottoms; on female bottoms, the indent is deeper and more like a line.

Eggplants need to be harvested as soon as they are ripe; if left past that on the plant they get spongy and bitter.

The most familiar Eggplants to us, the large dark purple ones, are called “Black Bell” or “Purple Globe.” They’re also called Globe Eggplant, Western Eggplant and American Eggplant. It’s not known who exactly it was that thought this Eggplant was shaped anything like a globe.

The long, slim light purple ones, mostly used in Asian cooking, are a bit sweeter, have thin skin and fewer seeds.

White Eggplants are better for baking, steaming or frying because with their tougher skin, they hold their shape better.

Choose a Eggplant that feels plump, firm, and heavy for its size. Many jokes are made by men about their volunteering to look after this part of the shopping. To test ripeness, just press in a bit with a finger or thumb — if you can’t press at all (without a lot of effort), the Eggplant is not ripe. If it doesn’t bounce back, it’s overripe and may have mooshy spots inside. If you can make a little indent that lasts for a second then fills back out, then it’s fine. Don’t buy any that sound hollow inside if you knock on them, or that have bruised, soft or brown spots.

Two-thirds of the world’s eggplant is grown in New Jersey, USA.

When cut, Eggplant slices will brown quickly. This is generally not a problem in most recipes, as the Eggplant very often gets browned anyway, and the browning does not affect the flavour, but if it’s something you wouldn’t want in a particular recipe, put the slices in acidulated water.

That being said, modern eggplants have had most of the bitterness bred out of them, so the worries of bitterness are largely a thing of the past. Many older recipes had you salt your Eggplant first, and let it sit for a while before using so that the salt could draw out the bitterness. You will now no longer notice a taste difference in bitterness between Eggplant that has been salted, and Eggplant that hasn’t been, unless the Eggplant is very old and almost past it (see Storage section below.)

To be fair, there can still be a use for salting. Salting helps to remove any excess moisture that might make the Eggplant fall apart on you, if that’s not what would be good for your recipe. After you have salted it and let it sit, though, remember that part of the purpose of this was to get rid of moisture, so don’t wash the salt off with water or the Eggplant will suck the water back up; instead, wipe the salt off with paper towel. Drawing out the moisture also makes the flesh of the Eggplant denser, so that it will absorb less fat or oil (though some bon vivants no doubt feel that the way Eggplant absorbs fat and oil is one of its most redeeming qualities). Use about ½ teaspoon of salt per pound (250 g) of Eggplant.

To remove moisture without using salt, steam blanch slices of eggplant instead. The book Putting Food by says, “Because most people are watching their sodium intake, we opt for steam-blanching without any salting to drawout juice (blanching also reduces oxidation).” [1]Hertzberg, Ruth. Putting Food By: Fifth Edition (p. 240). Penguin Publishing Group. Kindle Edition. The suggested steam blanching time is 2 minutes for thin slices (or diced); 5 minutes for thick slices.

When frying Eggplant, use a non-stick pan — you’re just going to be completely defeated otherwise. Have the pan very hot before you begin frying. Use no more than 1 tablespoon of oil for pound (450g) of Eggplant that you’re working with. If all the oil gets absorbed, don’t panic and add more — soon, the Eggplant will release it again. An Eggplant is a bit like a sponge in structure, and as such is ideal for soaking up water and oil. When heated past a certain point, though, the sponge structure breaks down and releases back all the oil and water it has soaked up.

To barbeque, grill or broil Eggplant, cut very small ones in half, cut larger ones into rounds ¾ inch thick (2 cm). Brush each side with oil, cook 8 to 10 minutes per side, turning often. When done, the Eggplant will be brown and tender. If you are broiling or grilling very close to the heat, 4 minutes per side may do it.

Be wary of leaving sliced Eggplant, whether raw or cooked, on fine or old china dishes overnight, as it may stain your crockery permanently.

Lemon juice may help to remove eggplant stain from knives and hands.

You can use any kind of Eggplant interchangeably.

Eggplant is not particularly nutritious. Its main benefit is that on its own, it’s low in calories, yet high enough in fibre to still be filling. As for any other nutrients touted for it, it really only has them in negligible trace amounts.

Store fresh Eggplant in fridge in plastic bag for up to 5 days. Towards the end of that range, it may start to taste bitter.

To freeze, you need to blanch it. Prepare only enough Eggplant for one blanching round at a time, as it will go brown otherwise. Peel the Eggplant, and slice ⅓ inch (1cm) thick. Blanch for 4 minutes in boiling water containing roughly ½ cup (4 oz / 125ml) of lemon juice per gallon (4 litres) of water. Plunge into cold water to cool. Then drain well, pack, and freeze.

Eggplant is native to India. The Chinese were using it by at least the 400’s, though the Greeks and Romans don’t seem to have known of it.

The Arabs brought it to the Mediterranean during the Middle Ages, and to Spain by the 1100s.

North Americans and Brits knew of eggplant in the 1800s, but didn’t know what to do with it. Until the 1950s, eggplant in North America and Britain was somewhat regarded as an ornamental plant.

A black dye can be made from the skin of purple eggplant. At one time in the Orient, it was fashionable for women stain their teeth with this dye.

The first Eggplants in the English-speaking world grown were grown as garden ornamentals, with white and yellow fruit about the size of eggs — thus the name, Eggplant. You can still buy — or grow — these varieties today, called variously “Garden Eggs Eggplant”, “White Egg” or Osterei.

“Did you know that New Jersey grows about 66 percent of the world’s eggplants? It’s true! The majority of eggplant production is located in South Jersey, especially Gloucester, Cumberland, Salem and Atlantic counties, and smaller production sites are also located in Monmouth and Burlington counties. Production is mainly for wholesale shipment to the eastern U.S. and Canada, depending on the time of year. A small volume of eggplants is produced in the northern part of the state for roadside stands and farmers markets. [2]Napolitano, Pete. New Jersey is eggplant capital of the world. Daily Record: 14 July 2015.

North Americans call this eggplant; the British and the French use the word “Aubergine.”

The word “Aubergine” comes from the Arabic “al-badinjan”. The word “eggplant” comes from the small, white kind, which look like eggs (see entry on Garden Eggs Eggplant.) That was the first variety that English-speaking people saw. Now, the small white ones are a rarity that astonish supermarket shoppers when they do make an appearance.