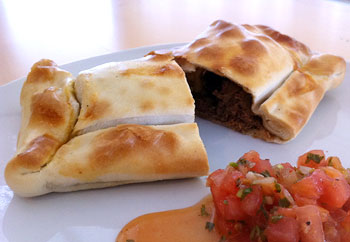 Contents hide
Empanadas could be described as very small turnovers, the Latin American version of Russian “pyroshki”, which in turn are baked versions of East European “perogy.” Or, you could think of as like a samosa, or very small versions of Cornish Pasties or calzones.

Empanadas are most often half-moon shaped, with the rounded side being crimped, though other shapes are made as well. The usual size is for a single-serving that can be eaten in 2 to 4 bites. They often contain fillings such as ground beef, fish, or cheese and chilies, though other fillings such as corn, spinach, boiled eggs and raisins are also common. The filling doesn’t even have to be a savoury filling. An Empanada can be filled with fruit, too, like a turnover and used as a dessert. Whatever filling is used, though, it needs to be highly flavourful, as only a little bit is used in each Empanada.

Empanadas can be fried, deep fried, or baked. The fried ones are meant to be eaten hot right away. The baked ones, called “empanadas al horno”, can be cooked in advance and reheated, or can be eaten cold.

Empanadas are made all throughout Latin America. The crust is usually made from wheat flour, salt, water and a fat such as lard, shortening, butter, or margarine. Sometimes it may be seasoned.

Because of the work involved, Empanadas are often now made only for special occasions. To lessen the workload, many people now buy the dough ready to use as something called “Empanada shells” (“tapas de empanadas”.) This is frozen, and needs to be thawed in the refrigerator before use. It is available at Hispanic stores and markets. Brands will differ — the “La Salteña” brand from Argentina is a bit more like a flaky phyllo pastry than a solid dough more typical in the Mexican versions.

In Latin America, different sizes are also made. Bocaditos or Empanaditas are very small Empanadas used as pick-up appetizers. They are about the size of a piece of ravioli and are meant to be eaten in 1 bite. In Spain, single serving size Empanadas are also made. They are called “empanadillas”, meaning “little Empanadas.” They are served as tapas.

Much larger ones meant to serve several people are versions of the Spanish dish called Empanada Gallega.

Empanadas are a Spanish dish brought to Latin America by Spanish immigrants.

Empanada comes from the Spanish verb “empanar”, which literally meant to put something in bread (with the “pan” part in the middle being “bread”), but which actually means now to put something in pastry or some form of dough for the purpose of cooking it.

Sephardic Jews call a (Spanish) Empanada a “tapada”, meaning, “with a lid.”