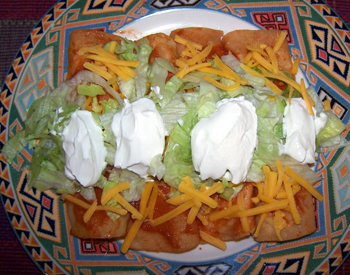 Contents hide
In Mexican cooking, Enchiladas are usually small appetizers (“antojitos”); in Tex-Mex cooking, they are made larger and are part of a main course.

They are like baked, stuffed crêpes that are covered in a sauce, though sometimes they are not rolled up, but made layered one on top the other with the filling in between each layer.

Instead of crêpes, flour or corn tortillas are used. The filling can be chopped or ground meat, cheese, veg or any combo. Any cheese used needs to have a strong enough flavour that will come through all the other ingredients. The sauce can be a cream sauce, or it can be a green sauce made from tomatillos, or a red sauce made from tomatoes. The green and red sauces will be flavoured with chiles.

The tortillas are fried lightly for a few seconds in oil, then dragged through a hot tomato sauce (usually a mole sauce, but sometimes a chile sauce), then stuffed with cheese and onion, rolled and served as is, without baking. Often Chihuahua cheese is preferred.

Enchilada comes from “enchilar”, meaning to cover with chiles. The word first appeared in print in 1885.

This web site generates income from affiliated links and ads at no cost to you to fund continued research · Information on this site is Copyright © 2022· Feel free to cite correctly, but copying whole pages for your website is content theft and will be DCMA'd.
Tagged With: Mexican Food, Tex-Mex Food