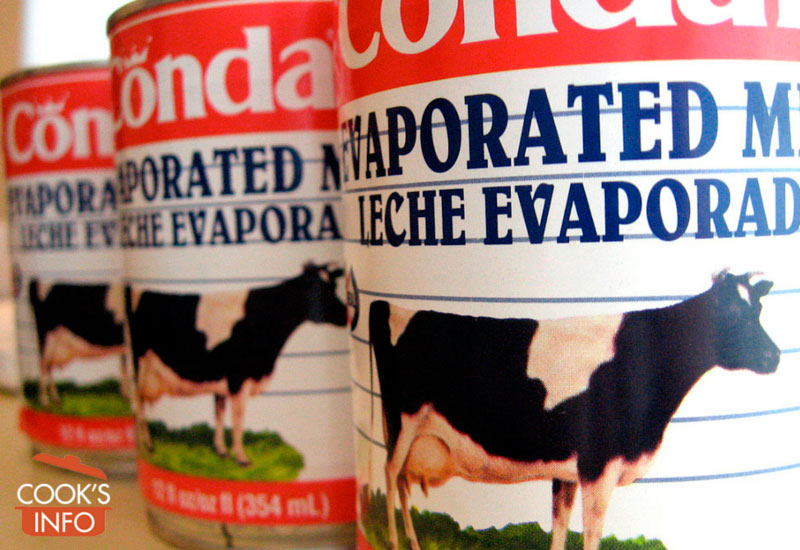 Contents hide
Evaporated Milk is a thickened form of milk made by putting milk under a vacuum and removing half its water. It is then homogenized, sealed in cans and sterilized through the canning process.

Some people like it in their coffee, but it is primarily used for cooking.

Evaporated milk can also be called “condensed milk.” British recipes, for example, are more likely to refer to “condensed milk.” Don’t confuse this, however, with Sweetened Condensed Milk. That is a different matter altogether.

Cans of evaporated milk are sold with their contents measured either in weight (oz / g) or in volume (oz / ml.)

In North America, you are likely to see it only in cans; in the UK, it is also sold in tubes as well for using just a bit at a time when you need it.

It can be whipped with electric beaters.

Or, put twice the amount of fresh milk that you need in a saucepan, and let it slowly simmer until only half remains in the saucepan. This will take time. Be careful not to burn or carmelize the milk.

Or, just use the same amount of cream (makes the recipe more fattening.)

Evaporated milk can be used as a substitute for cream in many recipes, helping to reduce the fat content in them. 250 ml (1 cup) of heavy whipping cream adds 24 Weight Watchers PointsPlus® to a recipe; the same amount of whole evaporated milk adds only 9 points.

Makers of evaporated milk advise against freezing it.

In 1822, in France, Nicholas Alpert condensed milk with a double boiler, but it had a scorched taste. In 1835, Englishmen William Newton proposed using lower temperatures to evaporate milk. It was a Texan, though, who finally solved the problem: Gail Borden (1801-1874). Starting in 1853, Borden experimented with slowly evaporating milk in a vacuum in a copper kettle so that it would not scorch. He received his American patent for the process on 19 August 1856, and opened a factory in Connecticut, USA in that same year. He produced only sweetened milk (aka Sweetened Condensed Milk) until 1892, at which time Borden finally added plain to their line.

The development of allowed milk to have a far longer shelf-life and to travel better, at a time when refrigeration and refrigerated transport was not available. Prospectors in the Yukon Gold Rush took with them.

The history of the Carnation brand of evaporated milk starts with a man named Elbridge Amos Stuart (1856 – 14 January 1944). He was born in Guildford County, North Carolina into a Quaker farming family. By 1894, he had moved to Los Angeles, becoming a partner in a wholesale grocery firm there called Craig, Stuart and Company.

Sensing an opportunity in the burgeoning field of milk preserved in cans, in 1899 he moved north to the town of Kent in Washington State to found, along with a business partner (possibly the man named Craig from the Los Angeles venture), the Pacific Coast Condensed Milk Company. At the time, Kent had only been a city for 10 years, having incorporated in 1889 and changed its name from Titusville. (Stuart bought the Titusville hotel there for $5,000 and converted it into the processing plant for his milk). The area around Kent had originally hoped to specialize in hops for brewing, but when the hop crops failed in the 1890s, the farmers turned to dairy instead — no doubt a factor in Stuart’s choice of location. Another factor was that someone else had tried and failed to start an evaporated milk business in Kent, which Stuart bought out to help in getting him started.

In amidst all the other start-up tasks that Stuart would have had, he had to come up with a name. Urban legend has it that the inspiration for the name “Carnation” came from the name of “Carnation cigars” that Stuart saw in a shop window in Kent. At the time, other milk products were being named after flowers, and Stuart thought the name “Carnation” would apply better to foodstuffs than to tobacco. And so, “Carnation Sterilized Cream” came into being as the product name.

Stuart and his business partner had working for them a Swiss man named John Baptist Meyenberg, who understood the process well. Meyenberg had originally worked for the Anglo-Swiss Condensed Milk Company in Switzerland. The company made canned sweetened condensed milk. In 1866, Meyenberg proposed to them that they make unsweetened condensed milk (aka evaporated milk). He had discovered that condensed milk would last even longer if it were sterilized first by heating it to 248 F / 120 C in a closed container, and that if it were sterilized, it could even be canned without the high added sugar levels in it to preserve it. The company rejected the idea.

Meyenberg moved to the United States and in 1884 patented his sterilization process for milk in St Louis, Missouri. By 1885, he was living in the town of Highland, Illinois, and founded his own company there, the Helvetia Milk Condensing Company, by talking the townspeople into becoming shareholders. By 1885, he had successfully canned unsweetened evaporated milk, calling it “Highland Brand.” In parts of America it was sold under different names such as “Tulip” and “Blue Grass”, 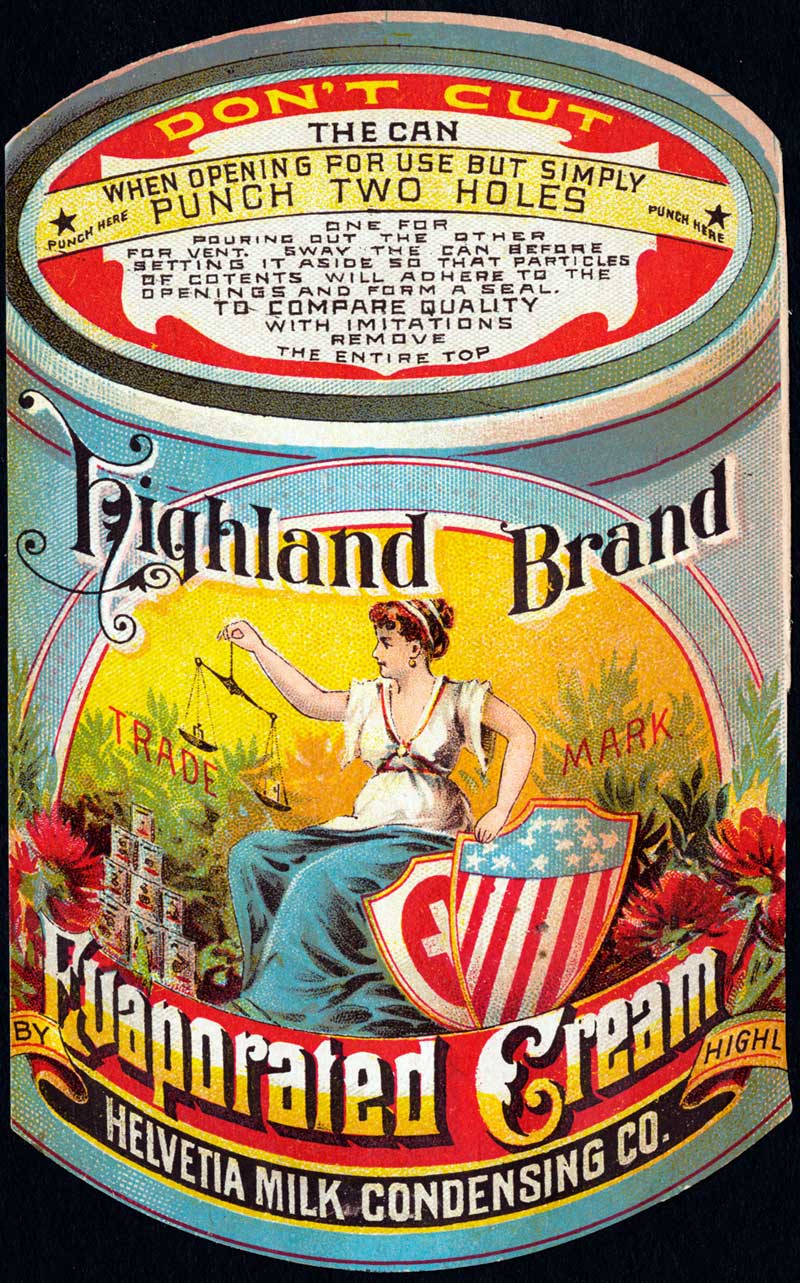 In 1886, though, merchants were complaining that half of Meyenberg’s Highland milk was spoiling on their shelves. Some of the shareholders in the company blamed Meyenberg’s sterilization process. Meyenberg blamed it instead on faulty cans, and left the company, this being the last straw for him in a string of grief that even included the company’s steam-powered equipment having blown up in July 1885, rocking half the town.

The company continued without him. In 1895 they renamed the canned evaporated milk to “Pet”, and eventually renamed the company itself to “Pet Milk Company”. By 1995, Pet Milk belonged to Pillsbury, and as of 2005, it was part of the The J.M. Smucker Company.

In any event, Meyenberg was free of his obligations to Pet, and in 1899 was available to help Stuart set up shop in competition to Pet. One of Stuart’s ideas was that milk canned in machine-made cans lasted longer and better than milk canned in hand-made tins (which were still being produced at the time). This idea would have jived with Meyenberg’s thinking that it was faulty cans that caused his earlier failure. Stuart paid Meyenberg $25,000 for his patented process and to assist with the new milk product.

Besides the quality of the cans, Stuart was convinced that top quality milk from top quality cows was absolutely vital in the success of his product. In 1907, he introduced the slogan, “Carnation Condensed Milk, the Milk From Contented Cows.” The idea behind the slogan was that happy cows (purebreds, fed wholesomely and living and being milked in clean conditions) would produce higher-quality milk.

In 1908, he purchased and then sold to his milk suppliers 72 registered Holstein bulls in order to help them improve the milk quality of their herds. In the same year, Stuart set up a farm 35 miles outside of Seattle in the Snoqualmie Valley to build up his own herd of Holstein cow breeding stock. He wasn’t happy with the state of the farm, however, (the barn had a dirt floor, and only 50 of the 360 acres were even cleared farmland); it wasn’t until 1912 that he brought in his first herd of 250 purebred, registered Holstein cows. His aim was to be able to continually supply bulls for breeding purposes to the farmers who produced his milk, as well as doing research on milk production. The farm he set up still exists, though now it’s a training centre for Nestlé.

The Carnation brand milk would become so famous that the Pacific Coast Condensed Milk Company later changed its name to match that of the product, becoming the Carnation Milk Company.

In 1954, Carnation entered the powdered milk market, but it didn’t enter the sweetened condensed market until 1988.

In 1985, Carnation was bought by Nestlé for 3 billion dollars (US).

As for John Meyenberg, he helped for a while with the development of the Carnation farm, and possibly the breeding and research there. Later he moved south to California, and started the Meyenberg Bros Milk Company sometime before 1921 (a plant was built in Ripon, California in 1921). In 1934, he was the first in America to produce evaporated goat’s milk. The Meyenberg Bros Milk Company company continues as of today (2005) in Turlock, California, specializing in goat milk products such as evaporated and fresh goat’s milk, and goat’s cheese.

“The superior flavor of Carnation Milk is merely that of rich, whole milk, unusually delicious because of the favorable climatic conditions peculiar to the north Pacific coast, where Carnation Milk cows, healthy and contented, are pastured all the year. These conditions and the extreme care and promptness exercised in handling, cooling and sterilizing, combine to make Carnation Milk nutritious, safe and tempting to the delicate appetite.” — Carnation Evaporated Milk American newspaper advertisement, 1909.