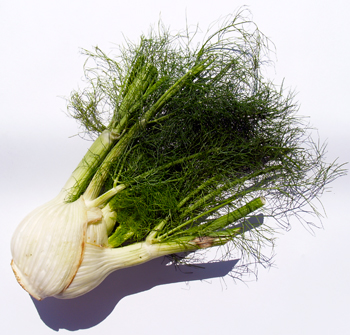 Fennel is a very versatile garden plant. It is used as a vegetable, as an herb, and as a spice.

The base, “bulb” part of Fennel has a crisp texture and a very mild liquorice taste, but mild enough so that many people who don’t like liquorice don’t seem to mind Fennel.

Fennel can grow 3 to 5 feet tall above ground (1 to 1 ½ metres.) The bluish-green leaves, called “fronds”, are as feathery as dill leaves are. When Fennel is allowed to flower, it will produce yellow blooms. The plant will behave like a perennial where the winters are mild. In fact, only in its second year will it produce a lot of flowers and seed.

All of Fennel is used: the fronds, the stalks, the bulb and the seeds. The base looks a bit like celery, in that it is the base of the stalks all clumped together,and is a whitish pale green. It is often called either the bulb or the root, though it is neither.

There are two main varieties of Fennel. One, developed mainly for production of Fennel seeds, is called Sweet Fennel (“Foeniculum vulgare var dulce”); the other, developed for eating in its own right, is called Florence Fennel (“Foeniculum vulgare var. azoricum.”) Sweet Fennel is treated as a perennial and left in the ground to produce seeds. Florence Fennel is treated as an annual, with the entire plant being pulled out for eating.

Fennel is related to parsley, dill, celery, celeriac and carrots. Dill and Fennel can even cross-pollinate, if they are planted too closely together.

Wild Fennel is (aka “Foeniculum vulgare Mill.”, aka “Finocchio selvatico” in Italian.) In Sicily, it’s used particularly in sardine and pasta dishes. [1]

Choose Fennel that is firm with fresh tops. There is no real taste difference between large or small bulbs.

Fully grown Fennel: Wash, trim bottom of bulb. Trim off the stalks. Cut into quarters for cooking with, or slice for use fresh.

The leaves can be chopped and used as a fresh herb. Slice bulb thinly to use raw in salads.

Fennel braises and roasts well. The stalks are a bit tougher to eat raw than the base, but they can be braised or steamed.

Microwave cooking is particularly kind to Fennel. The Fennel will retain more of its colour and flavour.

The green fronds can be used as decoration.

For chopped Fennel root, use celery.

Store refrigerated in plastic bag. The leaves will keep for a few days; the bulb for up to a week.

Fennel was grown by the Egyptians. The Romans had a popular belief that Fennel would help you lose weight, much the same as our modern day myth about celery.

The Roman writer Columella gives a recipe for Fennel: “Mix Fennel with toasted sesame, anise, and cumin then mix that with puréed dried fig, wrap in fig leaves and then store in jars to preserve.”

Above the lower plants it towers,
The Fennel with its yellow flowers;
And in an earlier age than ours
Was gifted with the wondrous powers
Lost vision to restore.
— Henry Wadsworth Longfellow

“Foeniculum vulgare var dulce” is the variety grown for its seeds.

This web site generates income from affiliated links and ads at no cost to you to fund continued research · Information on this site is Copyright © 2022· Feel free to cite correctly, but copying whole pages for your website is content theft and will be DCMA'd.
Tagged With: Ancient Egypt, Fennel, Vegetables