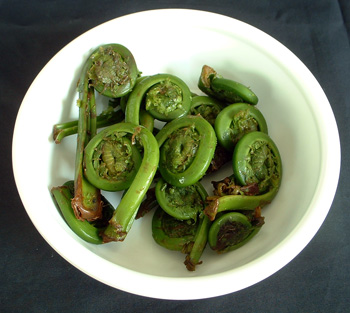 A fiddlehead is the top of a fern when it first pokes through the ground in spring, curled up like the head of a fiddle. They are only available for 3 weeks in May. They are still mostly gathered from the wild, though commercial production is being explored.

The most popular fern to harvest them from, and the one that is deemed the safest, is the Ostrich Fern. (see Nutrition below.) Ostrich Fern fiddleheads will have on them brown, damp “chaff” that feels papery or “fuzz” that feels like down.

Fiddleheads are very popular throughout Asia and the Pacific, particularly in Japan and in Korea, and popular in eastern parts of North America. In Asia they are cooked; in Hawaii, just parboiled.

When buying fresh fiddleheads, choose luminous, bright green ones that are small — no more than 5 cm across and 5 cm tall (2 inches x 2 inches) including the stalk.

Fiddleheads can also be bought canned.

Fresh, they only have a shelf life of about 3 days.

Trim stalks to ¼ inch (½ cm). Rub any scales or brown fuzz off, and rinse.

These are the only two acknowledged safe ways and times by food safety experts to cook fiddleheads, to leech the toxins out. Besides, they really do need the full cooking times to bring the flavour out.

Afterwards, you can do further cooking such as sautéing, etc, or simply serve garnished with lemon, butter or a vinaigrette.

To be clear, if you are planning to sauté or otherwise cook them, you must still steam or boil them first to leach any toxins present in them out. The boiling or steaming for the prescribed times are required food safety steps.

The fern that most sources identify as safe is the Ostrich Fern (Matteuccia struthiopterus.) If you are picking your own, you need to make sure of the fern varieties you are harvesting, as not all are safe to eat. Do not eat any fern past the fiddlehead stage, or if the fiddlehead has started to turn purple or black [2], as it can be poisonous. Make sure you fully cook them, as there are reports of some food poisoning in some degree from undercooked fiddleheads, even Ostrich Fern fiddleheads.

Some experts advise not to eat any fiddleheads at all.

Health Canada advises to discard any steaming or simmering water that you cooked fiddleheads in, as toxins may have leeched into the water. Health Canada and the American CDC both advise the cooking time of 15 minutes for boiling, and 10 to 12 minutes for steaming, to leech out the toxins.

Store in airtight container in fridge and use within 2 days. Otherwise, freeze uncooked for up to 6 months.

There are no safe, tested recommendations for home canning plain fiddleheads, but the University of Maine Extension Service has developed some recipes for pickling fiddleheads.

In Asia, fiddleheads have been consumed for centuries. In North America, the Indians taught the newly-arrived colonists that they were edible.

This web site generates income from affiliated links and ads at no cost to you to fund continued research · Information on this site is Copyright © 2022· Feel free to cite correctly, but copying whole pages for your website is content theft and will be DCMA'd.
Tagged With: American Food, Canadian Food, Ferns