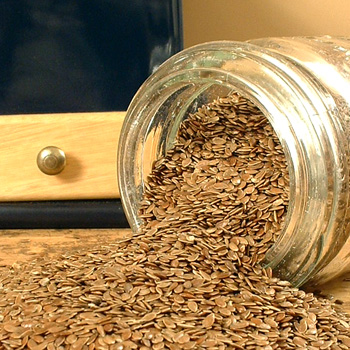 Flax is a grass plant (sometimes referred to as a reed.)

It has small, narrow leaves about 1 inch (2 ½ cm) long, and blooms in 1 ½ to 2 months after growth starts. It produces five-petaled, self-pollinating flowers over a period of 15 to 25 days. The flowers open before sunrise, and only last until noon. Blue flowers (a true blue, not purple) are the most usual, though white, pink and purple are also seen.

Each flower produces 6 to 8 seeds, sometimes 10, that grow inside “bolls” on the stems about ⅓ inch (8 mm) wide. The seeds are ready to harvest 30 to 40 days after flowering. Generally, they are ready to harvest when the lower stalks start to turn yellow. Even if there are still a few flowers and green leaves at the top of the plant, you aim for about 90% of the seed bolls being brown.

The seeds are used as a grain. The seeds are glossy and usually light brown, but they can be darker brown to almost black, yellow, greenish-yellow or greenish-brown.

The seeds are about 40% oil, and become very sticky when wet (there is mucilage in its seed coat.) When not wet, they are very slippery. Individuals standing on large amounts of flax seed in storage silos have been known to sink into it rapidly and suffocate beneath the seed.

The seeds can be used to add texture to baked goods. If you’re adding the seeds to muffins or sprinkling them on top of baked goods for nutritional benefits, the seeds should be crushed first to allow the nutrition to get out during digestion. Sprinkled whole on top, it’s really just a decorative garnish with no nutritional value.

Soak them first before using them as a garnish. Soak in water 10 to 120 minutes (called “conditioning the seeds” by professional bakers.) If any water is called for in your recipe, you can then use the soaking water. Afterward, you need to apply some kind of wash to your baked good to help them stick on.

The stalks have a bark on the outside, and inside, layers of fibre surrounding a woody centre.

The fibre can be used for to make cambric, damask, linen, lace, twin, rope, and paper for currency.

If Flax is being harvested for its fibre, it is ideally harvested before seed develops. The ancient Egyptians, in fact, preferred to harvest it while the plant was still in bloom. Flax grown for its fibre tends to be very closely planted — this over-competition for nutrients causes the stalks to be slender and straight, with very fine fibres.

To harvest, plants are pulled up by their roots rather than cutting (cutting damages the fibres.) The stalks are allowed to dry in bundles, root end down. Any seed pods are pulled or raked off with a “rippling comb.” Then, the stalks needs to be “retted” – allowed to rot so that fibres inside the “bark” are exposed. This can be done by moistening the bundles continually over 1 ½ to 3 weeks, especially good in damp, rainy climates, or by actually placing the bundles in water — ponds, rivers, bogs, or vats on the farm — and held under by weights. This method is faster, requiring only 7 to 10 days, but it does pollute the water. Henry VIII passed a law forbidding retting flax in any water where livestock drink. In Belgium, the Lys river got so polluted by the retting that the water took on a gold colour.

Flax retted by being moistened (“dew retting”) will produce yellowish-brown fibres; flex retted in water will produce grey fibres, unless it’s running water, in which case the fibres will be a light-yellow.

After retting the stalks are then dried, then beaten with wooden or cork mallets to finish breaking any remaining portions of the outer bark. Throughout the process, the bundles are kept root-end down.

The fibre is then scraped free (called “scutching” or “swingling”) and completely cleaned of any remaining bits of debris in it by combing them with “hackles” in increasing degrees of fineness. Two kinds of fibre result from the combing: the shorter, coarser fibres that get stuck in the combs are called “two.” The longer, finer — and therefore more desirable ones — which don’t are called “line.”

Then, the fibre is spun in a counter-clockwise direction.

Flax is high in omega-3 fatty acid (aka alpha linolenic acid), though not as high as hemp oil. It is high in potassium, omega-6 and omega-9.

The seed is being fed to chickens so that the eggs they produce can be marketed as being high in omega acids.

Flax is being proclaimed as a “wonder cure-all” food by many people in the health foods business. But, the seeds only really add nutrition if they are broken or ground — the seed coat on whole ones usually allows the seed to pass through the human digestive system completely untouched by the digestive process. So unless the whole seeds are thoroughly chewed, there is no nutritional benefit at all.

Store whole seeds at room temperature for up to 1 year.

Flax has historically been grown as a cash crop, to produce fibre for cloth, and oil for non-food uses.

Flax possibility originated around the Mediterranean. By 1000 BC, it was being grown in North Europe.

Linen production (and consequent growth of flax) began to decline after the invention of the cotton mill in 1793 made it more profitable to grow cotton. Early in the 1900s, those still growing flax in North America were hit by a wilt disease.

Flax was an important cash crop in what is now Northern Ireland, particularly County Longford. While people grew other crops to feed themselves and their animals, flax was their cash crop. The shorter growing season in Northern Ireland favoured harvesting the flax younger for its stalks, rather than waiting on the seeds to develop. It grown and harvested during the summer. It was harvested while still in bloom — in fact, within about 3 days of the flowers appearing. Then, it was spun and woven into quality linens during the winter. Northern Ireland is still known for the quality of its linens, but now linen is a specialty item owing to cheapness of cotton from the Developing Word. Up until the latter half of the 1700s (when sulphuric acid, potash and lime the chemical came into usage), cow manure and buttermilk were used to bleach it white.

This web site generates income from affiliated links and ads at no cost to you to fund continued research · Information on this site is Copyright © 2022· Feel free to cite correctly, but copying whole pages for your website is content theft and will be DCMA'd.
Tagged With: Northern Ireland Food, Seeds