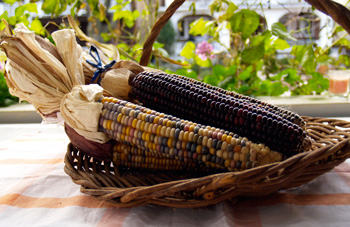 Flint Corn is a very hard corn whose kernels can be white, red or blue or orange or brown, all on the same cob of corn.

The kernels have a very small endosperm; they are mostly “grain.”

Varieties which are predominantly blue are called “Blue Corn.”

Flint Corn today is grown for livestock feed, and for use as ornamental decorations for the autumn holidays in North America, when it generally tends to be thought of as “Indian Corn.”

The Indians used Flint Corn primarily as a grain to make flour from; it was never used by them as a vegetable for fresh-eating.