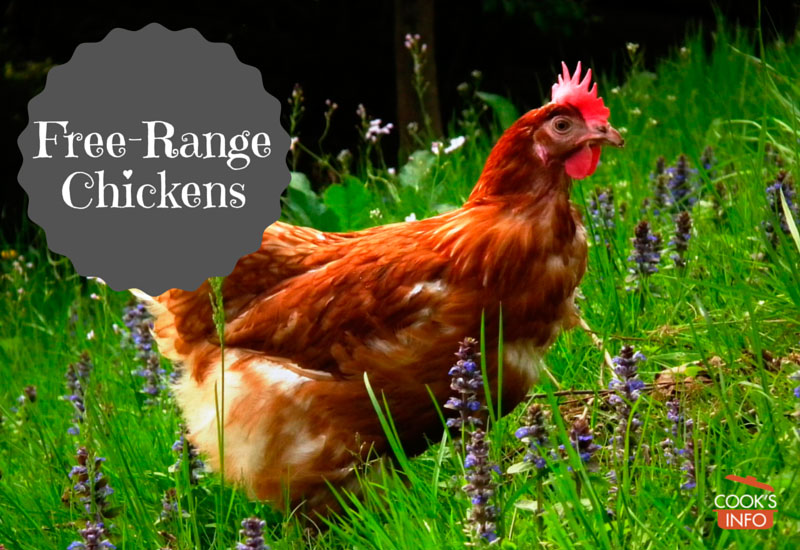 Free-Range Chicken is a term that doesn’t actually have much if any meaning.

Though it conjures up images of one or two chickens pecking about on the lawn in the back garden, it can mean:

An acre of grass can only handle the droppings from about 80 chickens a year. With numbers above that, the grass will just die and become mud.

Others add that, owing to chickens also scratching at the grass, a more realistic number is just 50 chickens per acre, which means around 75 square metres (800 square feet ) per bird. 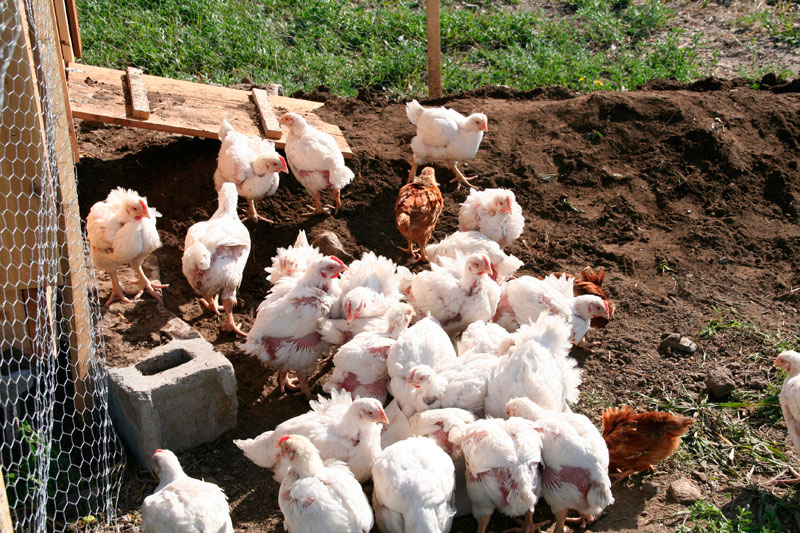 The reality is that grass can quickly disappear under large numbers of chickens.
© Kelly Taylor-Faye / pixabay.com / 2009 / CC0 1.0

Even if all that space is provided, the problem is that chickens won’t roam far away anyway from their roosting area, even if the weather is good, so it is hard to get them to actually spread out that far. Consequently, “true free range” on “nice” grass is pretty much impossible without portable hen houses. Some farmers with small flocks of chickens have their chickens live in small huts that are moved on a regular basis, allowing the hens access to fresh, clean vegetation and allowing the ground where they previously were to recover. But this may not be practical for large producers.

The chicken that appears to get the most free-range space is a Bresse chicken — about 10 square metres (108 square feet) per bird.

Another problem for producers in trying to achieve Free-Range is something that consumers don’t think about, but which producers call “biosecurity risks” — no, not terrorists, but rather good old-fashioned foxes.

For these and a variety of other reasons, Free-Range has become somewhat of a debased term. Consequently, some producers have abandoned the term to distinguish themselves, and moved to the term “pasture raised.”

Others have given up trying to connote outside, and use the term “free-run” — indicating that chickens are allowed to roam freely inside the barn.

The term “Free-Range” is not restricted in usage, though, to chickens. Pork, beef and sheep producers are also now using the phrase, along with “free roaming.” The United States Department of Agriculture (USDA) began attempts in 2003 (under Docket No. LS-02-02) to define the term for these industries. Issues they encountered included considering pigs raised in states that have a full and proper winter for 6 months of the year. In such a climate, even though the pigs might have access to go outside, they more often than not choose not to because it is cozier inside. If the pigs are born at the end of fall and sold onto the market at six months of age, the pigs may have chosen to never step foot out into the cold. 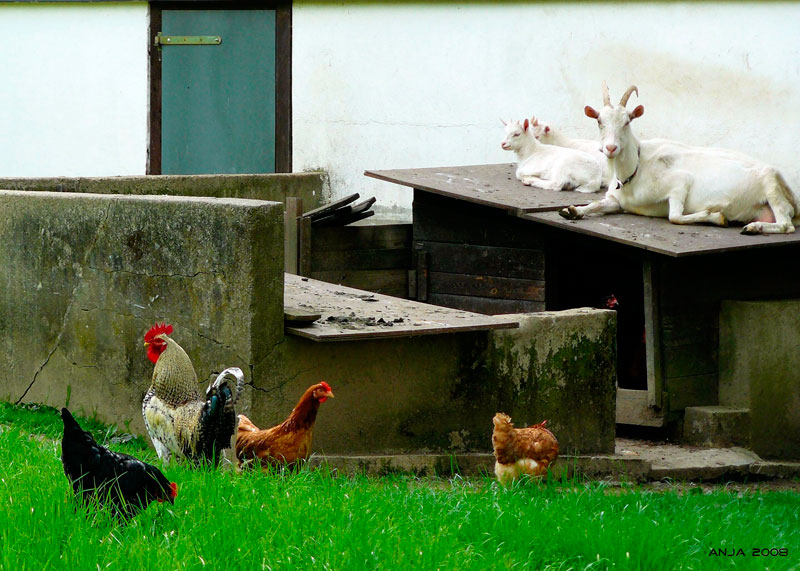 Free-Range Eggs, laid by hens that have “Free-Range”, in theory have darker yolks because of the variety of food (e.g. bugs) they are eating. This isn’t always the case, though: the roaming grounds may be so septic that no bugs can even live there. To help deliver these darker colour yolks that are expected, special food can be given to the chickens.

The quality on Free-Range laid eggs isn’t necessarily higher. It is harder to collect eggs, because the eggs can be laid anywhere, and the eggs may be hidden, and when you do find them, you may have no idea of when they were laid. It is also more work to monitor the quality of the eggs, particularly if the ground they were laid on is fouled with droppings.

Australia has a national legal definition of free range. The chickens must have indoor shelter with access to the outdoors for 8 hours a day, weather permitting. The birds must have access to shelters from rain and sun, and have windbreaks. The outdoor range area must not be mud. Maximum for laying hens is 1500 birds per hectare,

Free-Range chickens are less than 1% of the chicken market in America.

In America, the term just means that they have access to the outdoors. There is no requirement beyond that. There are no requirements as to outdoor space per bird, or that the outdoor area even have vegetation in it — it could be a fenced-in yard completely covered in gravel. All you can be sure it means is that the birds were allowed some exercise, if they chose to take it or were able to get pass the crowd at the door. The USDA recommends 1 1/2 square feet (.14 square metres) of “free-range” space per bird, but even that small amount is not enforced.

As of 2004, there is no legal definition of free-range eggs in America.

There are no standards yet as of 2004 defining “Free-Range.” The Canadian authorities were watching to see what the USDA does.

In the UK, according to Defra’s “Poultrymeat Marketing Regulations”, “Free-Range” means that the poultry in question are allowed access to the outdoors at least half of the time. They may still be bred from standard fast-growing battery chickens or turkeys, because they are still slaughtered at the standard 41 to 43 days old. Indoors, they may still live in cramped conditions, and the outdoors roaming space will be limited to the EU regulations listed below.

For birds to be sold as Free-Range, the minimum space allotment is:
Per chicken or guinea fowl: 1 square metre outdoors, when indoors no more than 11 roaming hens per square metre;
Per duck: 2 square metres;
Per turkey or goose: 4 square metres.

There is no guarantee, though, that the birds get outdoors — the inside henhouse may be so crowded that only birds near the exit can get out. 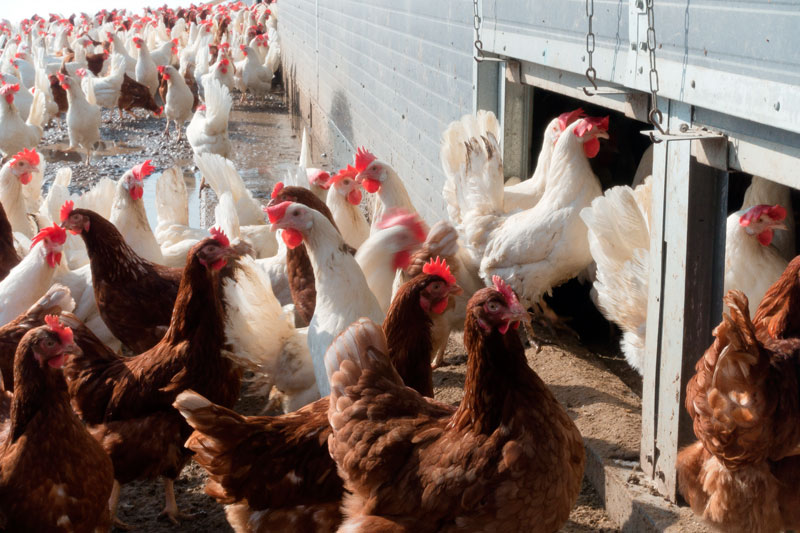 These chickens could qualify as free-range, as they have access to an outside exit.
© Stefan Schweihofer / pixabay.com / 2016 / CC0 1.0

In September 2004, a microbiologist named J. Stan Bailey, who worked for the United States Department of Agriculture’s Agricultural Research Service, reported that 25% of chickens that came to market carried salmonella — and that it didn’t matter whether they were free-range, organic or battery chickens: the number was the same.