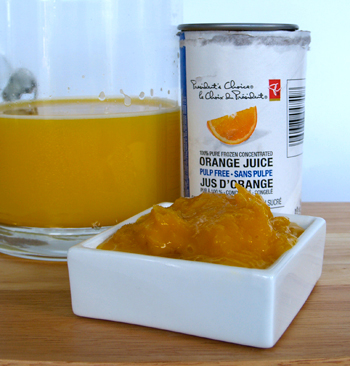 To make Frozen Orange Juice Concentrate, oranges are juiced in great quantities. Heat and vacuum is used to remove some of the water, concentrating the juice.

Different batches of concentrate will have different sugar-acid ratios. The batches will be blended according to the preferences of which company is buying them. The concentrate can then be shipped to the company by tanker trucks or packaged right at the processing plant for them.

The concentrate as sold frozen to consumers is about 3 times more concentrated than regular orange juice.

The industry measures sugar level in oranges with something called the “brix scale.” The brix level of Frozen Orange Juice Concentrate as sold to consumers is about 42; when you add water to make juice out of the concentrate, you bring the brix level down to about 11 or 12.

Most of Brazil’s production of oranges goes to Frozen Orange Juice Concentrate.

When you want to add a really intense fruit flavour to something, without adding a lot of liquid, use the Frozen Juice Concentrate straight up. It’s three times more flavourful than regular fresh fruit juices (make sense — after all, they always have you add 3 cans of water to make up the juice, don’t they?)

1 large can frozen orange juice (the size that is about 355ml or 12 oz by weight) holds 1 ¾ cups of water. Useful to know for when you have to add the standard 3 cans of water to the pitcher, but you’ve botched up the cardboard can in getting it open.

Before the advent of Frozen Orange Juice Concentrate, orange juice was just available commercially in cans.

Concentrated orange juice was first frozen in 1920 in at the United States Department of Agriculture (USDA) Lab in Winter Haven, Florida by a Dr J.E. Crump. The first commercial attempts followed in 1925. The result, however, didn’t taste great — when the water was taken out of the juice to concentrate it, the flavour went with it.

During 1943 / 44, three men — Dr. L.G. MacDowell, Dr. Edwin L. Moore and C.D. Atkins developed an improved process. They concentrated the juice even more, then added back in a small amount of fresh, unconcentrated juice to restore the right look and taste. The patent for the process was approved in 1948, U.S. patent No. 2,453,109, but it was assigned to the USDA to allow businesses to use it freely.

Production took off slowly, as producers evaluated the quality for themselves, and the market. 50,000 US gallons were produced in 1944 / 45, growing to 1.9 million US gallons by 1947 / 48. From there, the figures skyrocketed into the stratosphere with wide consumer acceptance.

“Orange concentrate packed with the liquid sunshine—the health-giving vitamin C—that has been doing war service on the battle fronts of the world is returning to civilian markets, packed in six fluid ounce tins carrying the makings for one and one-half quarts of orange juice, “Sun-Filled” the brand name. The unique method for processing this concentrate was developed several years before the war and introduced for institutional use in hospitals and schools. The item had but made its retail debut when along came the war and the entire output,over a million gallons a year, for lend-lease and the armed forces. Now with government orders relaxing, the Florida producers, Citrus Concentrates, Inc., again are packing the product for the home table. The first shipment is available at Charles & Company, 340 Madison Avenue, the 6-ounce tins selling for 69 cents.”

This web site generates income from affiliated links and ads at no cost to you to fund continued research · Information on this site is Copyright © 2022· Feel free to cite correctly, but copying whole pages for your website is content theft and will be DCMA'd.
Tagged With: American Food, Juice