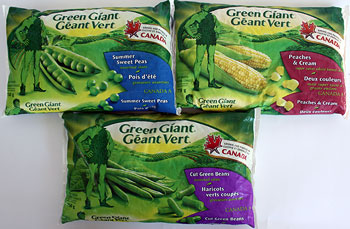 As one American advert said in the 1950s, we can now eat better than any King ever did, because frozen vegetables allow us to enjoy the vegetable of our choice at any time of year, no matter what the season.

To make frozen vegetables, vegetables are blanched, then packaged and frozen. The blanching prevents them from turning brown during freezing and losing more of their nutrients.

Cook frozen vegetables from frozen (except for corn on the cob). If the product has been thawed, then the cooking time allotted should be slightly less than that indicated on the package. Thawing them first can lead to increased Vitamin C loss.

On a nutritional level, frozen vegetables are usually superior to fresh, unless you can see out your window the garden the vegetables came from.

Many people say they won’t eat frozen vegetables, only fresh ones because they aren’t aware of which is actually the healthier option in the reality of urban living far from where the crops are actually grown.

Frozen vegetables are are usually frozen and packaged within 6 hours of being picked. Packers will build processing factories right next to the fields to ensure quick processing right after harvest. Freezing literally freezes the quality of the product in a moment of time, 6 hours old.

“Fruits and vegetables are often the most attractive and health promoting when harvested at their peak maturity, but most Americans do not have home gardens capable of providing the recommended 5–13 daily servings year round. In the U.S., fruits and vegetables grown in North America may spend up to 5 days in transit following harvest before arriving at a distribution center. Transportation time for fruits and vegetables grown in the southern hemisphere for winter and spring consumption in the U.S. ranges from as little as a few days if transported by air freight to several weeks if sent by refrigerated ship. At the retail store, fruits and vegetables may spend 1–3 days on display prior to being purchased by the consumer, who may store them for up to 7 days prior to consumption. This means that fresh fruits and vegetables may not be consumed for a significant length of time following harvest, during which time nutrient degradation may occur.” [1]Barrett, Diane. (2007). Maximizing the Nutritional Value of Fruits & Vegetables. Food Technology. 61.

The frozen versions typically end up reaching the average consumers’ homes way “fresher” and more nutritious than the fresh:

It is technically safe to refreeze frozen vegetables that have thawed, but the taste and texture afterwards often makes it not worth it.

Frozen foods were marketed at first as a luxury food item by General Mill’s Birds-Eye brand, which saw itself as selling premium luxury goods. Their advertisements at the end of the 1940s showed pearl-clad women reclining, enjoying the leisure time they had gained by using frozen vegetables. Other major firms, including Birds-Eye, thought that frozen vegetables would never be as profitable as canned vegetables, so they stay out of the market. This allowed for entry by smaller manufacturers into the market, selling second-grade frozen vegetables but at a price that consumers liked. Consumers began buying those instead of canned goods. This forced the major brands to enter the frozen vegetables market.

The major brands, though, weren’t prepared to compete on lowest price or lower quality vegetables. They launched marketing campaigns about the quality of their frozen vegetables, and educated consumers on how frozen vegetables were usually superior to fresh. Libby’s entered the frozen vegetable market in 1946. Green Giant didn’t enter the frozen food market until 1962.

This web site generates income from affiliated links and ads at no cost to you to fund continued research · Information on this site is Copyright © 2022· Feel free to cite correctly, but copying whole pages for your website is content theft and will be DCMA'd.
Tagged With: Preserves, Vegetables