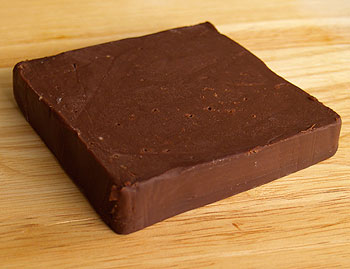 Fudge is a soft, creamy, smooth candy that can be made at home or purchased commercially. It comes in a variety of flavours, with chocolate being the most popular.

The base is sugar, butter, and cream or milk. Some recipes also add corn syrup and additional flavourings. The mixture is cooked until it reaches the soft-ball stage, then beaten or “paddled” until glossy and smooth, and poured and spread into a pan to set.

Fudge should be creamy. If it’s grainy, that can indicate that not all the sugar dissolved.

To judge how well a Fudge has set, you cut a piece off, and look at the area in the pan after an hour. If the space has fudge sliding into it, the Fudge didn’t set properly. It is harder to set Fudge properly at high altitudes.

Fudge will dry out in the refrigerator. Store for short periods of time well-wrapped at room temperature, or wrap well and freeze.

Fudge is an east-coast American invention. Students at Vasser College in Poughkeepsie, New York claimed to have invented it in the 1880s. They were, it seems at least, the ones the popularized it.

The recipe came into the college somehow, possibly through a student named Emelyn Battersby Hartridge. In 1921, she wrote in a letter that she got the recipe from a friend’s cousin:

“Fudge as I knew it, was first made in Baltimore by a cousin of a schoolmate of mine … (and) sold in 1886 in a grocery store for 40 cents a pound. … I secured the recipe and in my first year at Vassar, I made it there – and in 1888 I made 30 pounds for the Senior Auction, its real introduction to the college, I think.” [1]

It’s not certain even from the letter, though, whether Hartridge’s friend’s cousin called it “fudge”, or even whether Hartridge’s college mates called it “fudge” at the time. What’s clear though, based on newspaper articles a few years later, is that by 1895, Vassar students were definitely calling it “fudge” or “fudges”. An 1895 article by an unknown writer in the Boston Globe brought it to the nation’s attention, as the article was reprinted in several newspapers.

The historian’s task now appears to be to follow the trail from Vasser to Baltimore, to see how this friend’s cousin might have come into the recipe.

[1] Letter written in 1921 by Emelyn Battersby Hartridge. Found in Vassar College archives by John F. Mariani in writing the “Dictionary of American Food and Drink”.

“Nearly every night at college,” said the Vassar girl, “some girl may be found somewhere who is making ‘fudges’ or giving a fudge party,” says a writer in the Boston Globe. “Fudges are Vassar chocolates, and they are simply the most delicious edibles ever manufactured by a set of sweetmeat-loving girls. Their origin is wrapped in mystery. We only know that their receipt is handed down from year to year by old students to new, and that they belong peculiarly to Vassar. “To make them, take two cups of sugar, one cup of milk, a piece of butter one-half the size of an egg, and a teaspoonful of vanilla extract. The mixture is cooked until it begins to get grimy. Then it is taken from the fire, stirred briskly, and turned into buttered tins. Before it hardens it is cut into squares. You may eat the fudge either cold or hot; it is good either way. It never tastes so delicious, however, as when made at college, over a spluttering gas lamp, in the seclusion of your own apartments. The various difficulties that this method entails but make the fudge taste sweeter.” — “FUDGES” OF VASSAR COLLEGE: How the Sweet Girl Undergraduate Spoils Her Digestion. Warren, Pennsylvania: The Evening Democrat. Tuesday, 30 April 1895. Page 4.

“The last snow has hardened into a crust, slippery and tempting, just the thing for coasting, and every evening, the back campus is merry with coasting parties, The five and ten-cent store has been raided for little pig stickers [sic], small boys have been bribed into lending their clippers and even fudge pans are found of service.” — SMITH COLLEGE GIRLS: Sliding on Fudge Pans and Bicycling on Snow. Fitchburg, Massachusetts: Fitchburg Sentinel. Monday, 7 March 1898. Page 3.

“While fudge is distinctly a fin-de-siecle evolution, primarily associated with college girls and surreptitious social functions, every one likes it, and you may be sure that your masculine contingent tomorrow will take to it most kindly. This is the Vassar recipe: Cream together two cupfuls of sugar and one tablespoonful of butter; add a scant half cupful of milk, and put over the fire until it comes to a boil. Stir in two squares of chocolate or two teaspoonfuls of cocoa and a teaspoonful of vanilla. Boil until it hardens when dropped in cold water; then take from the fire and stir until stiff. Pour in buttered pans until cold; then cut in squares.” — HOME-MADE CANDY, Sweets That Can Be Made With Little Trouble: Fudge. Sandusky, Ohio: The Star. Tuesday, 6 December 1898. Page 4.

“She sits on the couch in preference to any sort of comfortable chair, and she delights in “fudge” more than in the most delicious of bonbons. She is far from the world, and she never talks as women elsewhere do. She seldom mentions shopping…” — The College Girl: The Gentle Pioneer Who Was Viewed With Alarm. Fort Wayne, Indiana: The Fort Wayne News. Thursday, 8 February 1900. Page 6.

“Another college dormitory favorite is called white fudge. It is made with two cups of the so-called brown sugar of commerce, which is nowadays very light in color, and a cupful of thick cream. Boil together till it hardens in water. Have a pan or platter spread with whatever kind of nut meats is desired. Remove the blazer from the flame and stir the candy until it begins to stiffen slightly, then pour over quickly, taking care to keep the nuts on the lower side. The result when the candy is cooled and cut into squares is a tempting mouthful with a thick upper layer of nuts.” — COLLEGE GIRLS’ FEASTS: Popular Dishes at Vassar and Bryn Mawr for Luncheons. Anaconda, Montana: The Anacona Standard. Friday, 9 November 1900. Morning edition. Page 8.