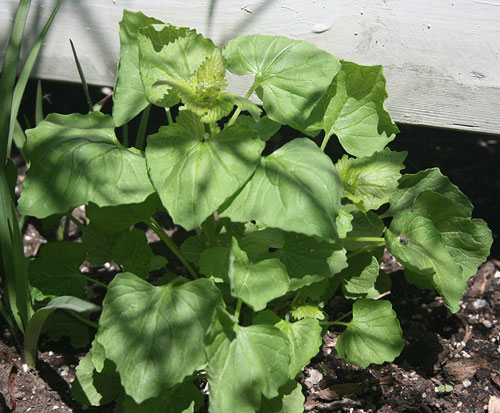 Garlic Mustard, a member of the mustard family, is a biennial herb that grows easily from seed, or by root, in the wild.

The leaves smell faintly like garlic; thus its name. They have a very mild garlic flavour that some describe as mixed with mustard; others say mixed with cress. Crushing the leaves gives off a garlic smell that adheres to your hands. Depending on the locale and weather conditions, the garlic and mustard taste can be quite hot.

In its first year, it produces a base of leaves that are triangular or heart-shaped, with toothy edges. Over that first winter, it will stay green and hold its leaves, often even when the winter is harsh. As hungry as deer might get, though, they don’t seem to really like the plant and leave it alone.

In the plant’s second and final year, it grows up to 1 metre (3 feet) tall, and produces clusters of small white flowers with four petals each in a cross formation. The leaves begin to drop as soon as the flowers appear. After the flowers, the plant produces seeds in slender, shiny four-sided black pods that turn pale brown as they age. By mid-summer, the plant has begun to die back.

Both the leaves and roots can be used. The leaves are good in the early spring, then good again throughout the fall and winter into spring. Leaves that are triangular will be really good in the spring, with more of a garlic taste and a touch of sweetness. They are not worth eating in hot, dry weather or in the summer, as they turn bitter. The taste is always very mild in winter. The leaves can be eaten raw, finely chopped, in salads, or used as a potherb, or as a flavouring herb in sauces.

The plant is considered a noxious, invasive weed in North America and not generally used as a food item there.

It can be used as an accent herb in salads. You can also treat it as a pot herb. It can be steamed, sautéed or added to soups and stews at the end of cooking. Cook 5 minutes at the most, or the leaves will lose their taste.

When gathering garlic mustard in the wild, there is a risk of confusing it with toothworts, sweet Cicely, and early saxifrage. Be sure that it has not been sprayed with weed sprays.

Garlic Cress is native to Europe. It was probably brought over to North America by colonists for use as a pot herb, or for folk medicinal purposes, and has thrived since as a garden escapee. The first written record of it in North America is in Long Island, New York, in 1868.