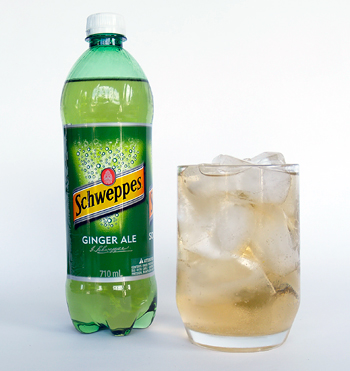 Ginger Ale is a soft drink version of ginger beer.

It is a carbonated beverage, flavoured with ginger extract (artificial or genuine.) Commercial brands are often coloured with caramel.

Dry ginger ales, such as Schweppes, are better to use as a drink mix than sweeter versions.

A glass of ginger ale with a scoop of vanilla ice cream in it is called a “Boston Cooler.”

Some people swear by ginger ale as a marinade.

People with the flu are often given ginger ale to soothe their stomachs.

Real ginger can soothe stomachs, but most ginger ales now use artificial ginger flavouring, and the ones that still use real ginger don’t contain enough ginger to actually make any difference.

In fact, if the invalid also has diarrhea, the sugar in the ginger ale may make it worse.

The first ginger ales were made in Ireland in 1851 as cloudy drinks. Pub owners would put out small containers of ground ginger for patrons to sprinkle onto their beer.

The first company in America to bottle ginger ale was DOWS of Boston, Massachusetts, in 1861.

Clicquot Club Ginger Ale was started by Henry Millis sometime in the 1880s in Millis, Massachusetts. He named it after the famous French champagne. [4]

Canada Dry was invented by a pharmacist, John McLaughlin (1865 – 1914.) [5] His father was a financially successful carriage maker in Upper Canada. In 1890, he started making soda water in Toronto and selling it to drug stores. In 1904, he started making a dark ginger ale called “McLaughlin Belfast Style Ginger Ale.” Sometime between 1904 and 1907, he was in France. There he got the idea of making a lighter-coloured ginger ale that would “feel” like champagne. In 1907, back in Canada, he modified his ginger ale recipe to make it lighter in colour, and to taste less gingery. He bottled it with a map of Canada on the label. He patented it as Canada Dry Pale Dry Ginger Ale. Upon his death in 1914, his two brothers Sam [6] and George took over the company. They began shipping to America in 1919; in 1921, they opened a plant in Manhattan. They trademarked the name Canada Dry Pale Dry Ginger Ale in 1922. In 1923, the brothers sold the business to P. D. Saylor and Associates, an American company. The first place Canada Dry was made outside of North America was Peru, in 1936, under licence.

Since 1986, Canada Dry has been owned by Cadbury Schweppes. Canada Dry did try a less-sweet variety of Ginger Ale called Canada Dry Extra, closer in taste to Schweppes, but it was not long on the market.

During Prohibition in America, the USS Colorado was launched at Camden, New Jersey with a bottle of ginger ale across its bow.

Some bottlers used hot red pepper to generate the zip, because it was cheaper than ginger.

One of the smallest brewers of ginger ale in America is Blenheim Bottlers, in business since 1903. They make a version of ginger ale that is very gingery, which they call “hot,” and only bottle in glass. It is located in Hamer, South Carolina.

[1] Cantrell & Cochrane’s Ginger Ale continued to be sold in America as late as the 1950s in cans whose tops were shaped like cones. Cantrell & Cochrane are still in business as of 2008, headquartered in Cranford, New Jersey, owned and managed by Kelco Sales & Marketing. They still make ginger ale.

[3] Vernor’s appears to have stopped its concentrated syrup in oak casks in the 1980s. Fans say it has never tasted the same since. Since 1993, Vernor’s has been owned by Cadbury.

[5] John James McLaughlin preferred to be called Jack. His parents were Robert McLaughlin and Mary Smith. He was born in Tyrone, Ontario. He graduated in pharmacy from the University of Toronto in 1885. In 1890, he married a Maude M. Christie. He called his company “The J. J. McLaughlin Company Limited, Manufacturers of Hygeia Beverages.” In Toronto, he lived at 81 Glen Road. The couple had a daughter, Maud. He died on 28 January 1914.

Hygeia was the Greek goddess of health, cleanliness and sanitation.

This web site generates income from affiliated links and ads at no cost to you to fund continued research · Information on this site is Copyright © 2022· Feel free to cite correctly, but copying whole pages for your website is content theft and will be DCMA'd.
Tagged With: Canadian Food, Ginger