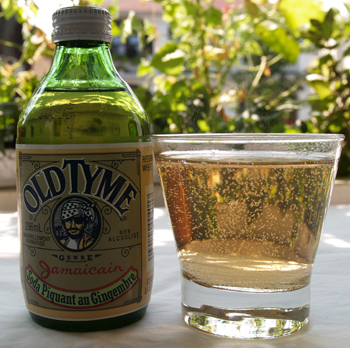 Ginger Beer is a beverage made from ginger, yeast, a sugar (honey, molasses or sugar), and lemon juice.

All homemade Ginger Beer will be alcoholic. Home made batches need anywhere from 1 to 2 weeks in the bottles before being ready to drink. During this time, the drink carbonates itself naturally in the bottles.

Most commercially-made Ginger Beer is now based on a flavoured syrup, and carbonated artificially.

Better Ginger Beers will be a bit cloudy, from added botanicals to round out the flavour; there may even be some yeast sediment at the bottom of the bottle.

Ginger Ale was designed as a clear, milder version of Ginger Beer.

Ginger Beer is popular in the Caribbean.

Ginger Beer first appeared in England in the mid to late 1700s, and in North America around 1790. Ginger Beer was first made commercially in Australia in 1820.

In North America, commercially sold Ginger Beer was imported first from England in bottles. It needed good bottling to keep the fizz in. It wasn’t the first popular drink to include ginger — that was Metheglin.

In North America, Ginger Beer started to be produced on a large scale commercially after the American Civil War. It was particularly popular in New York State. Many Ginger Beer breweries sprung up along the Erie Canal, which offered easy transport.

In the US, the production was hit by prohibition. It was always more popular, though, in the UK and in Canada.

Left to its own devices, Ginger Beer would end up with around 11% alcohol. In England, the Excise Act of 1855 defined taxable alcohol as anything over 2%. To avoid the tax, Ginger Beer manufacturers had to dilute it with water.

Ginger Beer continued to be sold in stoneware bottles, even when glass became very fashionable, because it was cloudy. It was sold in stoneware until 1940 in the UK and Canada. Eventually, glass did win out. Returned bottles could be inspected better, assembly line machines were being designed for glass, plus, the cost of the stoneware had got too high.

This web site generates income from affiliated links and ads at no cost to you to fund continued research · Information on this site is Copyright © 2022· Feel free to cite correctly, but copying whole pages for your website is content theft and will be DCMA'd.
Tagged With: Carbonated Beverages, Soft Drinks