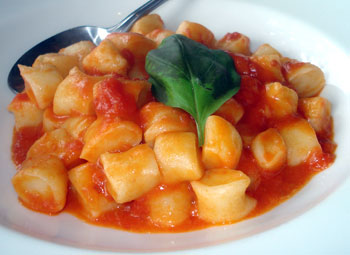 Gnocchi are small, Italian dumplings made from flour, salt, and egg.

The dumplings are simmered briefly in water, and then served with a sauce.

They are similar to what the Ukrainians call “Lazy Varenkiki.”

Gnocchi are expensive to buy at supermarkets, compared to how cheap they are to make. But they are very fiddly to form by hand. Try piping out ½ inch (1 cm) thick strips from a piping bag, which you then cut up into pieces.

When Gnocchi hit the hot water, the flour on the surface of the Gnocchi almost instantly forms a seal around the Gnocchi, to keep the water from penetrating right through. But don’t ever let them boil, as the raucous motion of the water will break this seal. Keep water simmering.

There is an Italian expression, “giovedi gnocchi”, which we’d say in English as “gnocchi on Thursday.” It was the day on which people in many parts of Italy traditionally made gnocchi, particularly in Rome and Naples. Many restaurant menus in Italy still only offer gnocchi on Thursday.

It’s a tradition that’s falling by the wayside, though, if only because now that you can get them ready-made at the stores, it’s easy to have them more often that that.

This web site generates income from affiliated links and ads at no cost to you to fund continued research · Information on this site is Copyright © 2022· Feel free to cite correctly, but copying whole pages for your website is content theft and will be DCMA'd.
Tagged With: Gnocchi