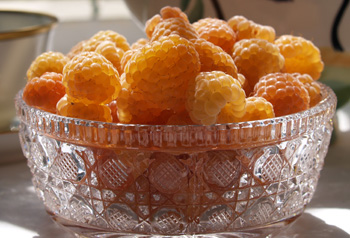 Gold Raspberries
© Denzil Green
Contents hide
Golden raspberries are not just unripe red raspberries. They are raspberries that actually ripen to be gold.

The gold colour can range from pale yellow to deep gold.

There are several cultivars, including one popular one called “Fall Gold” that originated in Korea. The seeds in it are somewhat larger and more numerous than in red raspberries.

When making jam from them, not that the jam won’t stay that amber colour. You either need to add lemon juice (aka ascorbic acid, which may disrupt the pectin set) or add a few red raspberries to make a light pink jam.