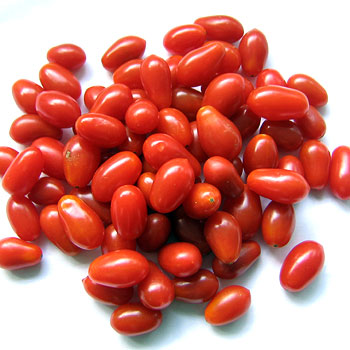 Grape Tomatoes look a lot like Cherry Tomatoes, except they are elongated, making them actually more grape or olive shaped than cherry shaped.

They will be 1/2 inch to 3/4 inch wide (1.25 to 2 cm.) The vines they grow on need to be staked because they can grow up to 7 feet tall (2 metres.) Harvesting Grape Tomatoes is very labour intensive: they have to be hand picked because they are so small.

Grape Tomatoes are a hybrid from Taiwan. They were first grown in North America in Manatee County, Florida in 1996. They were already very popular in Taiwan and mainland China at the time. By 2001, they were outselling cherry tomatoes 10 to 1 where available in America. One grower in the US has bought up most of the rights in the US to the variety called Santa, which is the original variety. The search is now underway to develop and test new varieties that other growers can use, and institutes such as Purdue University are on the case. The question now (2004) is whether they will displace Cherry Tomatoes altogether in the market.

Called “Grape Tomatoes” just because of their shape.

Sugarman, Carole. “Attack of the Grape Tomatoes: How a Tiny Fruit Took Over the Produce Aisles”. Washington Post. 12 September 2001.

This web site generates income from affiliated links and ads at no cost to you to fund continued research · Information on this site is Copyright © 2022· Feel free to cite correctly, but copying whole pages for your website is content theft and will be DCMA'd.
Tagged With: Cherry Tomatoes