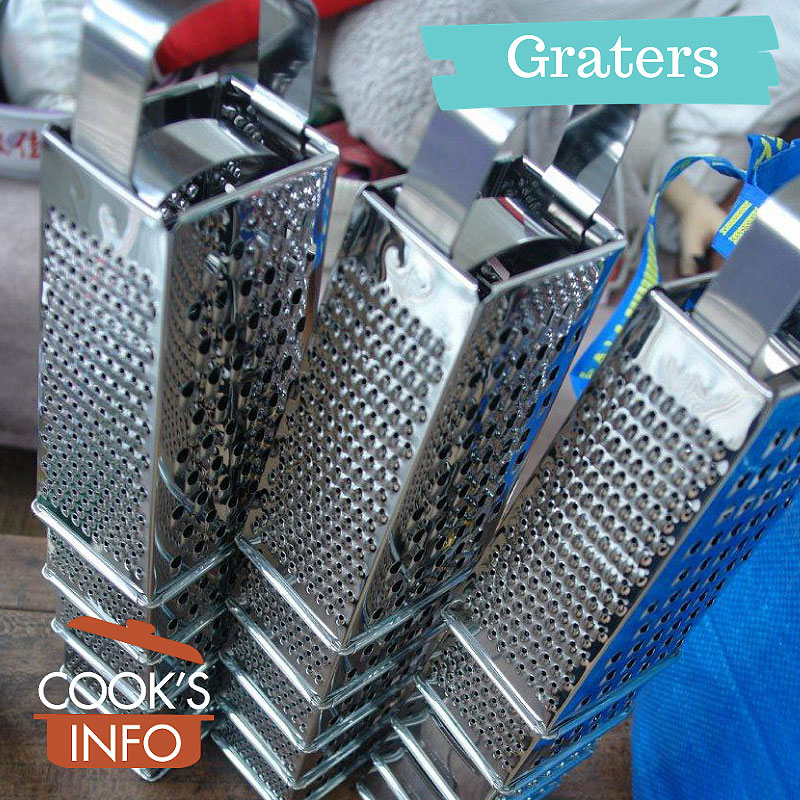 A grater is a surface with sharp, raised teeth on it.

The grating surface can be made of metal or plastic.

With most, you press food against the grate and drag it back and forth, to cut the food into very fine pieces. Food put through a grater is referred to both as “grated” or “shredded.”

Some graters are hand-helds, some are crank type ones. Some graters are just flat or slightly-round one-sided surfaces with a handle on one end; others are stand-up box-type graters that offer different grades of coarseness on each side.

Box graters allow you to use your arm and downward momentum to lessen the work, but a lot of the food tends to get stuck in the teeth, and they can be very hard to clean.

You can also use these lying on their side, if you prefer to work with sideways motions. 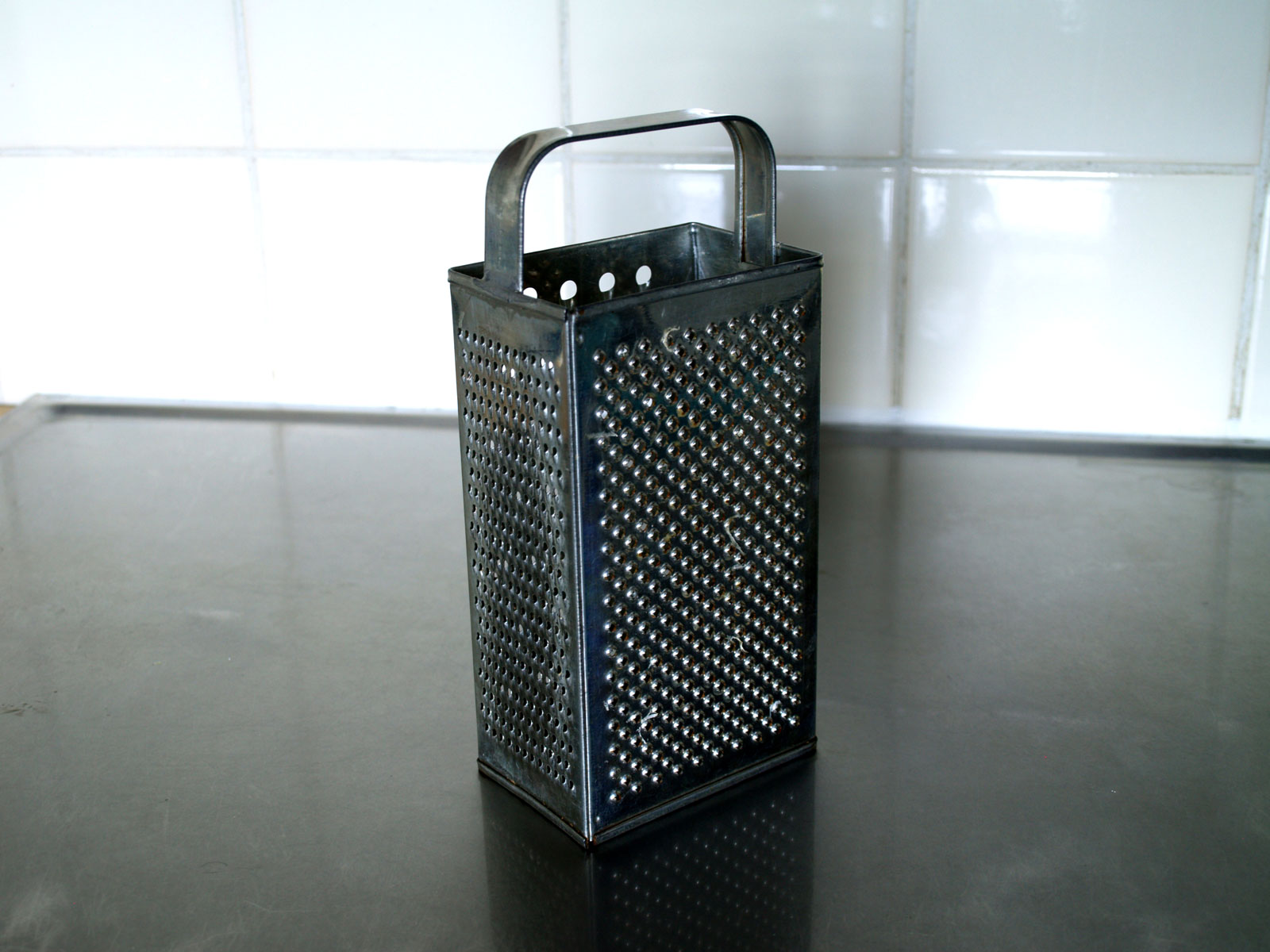 Rotary graters are popular for items such as chocolate and cheese. Older-class models of the rotary graters were devices on three legs, raising the device above the work surface. You put the food in a “bowl” in the grater, pressed down on it with a “lid”, and turned a handle on top, which caused a grating disk underneath the food to turn and grate the food. The food fell out underneath.

Newer-class ones have a drum on a relatively long handle. Above the drum, there’s a square basin that you put food in. You fold the handle down, so that the part of it above the basin starts to press on the food. You hold the handle with one hand, pressing harder as needed to force the food further down, and while doing that, there’s another handle that you turn that spins the drum. The drum is the grater. The grated food falls out to one side. Many come with interchangeable drums for different grating sizes. 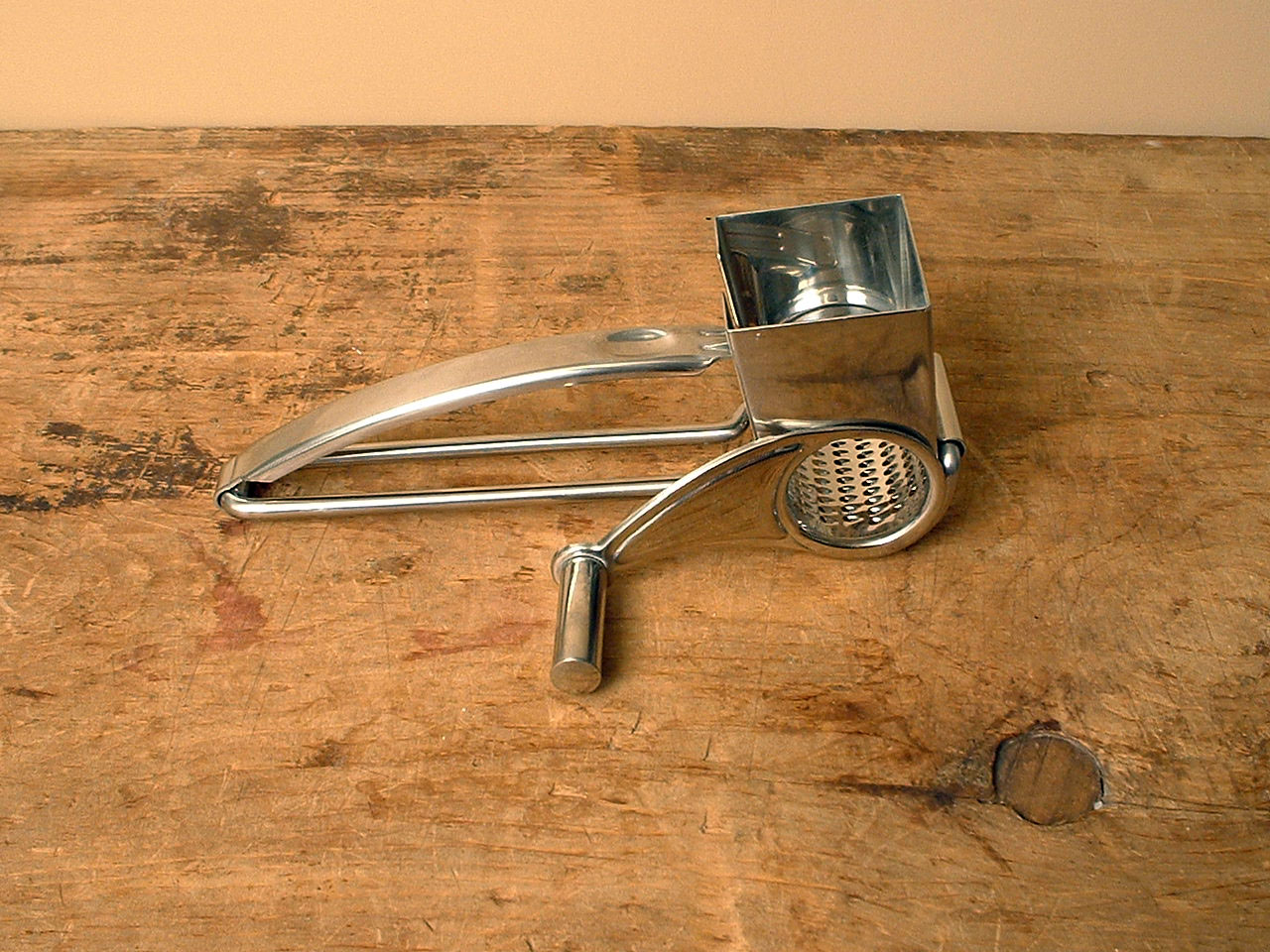 To use the flat hand-held graters, slope them over either a plate, clean work surface or cutting board, and grate while you hold the grater at an angle.

They can be a bit tricker to use at times, because you are trying to hold the grater up while also essentially pushing it down. 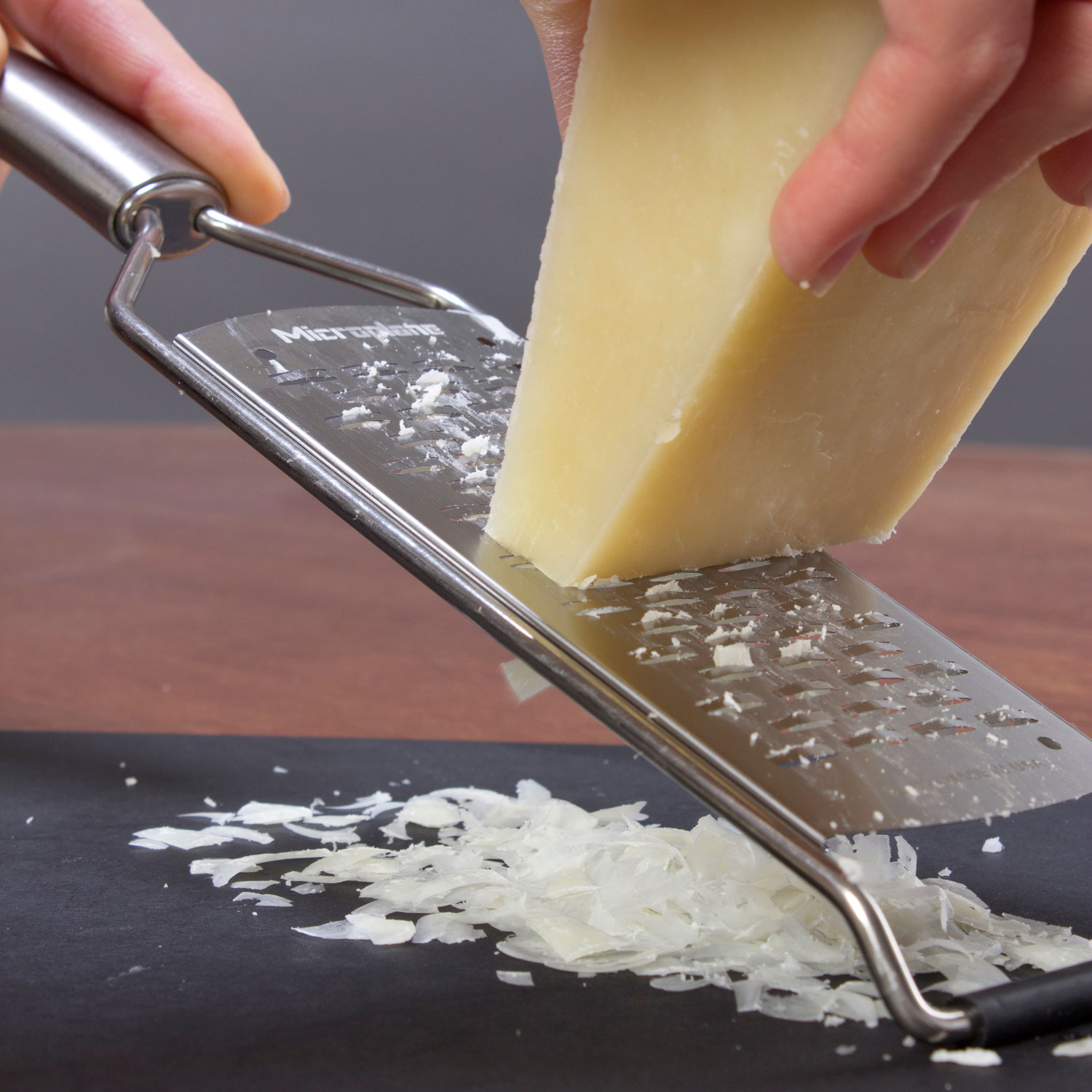 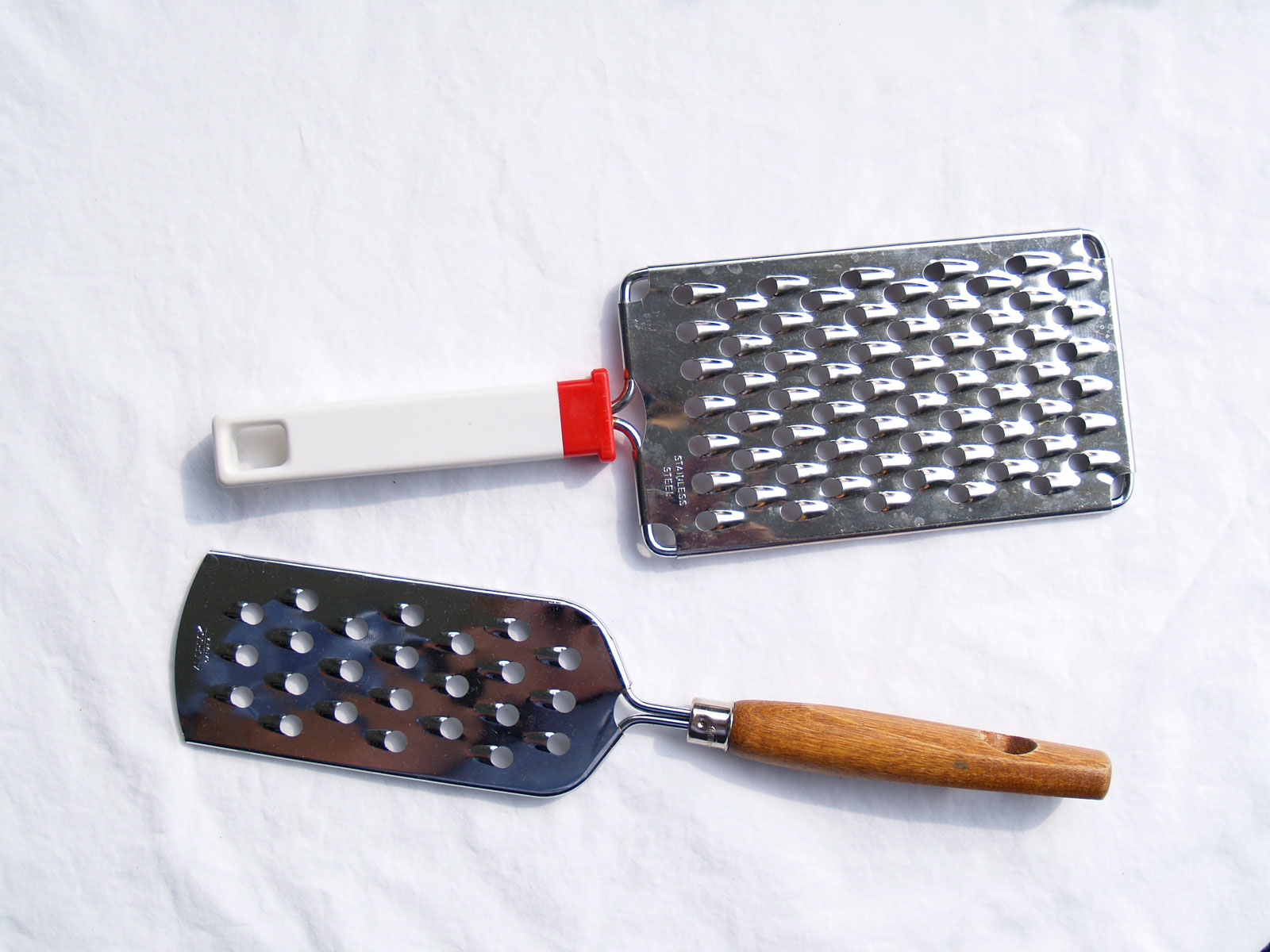 It can be very tedious to grate a large amount of something with any hand-operated type of grater. Many people will just automatically reach for a food processor or electric food mill instead.

Some say that electric graters of any kind aren’t worth the trouble, given the amount of clean-up involved, and the storage space required. When pressed, however, they are usually willing to admit that they can be useful for those with arthritic hands, or for when you need to grate enough cheese to feed a mob. Those who are fans of electrical methods of grating say that provided you have something whose bits can all go in the dishwasher, it’s not a lot of bother, and speeds up one of the more boring and thankless tasks in the kitchen — when’s the last time anyone ever commented on the quality of the grating?

Some people can’t bring themselves to buy the bags of already-grated cheese in the supermarkets. Besides the costs, they think it’s just a step too far in the direction of laziness, and they question the quality of the cheese used. Still, when you have to churn out a lot of dishes in a hurry to feed a crowd, who can resist the allure of having shredded cheese ready to use?

Rinse graters right after using them, even if you don’t have time to fully clean them on the spot. If food dries on them, they are much harder to clean.

The archaeological record appears to show that we have been using graters for at least 3000 years. Emma Kay, writing in Vintage Kitchenalia, notes:

“Although archaeological finds determine that the Greeks were probably using bronze graters circa 1194 BC, like so many of our modern-day appliances, it was undoubtedly the Romans that introduced Britain to the cheese grater. Bronze and silver cheese graters have been unearthed in the tombs of the Roman elite, suggesting that hard cheese was a luxury item and a grater was an essential utensil for the aristocratic Roman.” [1]Kay, Emma. Vintage Kitchenalia. Gloucestershire, England: Amberley Publishing. 2017. Google Ebook edition.

Tin graters date back to the early 1800s. 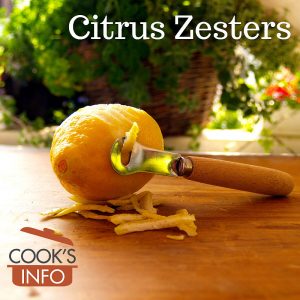 A citrus zester is a kitchen tool used to produce very fine, almost thread-like strips of citrus zest for use as an ingredient, and as a garnish for dishes and beverages. 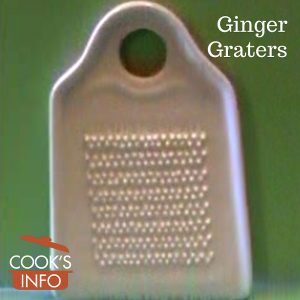 Ginger graters are made from ceramic or porcelain, or less commonly, carved from bamboo. The teeth on them is quite different from that on other graters: it's because ginger is so fibrous and so hard to grate. 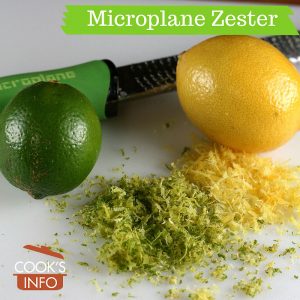 Microplane® is the brandname of citrus zester which looks somewhat like a long wood rasp. It produces fluffy shreds of citrus zest very fast. 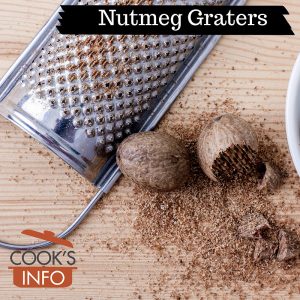 Nutmeg graters started out as prestige items made of precious metals carried about by the wealthy as status items. It's only relatively recently in history that lowly cooks got nutmeg graters for use in a kitchen.

This web site generates income from affiliated links and ads at no cost to you to fund continued research · Information on this site is Copyright © 2023· Feel free to cite correctly, but copying whole pages for your website is content theft and will be DCMA'd.
Tagged With: Graters, Mills