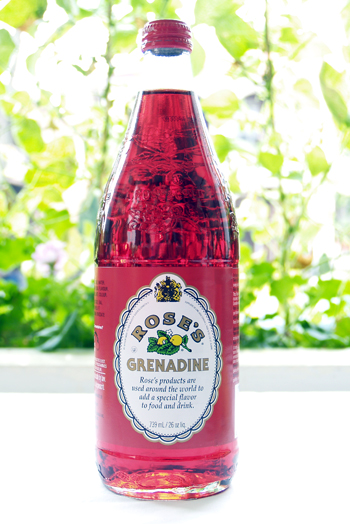 Grenadine is a non-alcoholic syrup that is used to flavour and sweeten drinks and desserts. It used to be made from pomegranates, or a mix of pomegranates and red currants. Today it is usually made with other, mixed fruit juices, and artificially flavoured and coloured.

Red Grenadine is the most popular fruit syrup. It is used in many cocktails, and even used in children’s bar drinks, such as Shirley Temples. You just use one or two dashes in mixed drinks, as the sweetness can easily overwhelm a drink.

You can buy Grenadine in bottles at most stores.

Green Grenadine is coloured green, but tastes the same as Red Grenadine.

You can make your own Red Grenadine, but given that the cost of pomegranates is way more than a bottle of grenadine, it’s difficult to know why you would.

For Green Grenadine, you can substitute crème de menthe, though of course that will add a mint taste in addition to the green colour.

The name “Grenadine” comes from the French word for a pomegranate, “grenade.”

This web site generates income from affiliated links and ads at no cost to you to fund continued research · Information on this site is Copyright © 2022· Feel free to cite correctly, but copying whole pages for your website is content theft and will be DCMA'd.
Tagged With: Fruit Syrups