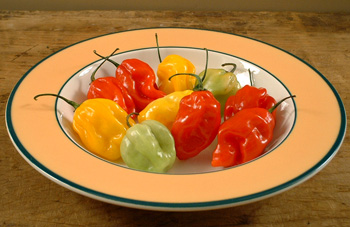 Habanero are beautiful, small, lantern-shaped chiles about the size of a golf ball, though not quite succeeding at being as round, because they are quite wrinkled.

They can be green, yellow, orange or red. They have the most flavour — not to mention heat — when they have fully ripened to red.

When dried, they are brown.

Habaneros are pretty much the hottest chile peppers going. Some scientists in India claim the “Naga Jolokia” is hotter, but their lab tests (done in 2000) haven’t really been accepted or confirmed yet. So for now at least, Habanero remains the reigning princess of pain and pleasure. 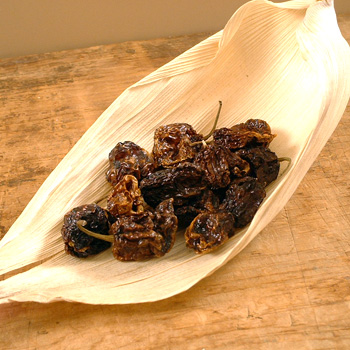 Habaneros are perhaps the one type of chile that it’s not overdramatic to use gloves with when handling.

Depending on your genetic make-up, you may even feel it burning your skin, never mind your eyes.

Cutting boards should be cleaned afterward. If you do touch with your hands, scrub your hands well several times with soap and water to get the oils off.

If your hands burn from the contact, try applying a vegetable oil. If it’s in your eyes, you will have strong pain. Flush with water immediately and a lot.

Habanero means “from Havana”. Many people, in a laudable attempt to get the Spanish right, will spell it “Habañero”. That’s wrong — there is no squiggly over top its “n” — but it does look more festive like that.

This web site generates income from affiliated links and ads at no cost to you to fund continued research · Information on this site is Copyright © 2022· Feel free to cite correctly, but copying whole pages for your website is content theft and will be DCMA'd.
Tagged With: Chile Peppers