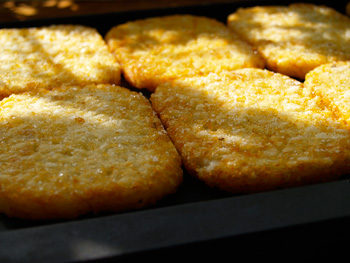 Contents hide
Hash Browns is a potato dish made from shredded potato. It results in a brown, crispy potato dish that is used as a side dish, served piping hot, often at breakfast.

At home, large ones are made in a frying pan, that are then cut up for serving. Or, they can be formed into patties and fried. Hash Browns are sold in frozen (usually rectangular patty) form in supermarkets, ready to fry up. These will be diced potato, seasoned and moulded together. These are what you will usually get in fast-food places and diners.

The mixture is a simple one. There is no binding such as egg or whatever added, just the starch and the moisture from the potato holds it together. The seasoning is just salt and pepper.

The dish works best if you use a floury potato so it will stay together. The potato can be peeled or unpeeled.

Putting the raw potato through a potato ricer can result in a crispier texture, as more moisture gets removed. If you are shredding the potato in the food processor, make sure you use the shredding disc.

As you are grating the potato, put the grated stuff into a bowl of very cold water. Don’t leave the shredded potato sitting out too long exposed to the air, as many potatoes will go grey on you.

After grating or shredding the raw potato, let it sit in the cold water for 20 minutes — this removes excess starch. Then pat dry with paper towel or even better, put the shredded potato between a layer of paper towels and press out with a rolling pin. Some people dry the shredded by spinning them in a salad spinner, because then you can get them really dry. Others say, this results in way too much cleanup work. However you do it, you want to get excess moisture out. If the potato is too moist, your Hash Browns will steam rather than fry.

Hash Browns are best fried up with oil, not butter, as butter will burn. Use just enough oil to cover the bottom of the frying pan well.

Have the frying pan at medium-high heat, because when you put the potatoes in, the temperature will drop down to medium. If you started at medium, it would drop down to low, and you won’t get the browning and crisping.

If you are making one large one, you can start the pan with a few tablespoons of chopped onion or green onion sautéed for a couple of minutes before the potato goes in the pan.

Don’t make the patty too thick, or the middle won’t cook. Press patties down to flatten them in the pan.

Don’t cover while cooking or it won’t crisp.

After 6 to 8 minutes, check the bottom of the patty. It should be crispy brown. If not, wait until it is. Whether large or small, the patties should be flipped only once, after about 6 to 8 minutes, depending on the heat setting.

The flip, and cook for another 6 to 8 minutes.

If you are making one large one, you can do the dinner-plate trick to flip it. Invert it onto a large flat dinner plate; heat up a bit more oil in the pan, then slide the uncooked side down back into the pan.

If you’ve done something wrong and they are right on the outside, but still a bit wrong in the middle, nuke ’em for a few minutes in the microwave.

Hash Browns used to be referred to as “hashed brown potatoes”, but by 1970s the name had just through common use been shortened down to “hash browns.”

This web site generates income from affiliated links and ads at no cost to you to fund continued research · Information on this site is Copyright © 2023· Feel free to cite correctly, but copying whole pages for your website is content theft and will be DCMA'd.
Tagged With: Breakfast, Potatoes