Hot Water Crust Pastry is a pastry crust made with hot water.

It is often used for individual serving-size pies, though it can also be used for one large-sized pie. It is usually used with savoury pies.

Hot Water Crust Pastry breaks all the rules of “normal” pie crust, such as keep everything as cold as possible, handle as little as possible, etc.

It is not meant to be a tender, flaky pastry, though it will be crisp and tender. It’s meant to have enough strength for the pie to cook on its own without the support of a pie tin.

You put water and lard in a saucepan, and bring the water to a boil, melting the lard into it. You pour this into a bowl into which you have measured your flour and salt, and stir until it is cool enough to handle safely. Then you form it into a ball, knead it on a board, then roll it out.

To use, you take something as a mould, say a jar or a tin, then form the pastry around it, then remove the mould. You repeat for as many pies as you are planning to make, making sure that you have reserved enough dough to make tops for the pies at the end.

Some recipes use half milk, half water to make a richer crust. Some add an egg yolk to the flour and salt mixture.

Some people prefer to let the dough rest at the ball stage for 20 to 30 minutes before rolling out. Some even put it in the fridge for this resting time. Others advise to finish your work with it all at once, while it’s still warm, because that makes it easier to mould.

This is also called a “Raised Crust”, not because there is any leavener in it, but because you can make raised pies with it. Pies made with this type of crust are also called “Stand Pies.” 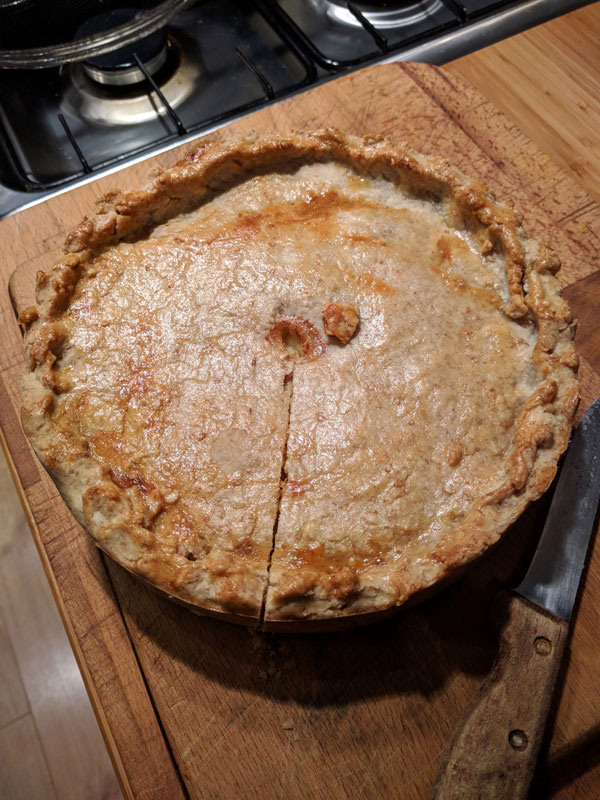