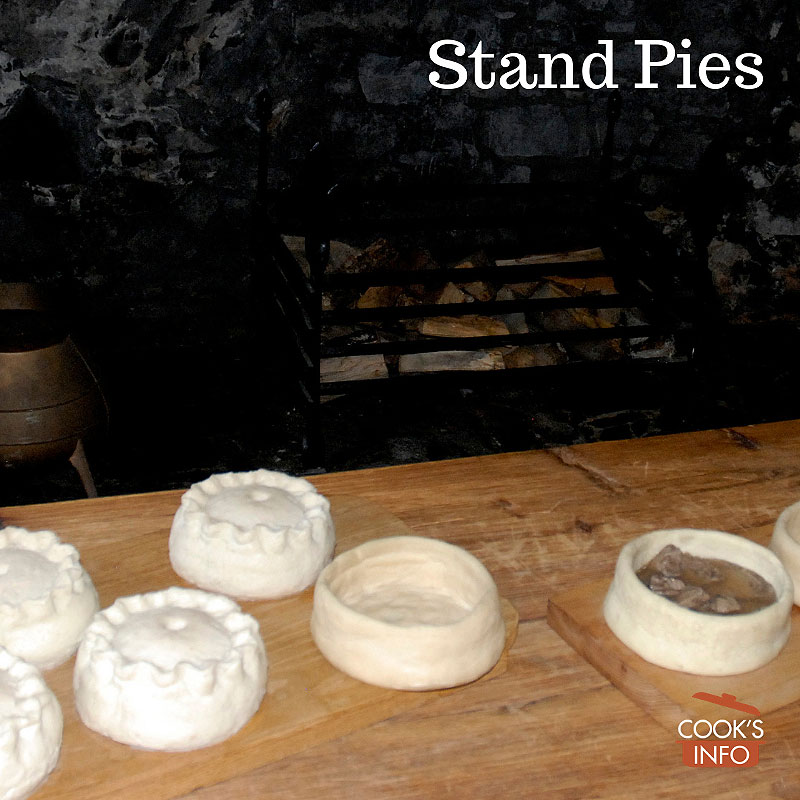 Stand Pies are pies that stand up by themselves without the aid of pie tins, moulds or hoops. Stout, sturdy pies, they are tall compared to today’s standard fruit pie baked in a pie tin, and are nowhere near as wide.

They are made from a hot water crust pastry. The pastry is formed around a wooden mould. The mould is then taken out, leaving a standing pastry crust mould ready to receive its filling, almost always meat.

The filling is put in, then the top put on, its edges sealed, and it’s then washed with an egg wash. The top is often decorative.The pie is baked, then cooled.A few holes are pierced in the top, and an aspic is poured in through the holes. Traditionally, the gelatin for the aspic is obtained from boiling bones.

When you are carrying very fresh ones out of the butcher shops, you may need to keep them level in case the liquid aspic hasn’t completely set yet.

Large ones make a great centrepiece on a sideboard or table.

In America, the phrase is often interpreted to mean flat pies, baked in pie tins, usually fruit, that are sold from farmer’s stands at roadsides or in markets.

Stand pies are a direct hanger-on of the old “coffer” or “coffin” pies, made before pie tins and moulds were invented, when a pie had to be capable of standing up on its own with no support because there literally was no alternative.