Household Milk is a term that was used in Britain during the Second World War for government-issued powdered skim milk. It was actually labelled “Household Milk.”

Rationing of liquid fresh milk had begun in Britain in November 1941.

Distribution of the powdered milk called “Household Milk” began a month later in December. It was powdered skim milk, meant to supplement other fresh milk rations.

It came in canisters of beige cardboard, with darker brown highlights on them. At one point, it also came in blue and white tins. [1]

Household Milk canisters read: “Dried Machine Skimmed Milk. Unfit for babies. This tin contains the equivalent of four pints of skimmed milk. Excellent for children over 2 years in addition to dairy milk or when liquid milk is unobtainable.”

The cost was 9 pence, though you still had to have a ration coupon on top of that in order to qualify to buy it. Each person was entitled to 1 canister of dried Household Milk every four weeks.

In addition to this powdered milk, each person in the household was allowed 3 pints (1800 ml) of fresh milk a week, dropping to 2 pints (1200 ml) during times of greater shortages. The allowance of fresh milk went up to 7 pints (4200 ml) a week for expectant women, children and invalids.

Household Milk was not the same as National Dried Milk; that was dried “full-cream milk” meant for feeding to babies. 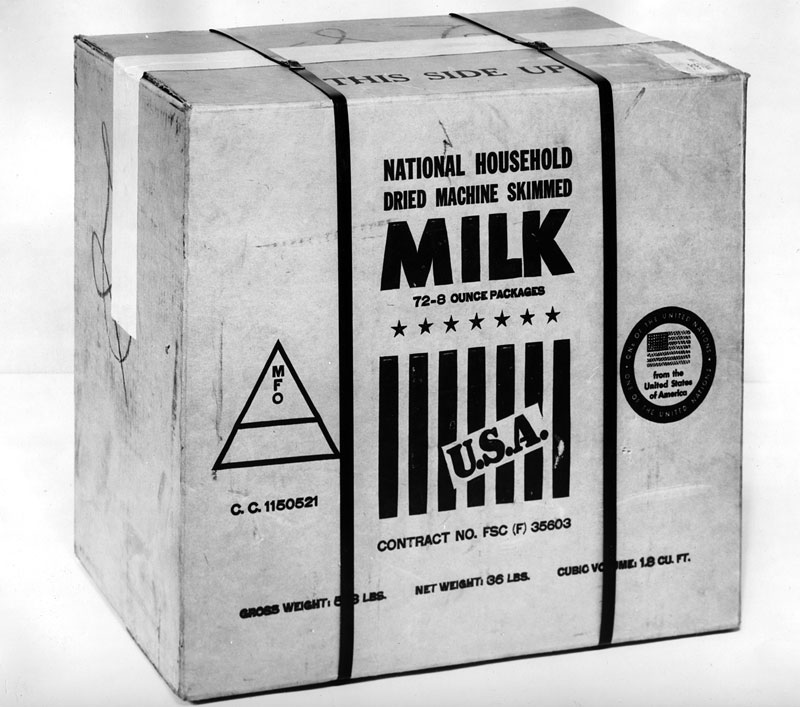 [1] Dark blue metal tin, with a white label area on the front, with blue lettering on the white label. Along one side the tin had the words, “This can is steel — save for salvage.” Source: Museum of London. Tin of dried milk. Accession number: 76.114. Measurements: whole: 112 x 73 mm. Retrieved January 2010 from http://www.museumoflondon.org.uk/English/Collections/OnlineResources/X20L/objects/record.htm?type=object&id=66058

This web site generates income from affiliated links and ads at no cost to you to fund continued research · Information on this site is Copyright © 2023· Feel free to cite correctly, but copying whole pages for your website is content theft and will be DCMA'd.
Tagged With: British Wartime Food