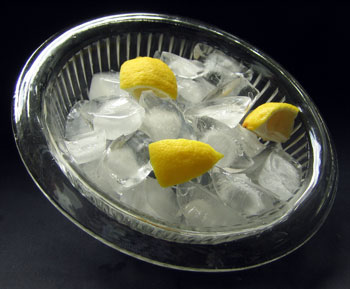 Ice Cubes are a relatively modern convenience that North Americans now take completely for granted. Ice Cube trays first appeared in the “Domestic Electric Refrigerator” invented in America by Fred W. Wolf Jr in 1914. Stand-alone metal ones appeared on the market in America in 1933 (invented by Guy L. Tinkham.)

In Europe, however, Ice Cubes are not so omnipresent. The kind of combo fridge-freezers with large freezer spaces that North Americans have are only just now becoming available. Consequently, Europeans haven’t had the luxury of abundant freezer space to allot for making frozen water. And with small fridges to boot, Europeans weren’t even used to the concept of cold drinks. The refrigerators had to be used instead for chilling items that are a matter of life and death to keep chilled. There wasn’t the space to chill cans or bottles just for the luxury of a chilled drink. Even though large refrigerators are now becoming common sights in appliance stores, the habit at home is still often to just keep bottles of soft drinks and water on the counter, and to drink them room temperature.

In North America, though, serving drinks at the right, chilled temperature does seem to be a matter of life or death for its inhabitants. Ice Cubes have therefore become a very complex topic.

The advantage to smaller Ice Cubes is that you can fit more in a glass, so there’s more surface volume, so they cool things down more quickly. And because they fill up more of the volume of the glass, they leave less room for beverage. This is why they are preferred in fast-food restaurants. The downside is that because they melt more quickly, they also make drinks more watery more quickly. Consequently, some cocktail lushes will ask the bartenders not to refill the ice in their glasses, but rather to re-use the ice from their previous drink.

Some commercial machines even make small Ice Cubes with a hole in the centre, to allow even more surface area for faster cooling. These machines were introduced in America in 1949. 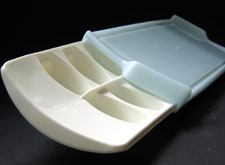 When buying Ice Cube trays, choose ones that are flexible so that you can give them a twist to free the Ice Cubes easily. Ice cube trays should be put through the dishwasher periodically to keep them sterile (don’t do this on the day you’re having people in and will need ice.)

The problem most people have with Ice Cubes in trays is that after a few weeks in the fridge, the Ice Cubes either evaporate away in frost-free freezers, get bits of gunge crumbs on them from other things in the freezer, or start to smell. Ice Cube trays that come with lids, such as those now being made by Oxo Good Grips, may be a solution to these problems for most people.

Opacity in Ice Cubes is caused by the air in the water (actually, dissolved gas in the water.) When the water freezes, it traps the gases creating innumerable small bubbles in the Ice Cubes.

Really clear Ice Cubes are less prone to cracking. Small bubbles in an Ice Cube make its structure more fragile because as the Ice Cube heats up in a drink, the gases trapped in those bubbles expand, creating internal pressure which causes the cubes to crack.

Restaurants are able to produce crystal-clear Ice Cubes owing to the way they make them, in machines where water is constantly flowing, causing the ice to form slowly in thin layers which allows the air to escape.

You’ll probably never be able to produce such perfectly clear Ice Cubes at home, but if you want to try:

Despite all these precautions, you are likely to end up with a somewhat murky centre still. Even ice machines built into the latest and greatest home refrigerators won’t produce clear ice cubes yet — but that may change that as consumer demand for clear ice increases. You can, though, now purchase dedicated clear ice making machines for home use. They are about the size of a bar fridge, so they can be installed under the counter, and cost about $1,300 US (2005 prices.)

If you have time to worry about all this, though, you may wish to also consider making your own water from scratch.

Ice Cube machines built into refrigerators tend to make small cubes. Sometimes people find that cubes from their refrigerator’s ice machine have a funny smell to them. A box of baking soda in the freezer might help, or it might be time to change the water filter on the ice maker. Or, it could be that you don’t use up the ice fast enough, and that it’s picking up odours from other food in the freezer. In which case, turn on the ice maker to make enough to get you through a week or so, then turn it off, use that up, and then when you need more turn it on again. To see if the problem is your water, make a tray of Ice Cubes manually from the same tap water, and see how they taste.

Ice cubes that have been in the freezer for more than 48 hours. Martini purists insist that only aged Ice Cubes should be used in making martinis, as they melt more slowly.

You can buy Imitation Ice Cubes made from acrylic. They range in price from moulded ones from around $10 US to over $20 US for hand-made ones, which will all look different from each other (2004 prices.) They are a little more realistic ones than the ones we all longed after when we were kids, which were the ones from joke stores that had the flies in them. They are made of acrylic rather than glass, as glass ones would actually sink to the bottom of whatever they were put in. You can’t chill these and actually use them to cool drinks with; they won’t hold a chill. They are used by food photographers, because real Ice Cubes melt quickly under the hot photography lights.

You can also buy plastic fake Ice Cubes that have some kind of non-toxic gel inside them — you freeze these and pop them into drinks. They can be used to cool drinks that you don’t wanted to be diluted by a real Ice Cube melting. They come in various shapes said to be “fun”, such as fruit, animals, fish, balls, shells, etc. Some will also light up as well (you freeze these ones in advance, too.) Many of the light-up ones have a limited battery life span inside them of about 12 hours or so; after that you have to toss them out and buy new ones. Though these plastic Ice Cubes can be re-used, the plastic on them doesn’t seem as though it would stand up particularly well to dishwasher washing, which is problematic given that you’d probably want to know that they had been sterilized through a dishwasher run after various people were sucking on them in their drinks. The handwashing route does not seem appealing. Picture hostess on phone with guest calling to thank her — oh, yes, almost finished tidying, I’m just washing the Ice Cubes. Plastic Ice Cubes really don’t chill drinks as well as do real Ice Cubes.

At home, you can make enough ice for drinks for a small dinner party, but if you’re doing major entertainment, you’re best to add a few bags of Ice Cubes to your shopping list. You didn’t used to be able to buy these in the UK, but they started making their appearances in the grocery stores around 2000 / 2001. It’s surprising how long the normally canny UK food stores took to realize they could make money selling frozen water.

If you can’t see the sense of paying money for bags of ice, you can start a few days ahead of time by making trays of Ice Cubes and emptying them into sealable plastic freezer bags, building up a stock for yourself. To store for more than a week, they need to be in a NON frost-free fridge, or as the “frost-free” cycles kick in, the Ice Cubes in the bag will melt a bit, stick to each other and become a solid mass of ice.

Alternatively, you can buy the Ice-Cube bags. They are bags with a small neck opening just at one end, and with many bubbles or cells within them, usually a dozen or two. As you fill the bag up with water, the cells fill up with water. You tie the open end off, put in the freezer and then freeze. To use, you break off as many cubes as you need. They are single-use bags. Not terribly environmental, though, and perhaps not a whole lot more cost-effective than buying a bag of ice in the first place. 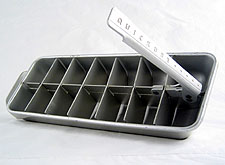 You can make dishes such as gelatin set faster by setting the bowl into bowl of crushed ice and then in the fridge.

You don’t have to make Ice Cubes just out of water — you can make them out of juices, or tea. Most juice will freeze fine, though because of the sugar content they never seem to freeze quite as rock hard as water will.

For Hallowe’en, you can make a scary Ice Cube for a punch bowl by freezing water in a clean plastic glove. When the water has frozen, peel off the glove and your dismembered, Ice Cube hand is ready for your scary punch bowl.

“It’ll be good to be home where the ice water flows like champagne.” — Clementine Paddleford, 1946. Returning home to New York from Paris.

This web site generates income from affiliated links and ads at no cost to you to fund continued research · Information on this site is Copyright © 2023· Feel free to cite correctly, but copying whole pages for your website is content theft and will be DCMA'd.
Tagged With: Ice