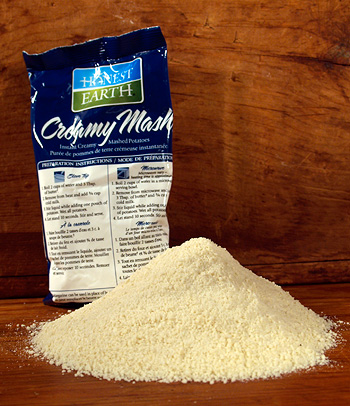 Instant Mashed Potato Granules are often made from potatoes that are too small to be graded, or that are otherwise rejected for other uses such as potato chips (aka crisps in the UK), but are still perfectly good.

To make the granules, the potatoes have their skins steamed off. Then they are cut up, briefly blanched in water, then cooled. They are then boiled to a mash and then mixed with previously dried potatoes, and flash-dried.
Instant Mashed Potato Granules were the original instant mashed potato, being invented in the 1950s, but then were displaced on supermarket shelves by the flake version for the final 3 or 4 decades of the 1900s. After the turn of the 2000s, they began to make a slow comeback, being carried and promoted by store chains such as Costco.

Some people feel that today’s granules make a “truer to life” mashed potato than the flakes do.

The RT French Company (of French’s mustard fame) in Idaho began making Instant Mashed Potato granules in 1952. They introduced the granules commercially in 1955.

Dr Edward Anton Asselbergs (1927 – June 1996) developed a process for making flakes, instead of granules. He was working for Agriculture Canada at the time.

Some archaeologists feel that in fact, the Incas were the first: they crushed Potatoes, dried them into a powder for storage, then would mix with hot water and seasonings to eat.

This web site generates income from affiliated links and ads at no cost to you to fund continued research · Information on this site is Copyright © 2023· Feel free to cite correctly, but copying whole pages for your website is content theft and will be DCMA'd.
Tagged With: American Food, Potatoes