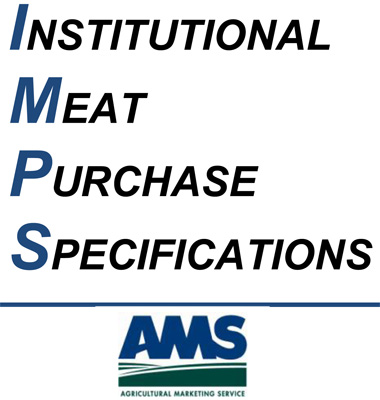 Institutional Meat Purchase Specifications (IMPS) is a set of standard meat specifications maintained by the Agricultural Marketing Service Branch of the USDA (United States Department of Agriculture.) These specifications are valid for North America (Canada and America have harmonized their meat codes.)

The specifications are suggested ones; adherence to them is still (as of 2011) deemed “voluntary.” [1]

Knowing the IMPS code for a particular cut of meat is way overkill for non-professional cooks. Sometimes, though, you may get really frustrated and annoyed by the confusing names that various supermarkets seem to make up out of the blue for cuts of meat. At these times, you can flip to these tables as a last ditch resort to try to see if various cuts are really different or are the same.

Each type of meat is assigned its own range of numbers. These are the ranges:

You can find the tables posted in Adobe Acrobat PDF files at this link:

The specifications are the result of a 1992 decision by the Canadian Meat Council and the American Institutional Meat Purchasing Specifications Council to harmonize their naming systems in order to reduce cross-border and domestic confusion. Each council puts out manuals to be used by producers and retail buyers in their respective jurisdictions.

In December 2011, the American and Canadian governments announced their intention to “Create a common meat cut nomenclature system and regulatory alignment tool to jointly maintain the system.” The benefit stated was “A common approach to naming meat cuts would allow for innovation and product development, and eliminate costs associated with inventory production and maintenance for firms selling into both markets. It would provide consumers with a simple information system to allow them to make price comparisons and cooking decisions across both countries with no impact on food safety.” [2]

It appears that this initiative might be aimed at extending the nomenclature system from the institutional level down to the consumer meat counter level, or developing a new one for the consumer level.

[1] Note that although the specifications are deemed voluntary, the code hints strongly that producers may lose government trade if they don’t follow it, in public sector dealings at least: “IMPS are a series of meat product specifications maintained by AMS. They are developed as voluntary consensus specifications. Large volume purchasers such as Federal, State and Local Government agencies, schools, restaurants, hotels, and other food service users reference the IMPS for procuring meat products.” — Grading, Certification and Verification. USDA Agricultural Marketing Service. 19 March 2010.

This web site generates income from affiliated links and ads at no cost to you to fund continued research · Information on this site is Copyright © 2022· Feel free to cite correctly, but copying whole pages for your website is content theft and will be DCMA'd.
Tagged With: Beef, Beef Cuts, Chicken, Lamb, Pork, Sheep, Veal