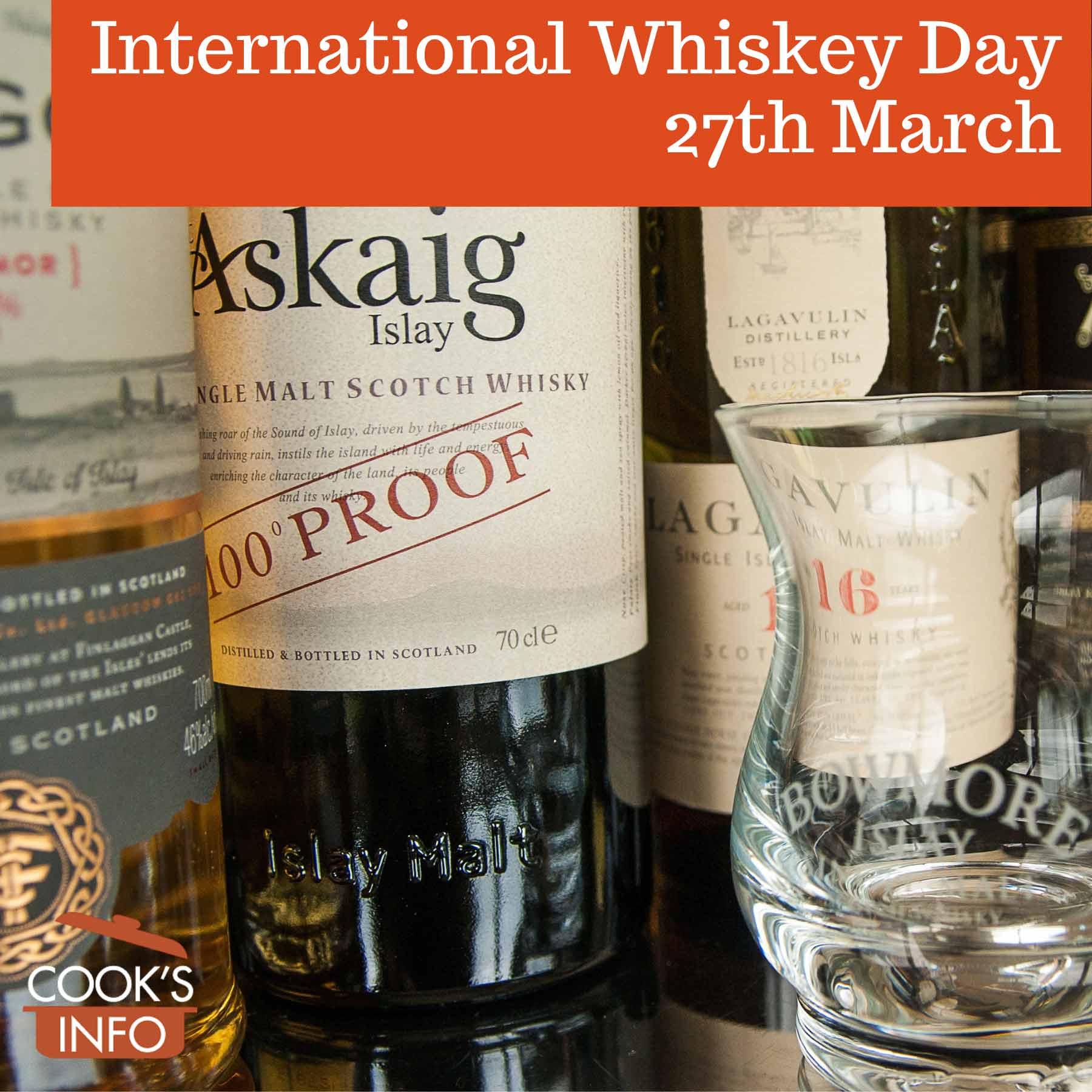 The 27th of March is International Whisk(e)y Day.

There are many different kinds of whisk(e)y in the world. We all agree that we love it. Maybe someday we’ll all agree on how to spell it, too.

Broadly speaking, Irish and American whiskeys have an “e” in the spelling of “whiskey”; Scottish, Canadian, and Japanese whiskies do not (notice the difference in plurals, too.) [1]Whisky vs. Whiskey: What’s the Difference? Accessed March 2021 at https://www.grammarly.com/blog/whisky-vs-whiskey/

Thus, organizers of this hedge their bets by spelling it International Whisk(e)y Day.

Have you ever tried cooking with whiskey?

Today, you could try a type of whiskey you haven’t tried before, or treat yourself to a rarer one than you normally would.

The first International Whiskey Day was held in 2009 in the Netherlands:

“The International Whiskey Day was first declared on March 27, 2008, and then was officially launched at the Whiskey Festival in the northern Netherlands in 2009 in the presence of a number of whiskey writers including Martin Nouet, Helen Arthur, Charles MacLean and others. The initiative was taken to honour legendary British whiskey writer and journalist Michael James Jackson whose birthday falls on the same date. Jackson passed away in 2007 at the age of 65… Whiskey-lovers also make this day an occasion to donate for the treatment of Parkinson’s disease from which Jackson himself suffered for a long time. Awareness campaign against the disease is also initiated on this day so that its spread can be minimised.” [2]Subham. Why International Whiskey Day is celebrated on March 27. Bengaluru, India: One India. 27 March 2018. Accessed February 2021 at https://www.oneindia.com/international/international-whiskey-day-celebrated-on-march27-2666375.html

This web site generates income from affiliated links and ads at no cost to you to fund continued research · Information on this site is Copyright © 2022· Feel free to cite correctly, but copying whole pages for your website is content theft and will be DCMA'd.
Tagged With: Whiskey