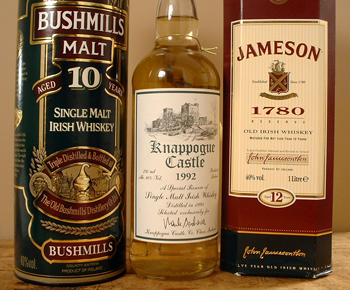 Whiskey is an alcoholic beverage made from fermented grain mash. Grains used can include barley, rye, wheat, and corn. It is distilled, then aged (usually) in wooden casks.

There are entire compendiums, schools and guilds dedicated to each of the varieties of whiskey.

Many barbequing fans swear by whiskey as a meat tenderizer, though you could substitute anything with alcohol in it.

In cooking, you can substitute one whiskey for another ounce for ounce.

The Northern Ireland distillery of Bushmills got their licence to distill in 1608 from King James 1 of England (who was also King James VI of Scotland) — making it the oldest legal distillery in the United Kingdom.

“To a large degree, it is [Robert] Burns’s elevation of whisky to iconic status that makes it ‘Scotland’s national drink’, when other alcoholic spirits and wines were consumed as much as or more than whisky in the eighteenth century.” [1]The University of Glasgow. Robert Burns: Poems, Songs and Legacy. Was Burns a Patriot? Module 1.8. Accessed January 2021 at https://www.futurelearn.com/courses/robert-burns/13/steps/955392

In his poem, ‘The Author’s Earnest Cry and Prayer’ (1786), Burns “complains that Scottish distillers were being unfairly taxed at the behest of London gin producers who didn’t want Scottish whisky flooding their market. Here, then, we have Burns complaining against what he takes to be imbalances in the managing of the British state that were to the detriment of Scotland.” [2]The University of Glasgow. Robert Burns: Poems, Songs and Legacy. Was Burns a Patriot? Module 1.8. Accessed January 2021 at https://www.futurelearn.com/courses/robert-burns/13/steps/955392

As everyone knows, whisky is the Scottish spelling (and drink); whiskey is the Irish. The Irish spelling, however, has won out throughout the world.

“Whisky” was the original spelling. In the late 1800s, American and Irish distillers started to add an “e” to distinguish themselves from Scottish whisky, owing to its poor quality reputation at the time.

This web site generates income from affiliated links and ads at no cost to you to fund continued research · Information on this site is Copyright © 2021· Feel free to cite correctly, but copying whole pages for your website is content theft and will be DCMA'd.
Tagged With: Irish Food, Scottish Food, Spirits