Contents hide
Jaffa Cakes are cookies (or sweet biscuits) that have a firm, spongey base. The base is spread with orange jelly and then topped with chocolate.

They were first made by McVitie’s and launched in 1927. Many supermarkets have their own brands now, as do Marks & Spencers.

Jaffa Cakes are very hard to stop eating. There are fan clubs dedicated to them.

They are not good for dunking in tea, though, because like a piece of cake, they will dissolve. 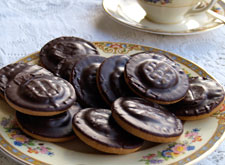 The UK taxman, however, is still smarting at being outfoxed, and apparently is plotting to get legislation passed to get Parliament to declare that Jaffa Cakes are biscuits.

Jaffa Cakes were first made with Jaffa oranges, and thus the name, though now many different types of oranges are used.