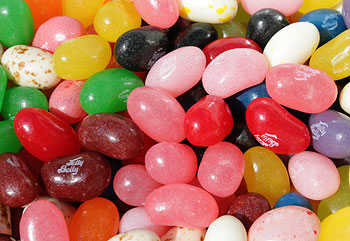 Contents hide
Jelly Beans are a semi-soft, bean-shaped candy, with a firm shell and a soft centre.

The centre of a Jelly Bean is made from a mixture of sugar, corn syrup, lecithin, salt, flavours, and colour, which are boiled together.

A flat tray is prepared by covering it with a thick layer of cornstarch. A machine presses indentations into the starch. These indentations act as moulds. A dab of the centre Jelly Bean mixture is squirted into each indentation. This process of using a layer of starch to form the moulds is called “starch casting.”

When the dabs of mixture have firmed up a bit, the cornstarch is removed (it’s recycled to be used in another round of moulding.) The dabs are steamed, and sprayed with sugar, and let dry 1 to 2 days. Then they are “panned” to create the shell.

Panning involves spinning them around rapidly in a large, tilted, ball-shaped drum with a hole in one end. Sugar and colouring and flavouring syrups are added little by little through the hole. They get coated gradually, building up a shell. When enough coating has built up to form a shell, the Jelly Beans are given a shine by giving them a glaze of powdered sugar, which is then buffed and polished by machines.

The Jelly Beans are let to dry, then passed through a cylinder with mesh at one end. The mesh has different sizes of holes in it. Beans that are too small will fall through the smallest holes and empty into a rejection container. Beans that are the right size will fall through other holes to be packaged and shipped. Ones that get stuck in the mesh will be rejected for being too large.

Jelly Beans may be shipped in mixed colours and flavours, or be kept separate as single flavours.

Since 1976, there are two “categories” of Jelly Beans: traditional and gourmet.

Traditionally, Jelly Beans were fruit flavoured, but now with the new “gourmet” ranges, the sky is the limit.

The “new” gourmet ones are softer and smaller than the traditional Jelly Beans. Both the shell and the middle are flavoured. The centre and the shell may not be the same colour. For instance, a watermelon flavoured Jelly Bean may have a red centre, and a green shell, to mimic the appearance of watermelon. Gourmet flavours go in and out of fashion quickly. At one point, you could even, if you wanted to, get a roasted garlic flavoured Jelly Bean.

Traditionally Jelly Beans are black, brown, green, orange, pink, purple, red, white and yellow. The shell and centre will be the same colour. They are larger and harder than gourmet ones, and only the shell is flavoured.

Jelly Beans are a traditional candy at Easter in the West (speculation rages as to why.) They have a good long shelf life.

Jelly Beans used to be just sold all together in bags or loose as a commodity candy, but then retailers discovered higher sales by separating colours and flavours and selling them in separate bins to make the purchasing process more of an event.

Jelly Beans are sometimes advertised as a “fat free” (though not calorie free) candy.

Some gourmet Jelly Beans aim to be “healthy”, by having ginseng in them, or vitamins such as Vitamin C, or electrolytes to help people in their exercise routines.

Food writers speculate that the centres of Jelly Beans may have been inspired by Turkish delight, and the shells by French glazed almonds. This may, however, be a case of TTH (trying too hard.)

The centres may have started out as actual fruit jelly.

Jelly Beans are an American invention that seem to have appeared in the last two decades of the 1800s.

In December 1886, they were advertised in the Decatur Daily Republican by Peter Ullrich of 144 East Main Street, Decatur, Illinois, in no less than 9 issues of the paper the month leading up to Christmas: “Christmas Candies… Cream Pears, Cream Mice, Cream Babies, Jelly Beans and many other varieties [of candy].”

They regained popularity in the 1980s. The surge of interest at the time was attributed to American President Ronald Reagan, who was fond of them.

Jack Treynor was a professor of Finance at the University of Southern California and the editor of the “Financial Analysts Journal.” He did a jelly-beans-in-the-jar experiment.

He put 850 Jean Beans in a jar, and got 56 students to guess how many there were. The average estimate of the group was 871, and that was closer than any single individual guess, except for 1 person .

There was also a second part to the experiment, which isn’t always mentioned. When the people in the group had heard the first estimates, they were invited to make a second one, but still without being told the correct answer. The second guesses were worse. The first answer was always better. [Jack Treynor, “Market Efficiency and the Bean Jar Experiment,” Financial Analysts Journal 43 (1987): 50-53]