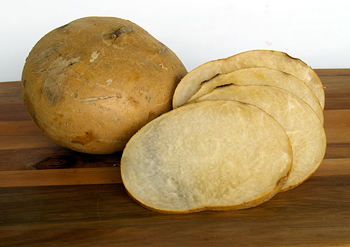 Jicama is a root vegetable. The flesh inside is crunchy, white and a bit sweet.

There are several species which different slightly from each other.

One of the more prevalent varieties sold in America, Pachyrrizus erosus, has two subtypes: one with watery, transparent juice (agua) and one with a cloudy, milky juice (leche.) The leche type has a longer tuber, the agua type is more onion shaped.

The light brown or tan coloured skin will have blotches on it, which shouldn’t be confused with actual blemishes. The skin is fibrous, so it must be peeled away completely, including any layer of fibre under the skin. Young ones will have a thin skin, and bruise more easily. Older ones have thicker skin and ship better.

Choose smaller Jicama with no blemishes on the skin as blemishes indicate bruises underneath (though colour blotches are fine.) Larger ones can be a bit woody, dry and starchy.

As a member of the morning glory family, Jicama is related to sweet potato, and more broadly even to peas.

The plant is grown from square, brownish seeds. From planting, Jicama takes 5 to 9 months for its roots (tubers) to be ready to harvest. If left unharvested, the tubers can grow 6 feet long (1.8 metres), and weigh about 50 pounds (23 kg) but at this point they are very woody and past their usefulness for food.

Above ground, the plant grows as a perennial, broad-leafed vine about 20 to 30 feet long (6 to 9 metres) depending on variety. It blossoms with light purple or white flowers, which will produce fuzzy beans. The flowers are often removed so that the tubers will be larger.

Attempts so far to grow it in California haven’t turned out well, as the season is not long enough for sizable tuber growth. It is imported into North America from Latin America, primarily Mexico, where there are three main growing areas that produce Jicama timed to hit the markets at different seasons. The central highland area of Mexico, including Guanajuato, produces an autumn harvest; the Morelos area produces a winter harvest; and the Nayarit area produces crops for winter and spring harvests.

Jicama is now popular in Southeast Asia. In the Philippines, where Jicama is called “Singkamas”, the variety grown produces bean pods which people eat while the pods are still very young (2 to 3 inches long / 5 to 7 ½ cm) before seeds have developed. [Ed: see advisory in health notes below.]

Jicama can be prepared any way in which a potato can, but can also be eaten raw or boiled.

Raw Jicama tastes a bit like water chestnuts. It can be diced or cut into strips as a crudité for dips, added to salads or used in stir fries. It will retain its crispness if cooked lightly.

Unlike many other vegetables, such as potatoes or avocados, Jicama won’t go brown right away when exposed to air. If you’re going to leave the cut pieces exposed to air for a long time, however, it is not a bad idea to brush them with lemon or lime juice.

It is often eaten raw with lime juice and chile powder on it.

In Asian cooking, Jicama often appears inside spring rolls. In Thai cooking, it is often used raw in salads, or as a crudité to dip in a sauce.

Above ground parts of the plant are toxic, including the beans (some say they can be eaten when young, but most authorities advise to avoid them entirely.) The natives in Central America used to crush the seeds, and toss them onto the surface of water: the poison would stun the fish, causing them to rise to the top of the water where they could just be raked in. An insecticide rotenone has also been made from the poison in the seeds.

This web site generates income from affiliated links and ads at no cost to you to fund continued research · Information on this site is Copyright © 2022· Feel free to cite correctly, but copying whole pages for your website is content theft and will be DCMA'd.
Tagged With: Asian Food, Mexican Food