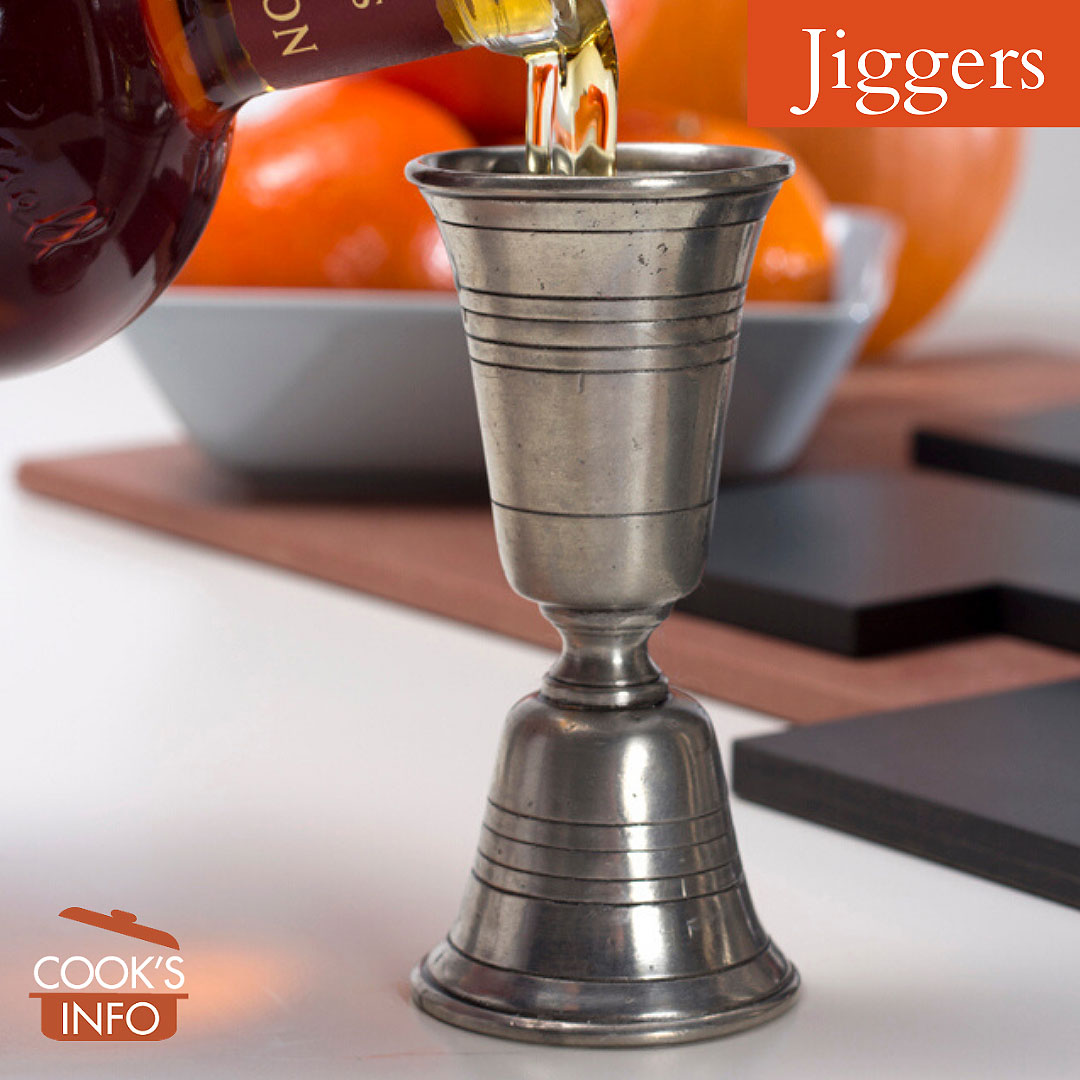 A jigger is a small cup-like measuring tool used primarily in making mixed alcoholic drinks. They are generally made of metal or glass.

It can be important to use a jigger when making a mixed drink, rather than just pouring. An average mixed drink has only about 3 to 5 ounces (90 to 150 ml) of various substances in it, so to get one ingredient measure wrong can make a noticeable difference in the taste of the drink. 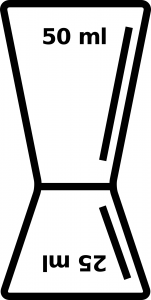 Some, but not all, will have will have measurements on the side. The measurements may be inside or outside the cup; the ones inside can be even harder to see in “party mood lighting.” Most sold, though, don’t actually tell you how much they hold.

Some are a two-part measure with a larger “cup” acting as the base and a smaller one on top (depending on which way you are looking at it of course.) The larger one is the actually one called the “jigger”, it’s 1 ½ ounces. The smaller one on the bottom is called the “pony”; it’s 1 ounce.

In the UK, the large cup on a home-use double-sided jigger might be 40 ml, and the smaller one might be 20 ml.

Ones that are just one-part, usually glass, are called a “shot” glass.

Some jiggers have a handle attached to them.

Determining accuracy of your jigger

That being said, jiggers for home use can be notoriously inaccurate in their measuring lines — if they have them at all, and that to get the maximum measurement on them, you have to fill them up to the brim making some alcohol sure to spill. If you want to see how close your jigger is to being accurate, or see what your jigger holds if it has no measurements at all on it, you can measure water into it using standard North American kitchen measuring spoons. A tablespoon from one of these sets holds ½ oz of liquid (that’s assuming, of course, that you happen to have accurate measuring spoons.)

For home use, though, it doesn’t really matter how much a jigger actually holds, or how precisely accurate it is. As long as you’re using the same shot glass for each measure, all the parts will be in proportion, and that’s what matters in mixed drinks.

Professional bar tenders need to use very accurate jiggers. If you over-measure, you’re losing money, If you under measure and short-change the customer, you could be in trouble with the law.

In Australia, Ireland, Singapore and UK you can buy ones with government stamps on them certifying them as official measures. (You could get similarly approved shot glasses in Canada up until 1982.)

In the UK, in commercial bar drinks, you can only sell alcohol in measures of 25 ml and multiples thereof. So the government will only stamp for trade purposes jiggers in proportions of 25 ml, 50 ml, etc. And they can’t be double-sided ones — they need to be single measure ones.

Free pouring can be done accurately with an “Exacto-Pour” system, but only with training. 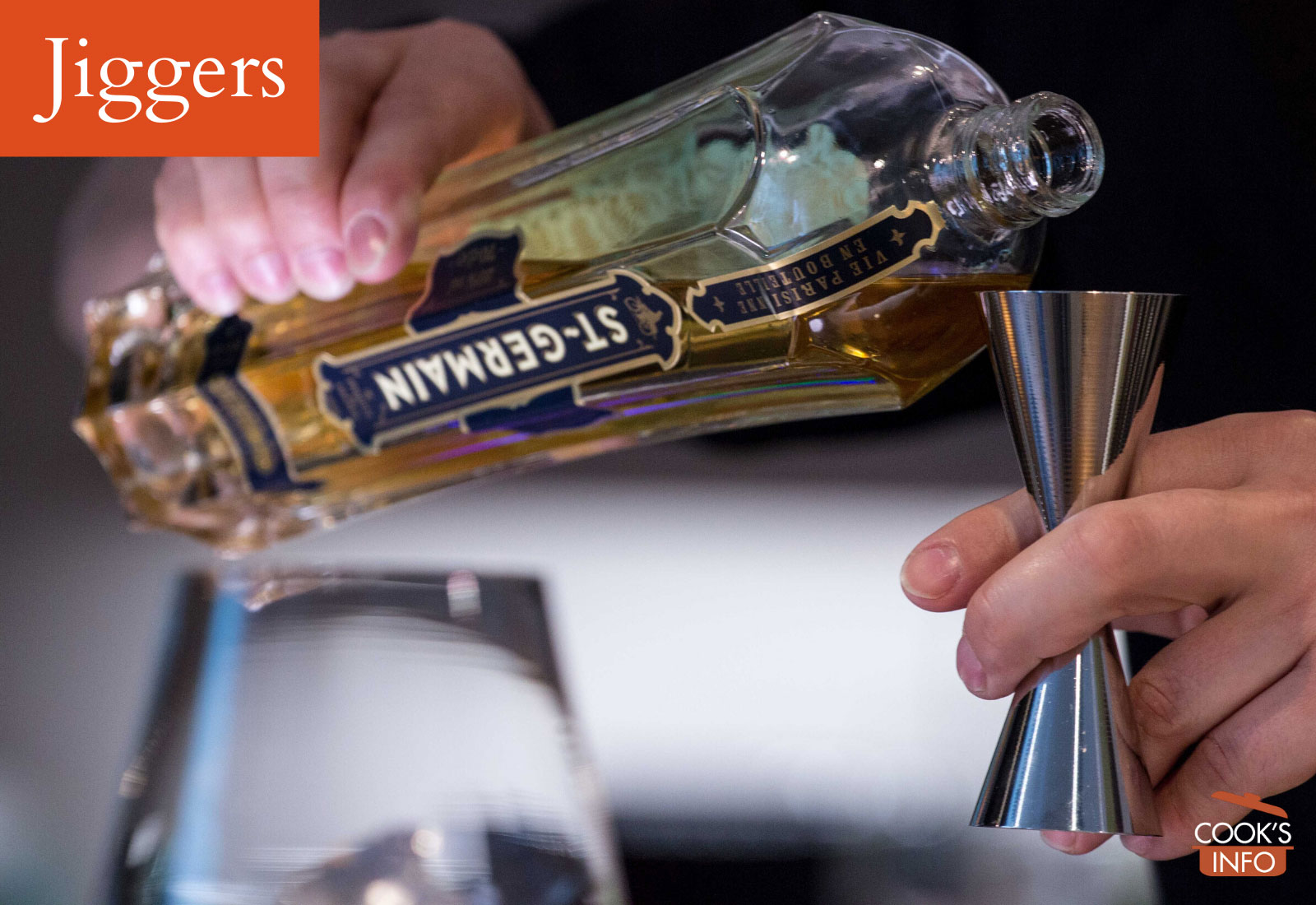 This web site generates income from affiliated links and ads at no cost to you to fund continued research · Information on this site is Copyright © 2022· Feel free to cite correctly, but copying whole pages for your website is content theft and will be DCMA'd.
Tagged With: Alcohol, Cocktails, Conversions, Measuring Tools