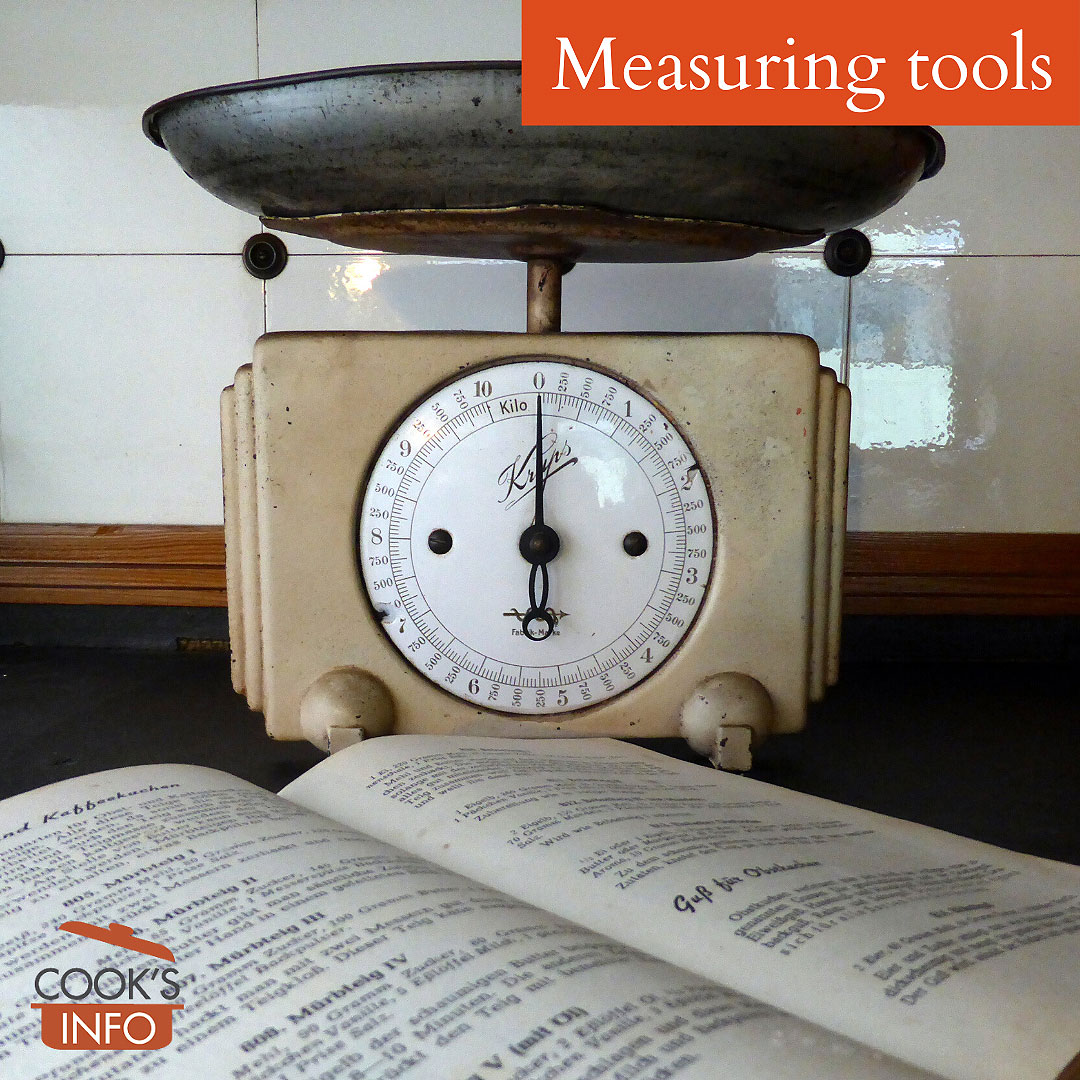 Measuring tools are devices used in cooking to take the amount of an ingredient needed in preparing or assembling a dish. Measuring is usually done in weight or volume, but it may also be done by length in a few instances (such as cinnamon sticks.)

The purpose of measurements is to accurately convey the nature of a dish so that the dish can be successfully recreated by someone else. The measurements needed are obtained by following the directions of a recipe, typically a written one.

Tools to gauge the temperature or doneness of a food also count as measuring tools; see: thermometers.

Are measuring tools for wusses?

It is fashionable amongst some cooks to dismiss the need for measurements, and to praise the “cook by feel” approach. Even Elizabeth David, though, one of the most widely respected food writers of the 20th century, confessed that measuring made her a better cook:

“It is quite possible to combine the exercise of one’s five senses in the kitchen with the use of measuring devices as guides. By temperament a non-measurer, I have myself, first through the wish to communicate recipes and now by force of habit, become the opposite. I find that the discipline of weighing and measuring does one’s cooking nothing but good, provided that one does not waste time messing about with quarter-saltspoons and five-eighths of pints, nor, above all, expect that precision will eliminate the necessity to keep one’s head or train one’s eye and palate…” [1]David, Elizabeth. Measurements and Temperatures. In: Spices, Salt and Aromatics in the English Kitchen. London: Grub Street. 2000. E-edition.

Many people praise a dish that their grandmother or another older person made just by touch and feel without ever measuring the ingredients. When asked if they still make that dish, the answer is invariably no, because the recipe — without measurements to aid knowledge transfer — died with the older person. If the knowledge to recreate successfully the character of a dish is to be passed on, measurements are essential.

A tragic irony of those trying to preserve historical recipes from the past may be that they are recording them in such a way that renders them in the not-so-distant future merely historical curiosities, too hard to use, inaccessible without scholarly knowledge, and therefore guaranteeing that they will be forgotten to history — simply because of the measurements used:

A few years ago, we came across most of these [older] ways of measuring, when we edited a charity cookbook for Wendy’s mother’s nursing home. Our contributors, including several chefs and many professional cooks, were all very experienced in the kitchen.

When we decided that our primary audience was not only our own grandchildren, but the grandchildren, great grandchildren, and great, great, grandchildren of our wonderful elderly cooks, it was very clear to us that we would have to use metric units. We could have used the [older] units in the original recipes, but this would mean that our book would sit on our granddaughters’ shelves – unused – because they couldn’t understand any of the old cooking measures.

More importantly it would mean that the wonderful recipes we collected would be lost to future generations simply because of the difficulty of interpreting the old measuring languages.

Grandchildren of the 21st century might have no-one who can tell them about breakfast cups or gills; whether an ounce is dry, fluid, apothecaries or troy; the difference between an Imperial pint or a colonial pint from the USA; or the precise meaning of spoons or cups that are ‘large, heaped, rounded, level, small or scant’. Such arcane knowledge will soon be gone. The children of the 21st century will cook using the International System of Units that most of us usually refer to as the metric system… we fear that many old priceless recipes of our mothers, grandmothers and great grandmothers may be lost.” [2]Pomroy, Wendy and Pat Naughtin. Metric cooking with confidence. Belmont, Geelong, Australia. Metricationmatters.com 2008. Page 1.

Elizabeth David, writing in the 1960s, was one of the first modern writers to address the differences between American, English and continental measuring instruments. While she couldn’t do anything to rationalize them for readers, she did manage to explain the rationale of each within its own context, and to warn readers of “faux amis” — “false friends” — lurking in US and English terms.

“A tin is an English round fifty-cigarette tin, at one time a fairly common unit of measurement in Egypt and other parts of North Africa and the Middle East. It holds 8 fluid oz., the same as an American measuring cup. When I see this unit occurring in a traveller’s cookery book I feel reassured that the recipe is genuine, probably written down from dictation by some Berber, Persian or Sudanese cook. Infuriating instructions, though, to anyone not in the know. In the same way, some of the best of old French recipes are the kind which specify ‘un bol de creme fraiche’ or ‘un verre de farine.’ Maddening until one twigs that the French have a different word for every kind of bowl they use, and that a ‘bol’ is not a salad bowl or a mixing bowl of unspecified capacity, but the bowl from which you drink your morning café au lait, in fact a cup; so to use it as a measuring unit is perfectly reasonable since every French household possesses — or did possess — such bowls, and their capacities, half-pint, near enough, vary little. Those glasses of flour, it can usually be taken, are tumblers of six-ounce capacity, because if French cooks mean a wine glass they say ‘un verre à Bordeaux’ and if they mean a small wine glass they say ‘un verre à porto’— a sherry glass to us.

As for scales and weights, in American household cooking they simply do not exist. The American system of measuring liquids and dry solids in standard cups and tablespoons is not very accurate but eliminates clutter in the way of measuring apparatus and means that everyone knows where they are when they read recipes. Except, that is to say, ourselves. Because when we are told that the American measuring cup contains exactly a half pint of liquid we are often not also told that the American pint is sixteen ounces, whereas our Imperial pint is twenty ounces. Although it wasn’t, until 1878; a point which one has to remember when attempting to adapt recipes from eighteenth and the early nineteenth century books — later, in the transition period, one often has no means of knowing whether the author was using the sixteen-ounce or twenty-ounce pint… Subtract eight ounces from each of those quarts of stock and wine, milk and cream specified in the older books and it makes quite a difference. The same applies to American cookery books and American translations of foreign cookery books published here without clear indications as to the measurement system used…

Where I find the American measurement system messy, unreliable and time-wasting is when it comes to cramming sticky things like butter or fat into a cup — incidentally, a stick of butter, sometimes specified in American recipes, means two ounces: a weight in which you can buy butter in the States — and I have never been very successful in measuring cooked ingredients such as chopped meat or diced potatoes in cups. Do you cram the stuff down? Do you give it a good rattle so that it settles — or alternatively flies all over the place? Just press lightly, my American colleagues tell me. How lightly is lightly? And how much does it matter?” [3]David, Elizabeth. Measurements and Temperatures.

“Many cooking terms that you see in old recipes come from a medieval English ‘doubling’ method for measuring volumes that went something like this: 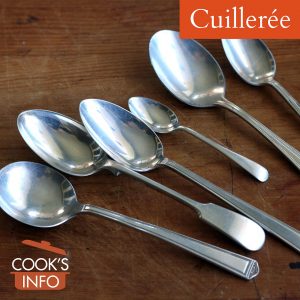 A "cuillerée" is a French home cooking measurement term that means "spoonful." 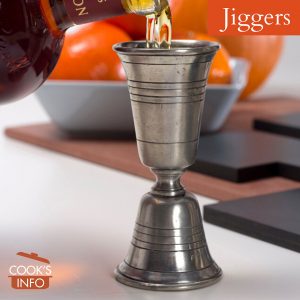 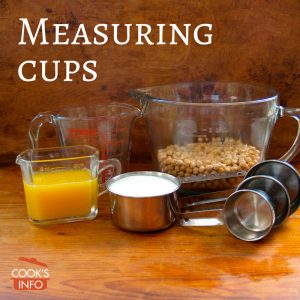 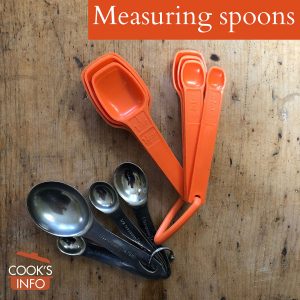 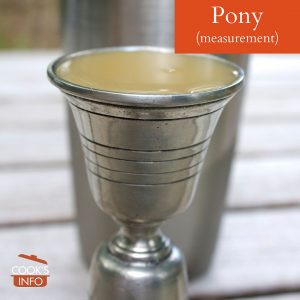 Pony is a measurement used in making cocktails. It's equivalent to 1 ounce / 30 ml / 2 tablespoons. 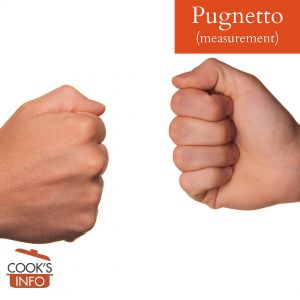 "Pugnetto" is an Italian imprecise kitchen measurement. It means "a small fistful." 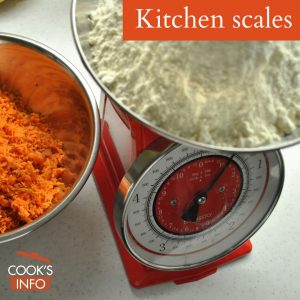 Scales are devices used to measure food items by weight for both selling and cooking purposes.