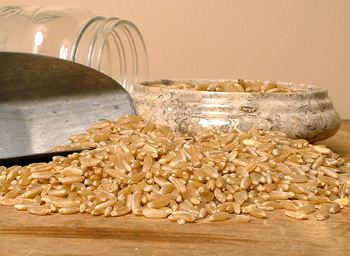 Kamut® is a trademarked name owned by Kamut International, Ltd used for a grain. To use that name, growers have to sign a licence agreement to grow the grain following certain standards (organic, etc), and pay royalties. A product can’t use the name Kamut® prominently unless the flour in it is more than 50% trademarked Kamut® .

The grain is actually called Khorasan.

Khorasan is a member of the grass and wheat family. The plant grows up to 130 cm (51 inches) tall.

The grains are hump shaped and looks somewhat like long grain brown rice. They are twice the size of wheat kernels.

Khorasan is not as chewy as other wheat kernels when cooked. The usual description of “nutty” is hauled out, but actually the taste is pretty bland and neutral, make the grain ideal to use along with stronger tasting ingredients in a recipe.

The leaves are also being used to make wheat grass juices.

Khorasan takes far longer to cook than a grain such as brown rice — 2 hours in a regular pot, 30 minutes in a pressure cooker.

Here’s how to prepare it as a side grain on its own:

That being said, the taste is bland, so rather than being served on its own, many advise that it is best used as an ingredient in spicy recipes or to complement other ingredients with a lot of flavour.

Khorasan will make a heavier loaf of bread if normal wheat is not added, though Khorasan flour and spelt flour is a good combination.

Some people who are sensitive to gluten can tolerate the gluten in Khorasan. You’ll want to check with your physician to have allergy testing done before trying Khorasan, if you are allergic to gluten.

Though still not a complete protein, Khorasan is 30% higher in protein than normal wheat, so it is being marketed as a wonder grain.

Khorasan originated in Egypt. Historical claims made for Kamut include that it was grown in Egypt 4,000 years ago.

The seeds were sent to America in 1949 by an American airman from Montana stationed in Portugal. He had been given or sold 35 kernels of the wheat that he was told that came from the pyramids in Egypt (another story says the person who passed it to the airman got it straight from a tomb near Dashare, Egypt.)

He sent them home to his dad who was a wheat farmer in Fort Benton, Montana. His dad planted them; 32 of the kernels sprouted. Within 6 years, his dad had a harvest of 1,500 bushels of the grain. He showed the grain at the Chouteau County fair, branded as “King Tut’s Wheat”. He wasn’t able to drum up any interest, though, so he sold it off as cattle feed. He tried again handing out samples at fairs in the early 1960s, but it still didn’t catch on.

In 1977, a man named Bob Quinn and his father T. Mack Quinn managed to find a small amount of the grain remaining in a jar in Fort Benton. They built the seed stock back up to 41 kg (90 pounds) by 1980. Bob Quinn registered the name “Kamut” as a trademark name for the grain in 1988, and introduced it as a health food. He called it Kamut because he believed that was the Ancient Egyptian word for “wheat.”

By 1992, 2.27 million kg (5 million pounds) were being harvested in North America in Montana, Alberta and Saskatchewan. As of 2004, almost 50% of the grain is being exported in one form or another to Europe.

The United States Department of Agriculture (USDA) recognized the grain in 1990. They called it “QK-77” at first. In directive 9180.60 (30 Dec 2003), the USDA decided to change all references to the grain from “Kamut” to the generic, un-trademarked name of “Khorasan”, and to classify it as a spring wheat.

Research has shown that Khorasan / Kamut definitely belongs to the types of wheat that originated in the Middle East. It couldn’t, however, really have been grain from the pyramids — other attempts have been made to sprout 3,000 year old wheat kernels to no avail. It was probably instead just the very last of a strain that had somehow been kept alive somewhere in the Middle East. Scientists are now unable to locate any of it still growing native in the Middle East, perhaps because in the last half of the 1900s Middle East farmers marked their growing prosperity by switching to planting wheat instead of the older, traditional grains (such as perhaps Khorasan) that they had previously grown.