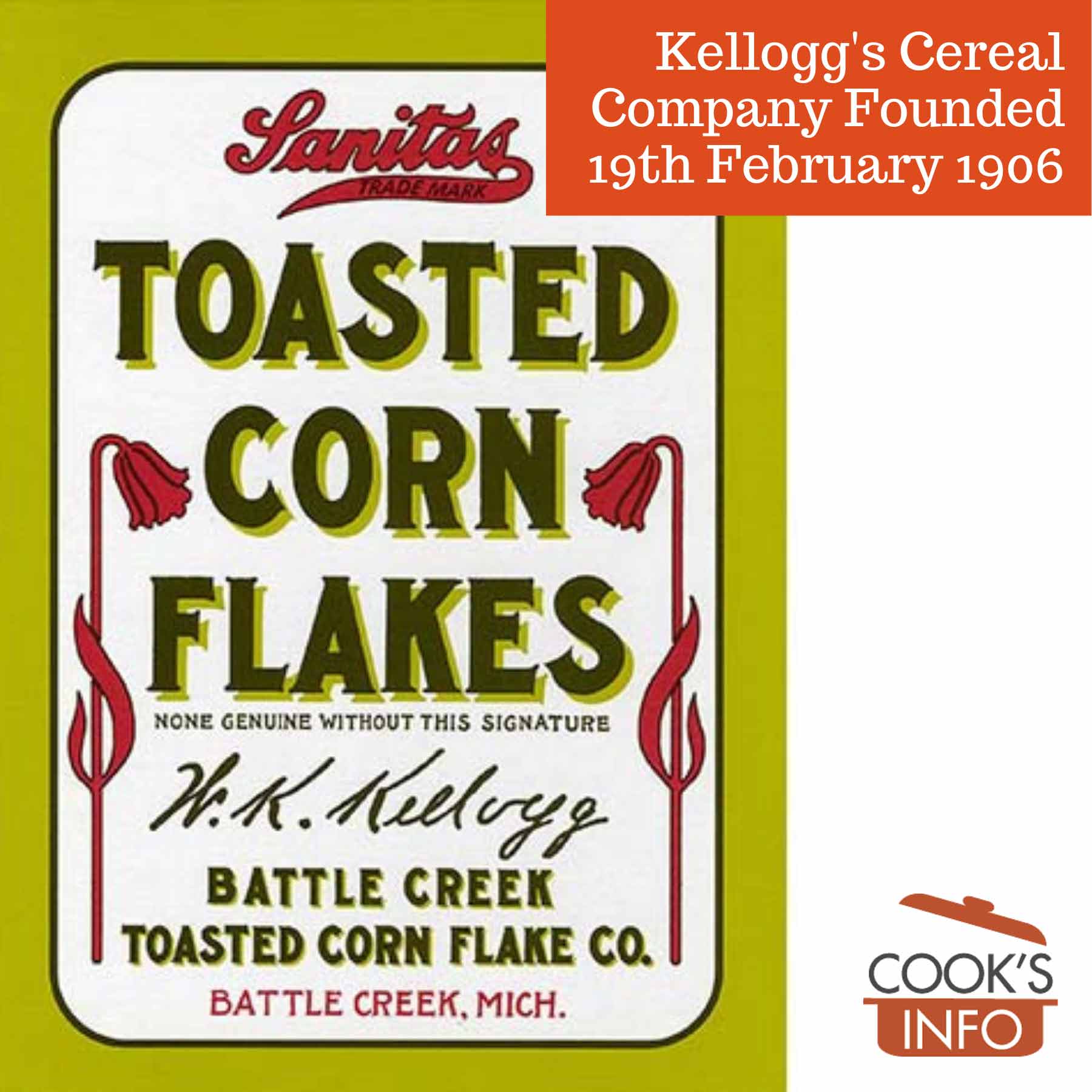 The 19th of February is the birthday of the Kellogg Cereal Company.

On this day, in 1906, William Keith Kellogg founded the company he originally called the “Battle Creek Toasted Corn Flake Company” in order to make and sell his Corn Flakes cereal commercially.

The story actually started with his brother, Dr John Kellogg.

John Kellogg (26 February 1852 – 14 December 1943) was one of the most famous physicians in the world at the time. He edited a magazine called “Good Health” that was read around the world, and he ran the world-famous Battle Creek Sanitarium. [1]”Among Dr. Kellogg’s patients were William Howard Taft, William Jennings Bryan, John D. Rockefeller, Jr., Alfred Dupont, J.C. Penny, Montgomery Ward, Lowell Thomas, Thomas Edison, Henry Ford, George Bernard Shaw, Admiral Richard E. Byrd, and many others. Soon Dr. Kellogg’s views on diet and health spread across America and around the world.” — Shurtleff, William and Akiko Aoyagi. Dr. John Harvey Kellogg and Battle Creek Foods: Work with Soy. In: History of Soybeans and Soyfoods, 1100 B.C. to the 1980s. Lafayette, Californi: Soyinfo Center. 2004. Accessed February 2021 at https://www.soyinfocenter.com/HSS/john_kellogg_and_battle_creek_foods.php

Will, John’s younger brother, came to work for him at the sanitorium in 1880 to manage the business side of the institution. The two had a troubled relationship:

“The doctor was eight years older than Will, and he humiliated and browbeat his brother for their entire lives. When they were kids, it was physical [attacks as well as] taunting and such, but even when they worked together, the doctor treated him like a lackey. He paid him very poorly. He humiliated him in front of the guests. The doctor was so busy, he would ride his bike across the campus. Will would run, and huff and puff while he took notes, so the doctor wouldn’t miss a stitch on his great ideas. They didn’t have a great relationship.” [2]Wharton School. How the Feuding Kellogg Brothers Fought their Cereal Wars. Podcast with Howard Markel. University of Pennsylvania. 26 September 2017. Accessed February 2021 at https://knowledge.wharton.upenn.edu/article/the-bitter-feud-behind-an-iconic-brand/

John and Will had set up the Sanitas Food Company as a side business, and were making cereal products such as granola biscuits, wheat flakes, and corn flakes. The idea was to make easily-digestible food for sick people. The products were just a sideline to the main sanitorium business, and the customers were former guests and patients at the sanitarium.

Competitors came along, stole the cereal product ideas sometimes simply just by changing one ingredient, and started marketing the products aggressively. One of them was C.W. Post and by 1900, his Postum Cereal Company was making $3 million a year.

As the business side of the operation, Will must have been galled to see others profit greatly from their ideas. He saw the potential for expanding the Sanitas Food Company cereal business:

“He saw right away that there are a lot more of healthy people who just want to have a healthy, nutritious breakfast than sick people who want an easily digestible one.” [3]Wharton School. How the Feuding Kellogg Brothers Fought their Cereal Wars.

Will had worked at the Sanitorium for around 25 years by this point, so perhaps he was also ready to take on fresh challenges.

But John wasn’t really interested in expanding the cereal business beyond selling it to the core clientele of the Sanitorium. He was busy with other things.

Consequently, Will quit the Sanitorium to set up his own company to get into the breakfast cereal market seriously. It was also a chance to get out from under his brother’s thumb, finally:

“By 1906, Will had had enough of working for his domineering brother, who he saw as a tyrant who refused to allow him the opportunity to grow their cereal business into the empire he knew it could become. He quit the San and founded what ultimately became the Kellogg’s Cereal Company… ” [4]Markel, Howard. The Secret Ingredient in Kellogg’s Corn Flakes Is Seventh-Day Adventism. Washington, D.C.: Smithsonian Magazine. 28 July 2017. Accessed February 2021 at https://www.smithsonianmag.com/history/secret-ingredient-kelloggs-corn-flakes-seventh-day-adventism-180964247/ 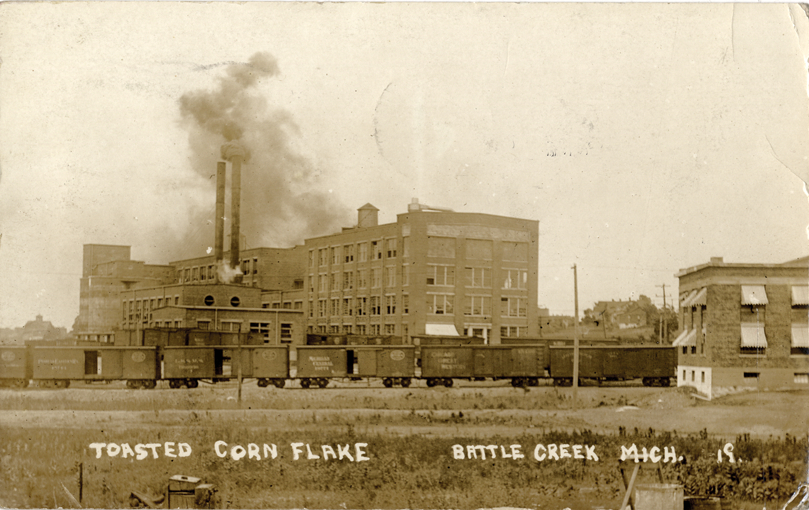 A few years later, Will’s company would launch Rice Krispies, also developed by Will, and then other cereals soon came along. Reputedly, Will also “stole” some cereal recipes from John. “Of course, the doctor came up with all these [recipes for] bran cereals that Will stole. It was very easy to steal a cereal recipe, even if it was patented.” [5]Wharton School. How the Feuding Kellogg Brothers Fought their Cereal Wars.

Will invested heavily in advertising promoting his cereals under the Kellogg name. Meanwhile, the Sanitas company continued in business, selling cereals, with John Kellogg’s name on them.

“… that took away from Will’s brand. He actually sued the doctor, and the doctor countersued. The lawsuit went all the way to the state supreme court over the issue of who had the right to use the name Kellogg on a box of cereal. The doctor thought, “I’m the world-famous doctor. I’m the digestive guru. It’s me.” And Will said, “Hey, wait a minute. I spent millions of dollars advertising Kellogg’s Corn Flakes. They think of me.” And guess what?  Will won.” [6]Wharton School. How the Feuding Kellogg Brothers Fought their Cereal Wars.

“After the court case[s]… they rarely spoke to one another. Their last face-to-face meeting was a terrible argument, and John died only a few months later. It’s really quite sad. John did try to make amends, but Will would have none of it. They both went to their graves very sad about how acidic this relationship became.” [7]Wharton School. How the Feuding Kellogg Brothers Fought their Cereal Wars. 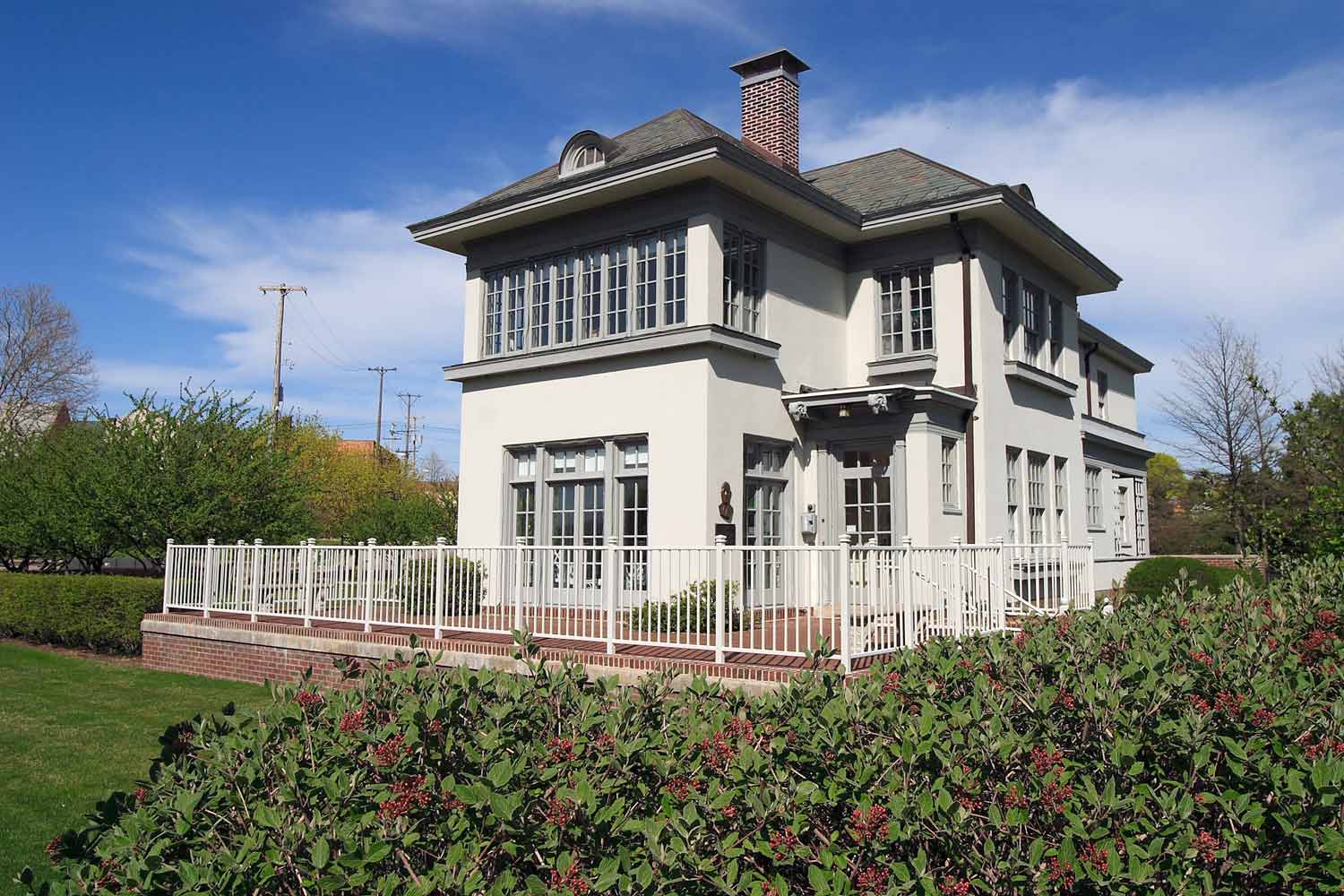