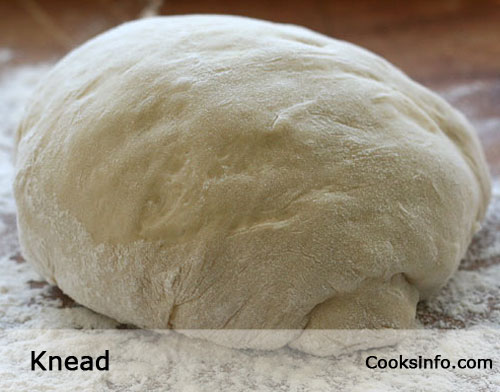 To Knead is to “work” and stretch a piece of dough.

The purpose is to develop the gluten in the flour used in the dough. It causes the dough to get smoother and more elastic.

It is done mostly with yeast-risen doughs. The resultant elasticity gas emitted by the yeast to be trapped in the dough, causing it to rise. The kneading also divides and spreads out air bubbles which have already started forming, helping to avoid large holes in the cooked dough. Without sufficient kneading, your dough when cooked won’t rise as much as it should.

Kneading can be done by hand or with machines. Some kitchen machines, such as mixers and food processors, come with a dough attachment (or you can purchase one.) Others, such as bread machines, have the kneading as an integral part of what they do.

Kneading is a great deal of work to do by hand. You fold the dough in half by grabbing the side of dough furthest from you, and bringing it towards you. You then press the heels of your hands into the dough, and push it away from you. Give the dough a quarter turn, then repeat the process. For a dough made from 5 to 7 cups (25 to 35 oz / 700g to 1 kg) of flour, it should require about 10 minutes of non-stop work. The dough is sufficiently needed when it springs back to exactly where it was when you press down on it.

Dough kneading machines were in use already by the late 1800s in hotels and restaurants. A Boston man named Joseph Lee (19 July 1849 to 1905) received US patent number 524,042 on 7 August 1894 for developing a machine that both mixed the ingredients for bread dough, and then kneaded the dough. The machine was able to do the work that previously required five to six men, and did so more hygienically as well. The resulting dough was also considered to be of a finer and more consistent texture. Today’s commercial dough-kneading machines evolved from his design.