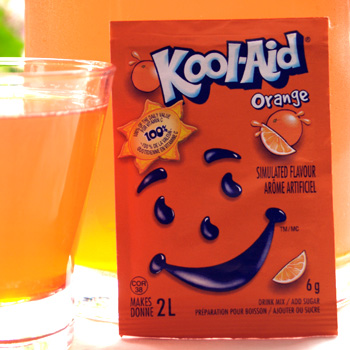 Kool-Aid® is a soft drink. It is made from flavoured powder that you dissolve at home in water, sweeten with sugar which you supply yourself, and then chill in the fridge or with ice cubes, or both.

It is available in small packets that will make one jug; large households can buy the powder in canisters.

Kool-Aid has some very devoted fans. One thing they are known to do is to assemble tables of which flavours were released where, when they were introduced and which ones were discontinued and when. For example, Pina-Pineapple appears to have never been released in Canada. Reputedly, the favourite flavour of the inventor, Edward Perkin (see History), was Raspberry, but that has now been discontinued.

Some people are avid collectors of the packets from the past.

In Canada, Kool-Aid is made in Cobourg, Ontario (current as of 2011.) In the US, it is made in Chicago, Evanston, Illinois and Modesto, California.

Kool-Aid is also sold in Brazil, Columbia, Japan, Russia, The Philippines, and Venezuela. It is not sold in the UK.

Honey is not a good substitute for sugar when mixing up Kool-Aid as it doesn’t dissolve well, and the flavour can be overpowering. Brown sugar can be used, though it will affect the colouring.

Some people recommend only using half the water, then topping up with ginger ale.

There are hundreds of recipes for cooking with Kool-Aid, from cake icings to marinades.

Kool-Aid powder can also be used for tie-dying 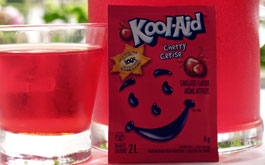 Kool-Aid was created by Edward Perkins, who was born 9 January 1889 in Lewis, Iowa.

Perkins looked at Jello-O jelly powder and got ideas of what he could do with a concentrated drink substance that was a powder, instead of a liquid. In 1927, he began trying to dehydrate and concentrate the syrup into a powder, in order to sell the powder in an envelope and reduce shipping costs. He was successful, and changed the name from Fruit Smack to Kool-Ade in 1928.

Perkins moved production of Kool-Ade to Chicago in 1931. In 1934, he decided to change the name to Kool-Aid, but then found that the patent for Kool-Aid had belonged since 1914 to a man named Jake Ross in Lewis, Iowa, who used the name to describe a lemon drink he made. Perkins wanted the name so much, though, he bought it from Ross. No one is quite sure why he wanted the name change to. There are a few theories why, such as at the time, government people complained that ade could only be used for juice — no such restrictions exist now in America.

Kool-Aid was sold for 10 cents for a 1 oz package. The price was cut back to 5 cents a package in 1933 during the depression.

In 1953, his company, the Perkins Products Company, was bought by General Foods. At that time, advertising began using a large frosted pitcher with a smiley face on it. Two other variations were used, a heart, and the symbol for 5 cents, but the smiley proved to be the favourite, and so by 1954 it was used exclusively. In 1954, the product also became available in Canada.

The Root Beer flavour was discontinued sometime between 1955 and 1957.

Perkins died in 1961 in Rochester, Minnesota.

In 1964, pre-sweetened Kool-Aid was released. By that time, the pitcher had become the rounded one known today, and the round smiley face picture was trademarked.

Cyclamate was used in the 1960s for the pre-sweetened Kool-Aid powder. The use of cyclamate in America was banned on 18 October 1969, based on lab studies which are now disputed by some researchers.The product with cyclamate in it was transferred to markets outside the US, which some Americans saw as an “evil move” by the company. [1] What they may not have realized, however, is that cyclamate was never banned in many other countries, and its use continues to be legal in Canada, the EU, etc. In fact, Health Canada banned saccharin instead of cyclamate.

In Jonestown, Guyana, a cult church leader named Jim Jones had his followers kill themselves on 18 November 1978 by drinking a fruit drink laced with potassium cyanide. The largest mass suicide in history, it’s estimated between 911 and 914 people died.

It’s a myth that it was Kool-Aid. It was actually Flavor-Aid, a cheaper drink powder.

This web site generates income from affiliated links and ads at no cost to you to fund continued research · Information on this site is Copyright © 2022· Feel free to cite correctly, but copying whole pages for your website is content theft and will be DCMA'd.
Tagged With: American Food, Soft Drinks