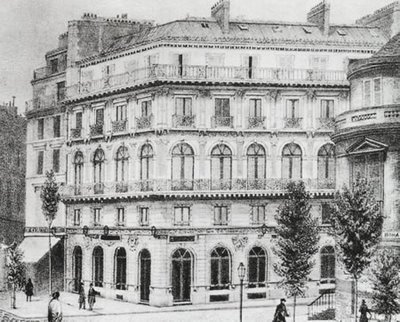 La Maison Dorée, located at 20, Boulevard des Italiens, was one of the most famous restaurants in Paris in the 1800s.

It opened in 1840 in a building that was five storeys tall. Previously, it had been the site of the Café Hardy, and before that, the Choiseul-Stainville mansion. Next door, at number 18, was the Café Riche; on the other side, at number 22, was Tortoni’s.

La Maison Dorée was owned first by Louis Verdier, and then later by his two sons, Charles et Ernest Verdier.

The restaurant had a two-floor underground wine cellar of 80,000 bottles: the upper level was Spanish and spirits that didn’t need aging; the lower level was French wines, and Italian wines. Upstairs, the restaurant had two sections, one reserved for the more elite in society.

In 1859, the famous chef Casimir Moisson (born 1833) came to work there as a chef. Previously, he had been at the “Restaurant des trois frères provençaux”, where he worked under Adolphe Dugléré. Casimir arrived there when he was twenty-six, and stayed there for the remainder of his career, retiring in 1903 at the age of 70. He went to live at his house at Saint-Martin-les-Rimas (Basses-Alpes.) He did not publish any books.

Celebrities frequently ate at the Maison Dorée. It was a favourite restaurant of opera writer Gioacchino Antonio Rossini. Some people believe that Tournedos Rossini were created there for him by Moisson.

In 1869, Verdi came there after the French premiere of his opera “Aida.” He ordered Bresse chicken.

The restaurant closed in 1907. The outside of the building was remodelled, and it was reopened as a post office in 1909. In 1973, it became a branch of the Banque Nationale de Paris (BNP). A plaque commemorating the restaurant was placed on the building in November 2005. As of 2013, the building is still a BNP branch.