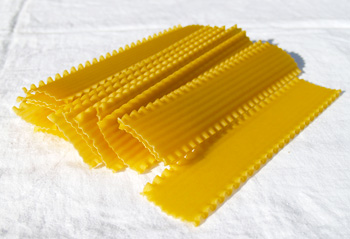 Lasagna noodles are thick, wide noodles about 2 to 3 inches wide (5 to 7 cm.) The edges and faces can be either ruffled or smooth.

They are used for making baked pasta dishes with.

These have actually already been cooked for you.

Still, they have to absorb moisture from somewhere, and where they absorb it from is the tomato sauce and the cheese, so make the lasagne a bit more runnier going into the oven than you would otherwise by using more sauce or adding a bit of water to the sauce.

Though normally you would be careful anyway to cover all the noodles with sauce and filling, with these you need to be particularly so, or they will just remain dry.

This is the classic pasta dish made with lasagna noodles. The noodles are used to separate layers of food, such as cheese, sauce and meat (though some modern versions use vegetables.) The dish is baked in the oven.

Southern Italian traditions will use tomato sauce with ricotta (Sicilican version) and / or meatballs. Most North Americans tend to make a combination of the Bolognese version and the Sicilian version, by substituting the bechamel sauce with ricotta or cottage cheese.

Etruscan paintings of banquets show the guests eating something like lasagne.

The Romans had wide noodles they called lagunae / laganum, though you could only really call these lasagna noodles if you called every wide noodle a “lasagna” noodle, as the Romans used theirs in soup.

Wealthy Romans would have fresh lagunae noodles made with eggs; normal people would have dried versions made without egg.

That much, at least, hasn’t changed.

In Naples, called “laganelle”; in Campania, “lagane”; in Calabria, “laganedde”; in Basilicata, “laane.”