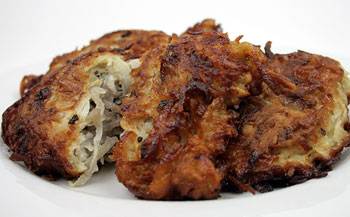 The Eastern European version of Latkes is the one most familiar in Europe and North America. They are made with made with grated potatoes, eggs, onion and matzo meal and served with applesauce or sour cream.

There are other varieties: in Syria meat is added, in the Balkans cottage cheese is put inside, in Algeria they are made with couscous, in Hungary garlic is added, and in Morocco, Jews there add sesame seeds and coat them with sugar after frying.

Latke is a Yiddish word. In Israel, they are called “levivot” in Hebrew, even though “levivot” means any kind of pancake, not just ones made with potato. Before potatoes came along, Latkes were made of flour, and stuffed with cottage or cream cheeses.

It used to be traditional in Eastern Europe to fry Latkes in goose fat.

Latkes are traditional to make and eat during Chanukah, otherwise known affectionately as the “Fried Food Festival.”

Use floury potatoes — the kind you would use for baking.

Grating by hand or a food mill is ideal. A fast whiz in a food processor can be a bad idea, because high speed grating breaks down potato cell walls and releases a lot of starch, which will make your mixture a sodden gloop. Some people report food processor success by using a grating disk; others say it’s still too fast. As soon as the potatoes are grated, cover them with cold water until you are ready to use them, to prevent their oxidising and going brown. (People who do do theirs in a food processor with the grating disk claim that whizzing the potatoes with onion at the same time will also stop the potatoes from discolouring.) When you are ready to use the grated potato, drain it on paper towel first to get the water out. You can also buy shredded raw potatoes in bags in the frozen foods section. They are treated with citric acid to stop them from discolouring.

Squeeze all the water out of the grated potatoes that you can, because you are squeezing starch out. You can even put them in a tea towel or paper towel and squeeze. Some recipes have evolved, though, which take advantage of the starch, so that you don’t need to worry about squeezing the potatoes so thoroughly. Your recipe will usually indicate which way to go. But the key really is to get as much water out of the grated potato as you possibly can.

Serving Latkes is tricky. Really, they’re meant to go straight from frying pan to plate on table in front of an eagerly waiting recipient. This is hard to do, though, if you’re cooking for any more than two people who are civilised enough to wait for everyone to be served before starting on their own (no guarantees.) There’s no perfect answer. You can put the cooked Latkes in a heated oven on a baking sheet, with paper towel between the layers, though the crispy, grated-style ones will go a bit soft. Or, cook them all in advance almost to the point where they are finished, then set them aside (in the fridge if need be for longer time periods for food safety), then give them all a final, finish-up fry just before serving.

“I’m a little latke, round and brown,

Here is my upside, here is my down.
When I am all ready, take a bite,
And eat me up on Chanukah night.”