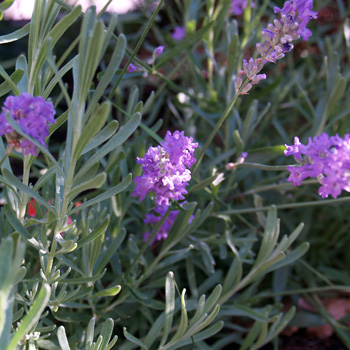 Lavender is an herb with long, narrow leaves and small purple flowers that grows in clusters on spikes. Both the leaves and flowers are heavily scented. Lavender can be grown from seeds and cuttings. Once settled in, it can grow up to 3 feet tall (1 metre) and is a perennial. It will also self-seed.

Lavender can be used fresh or dried in both sweet and savoury dishes. Don’t use the dried stuff that comes in potpourri; that’s not edible because it’s been treated with chemicals.

Dried Lavender is used in Herbes de Provence. It is often sold as a “tea”, so look for it as a tea if you can’t find it under herbs.

People tend to be very surprised when you talk about cooking with Lavender. Lavender is now mostly used in cooking in France, particularly in Provence, and in Middle Eastern cooking.

Use sparingly; used in too great a quantity Lavender can give a slightly bitter taste.

If you are going to cook with the flowers, it’s best to cut them just before the buds fully blossom — the flavourful oil in them will be at its highest then.

Lavender is sometimes used to infuse milk for custards and crème brulée. Often a sprig of lavender is put on top of a pot of preserves such as Apricot before the jar is sealed for flavour.

1 teaspoon of dried Lavender can be used per 1 cup (8 oz / 250 ml) of heavy cream before whipping, or add 1 teaspoon to liquid that you are poaching fruit in.

Lavender is native to the Mediterranean. In addition to using Lavender as a medicine, Greeks used it to flavour wine and vinegar.

Lavender may already have been brought to Britain by the time the Romans arrived — there’s no clear record. If Lavender wasn’t there, they would have brought it, as they used it and introduced it throughout Europe. The Romans also used it for flavouring wine.

It was used as an herb in cooking in England up until Tudor times. 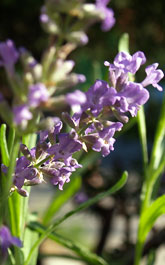 “Here’s flowers for you;

Hot Lavender, mints, savoury, marjoram;
The marigold, that goes to bed wi’ the sun
And with him rises weeping: these are flowers
Of middle summer, and I think they are given
To men of middle age.”

It is an oft-repeated myth that Romans would use Lavender in their baths. This does not even begin to make sense when you connect it with the fact that though punctilious in their bathing, Romans went to public baths.

The English word “Lavender” comes from the Latin word, “lavare”, to wash. Lavender was used as a medicine. One use was to wash wounds with Lavender washes (done as late as the First World War).

This web site generates income from affiliated links and ads at no cost to you to fund continued research · Information on this site is Copyright © 2023· Feel free to cite correctly, but copying whole pages for your website is content theft and will be DCMA'd.
Tagged With: French Food, Provençal Food