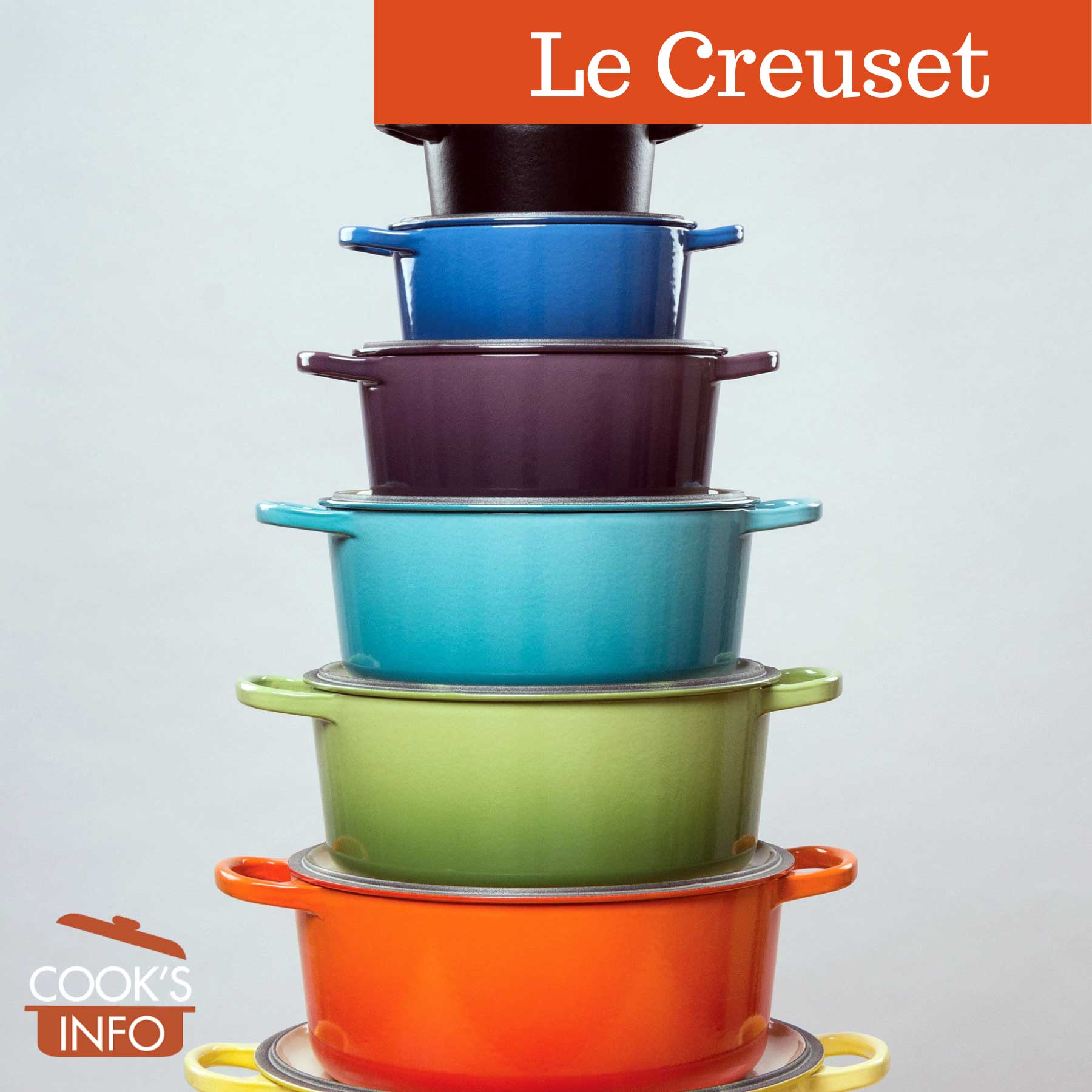 Le Creuset is the brand name of a line of stove and ovenware. It is best known for its cast iron pots and pans coated in porcelain enamel.

These pots are easier to clean than regular uncoated cast iron, while providing all the benefits of cast iron such as even heat. The handles may be rolled iron, or wood, especially on the saucepans. The surfaces are stain and scratch resistant.

The cooking vessels are heavy in weight, and colourful and decorative enough that you can use the pots as tableware, serving directly out of them.

The cookware is expensive, targeted at the middle to upper class population. It comes with its famous 101 year guarantee. It’s not really used professionally, though: it’s for homes.

Le Creuset cookware is good for low, slow cooking such as that involved in stews and braising. It is not really marketed as non-stick, but some users complain the cookware gets stickier over time. The phenolic resin knobs that come with most of the items are only oven safe up to 190 C (375 F.) You can order stainless steel knobs to replace them with.

No two pieces of Le Creuset are ever exactly the same, owing to the casting process. Each piece is made from a fresh two-piece sand mould, after which each mould is broken back into sand. The cast piece is then “fettled” — smoothed down by hand, then blasted by tiny metal petals to prepare the surface to be enamelled. The piece gets a first coat of clear, uncoloured enamel, then a second coat of coloured enamel. It is then air-dried and vitrified. Each coat is fired at 800 C (1472 F).

Some of Le Creuset’s skillets can have shorter sides than do other makes of skillets.

The flame orange colour (“volcanique”) was introduced in 1934. There have been rumours from time to time about it being discontinued but it is still available brand new in stores. In 1956, the Elysees Yellow (saffron) was introduced. Some colours offered have been exclusive to some stores, such as Electric and Sonoma Blue (Williams-Sonoma) and Olive (John Lewis.)

In the 1970s, there were two black finishes used on skillets: a non-stick one, and a satin black enamel. The non-stick was discontinued: it did not last well, it seems. It could flake if the pot or pan were exposed to too high heat (e.g. being left empty on a hot burner.)

The satin black enamel interior finish stands up to heat better. It is used in their wok, chicken fryer, on their griddle / grill pans, and in some skillets. You don’t need to season this as you would regular cast iron: remember, it might look like brand new unseasoned cast iron, but you are really seeing enamel.

In Japan, the favourite colour is the cherry red. The heart-shaped Dutch oven has also proved popular in Japan.

Some people like to maintain a colour line, and have all their Creuset in the same colour. 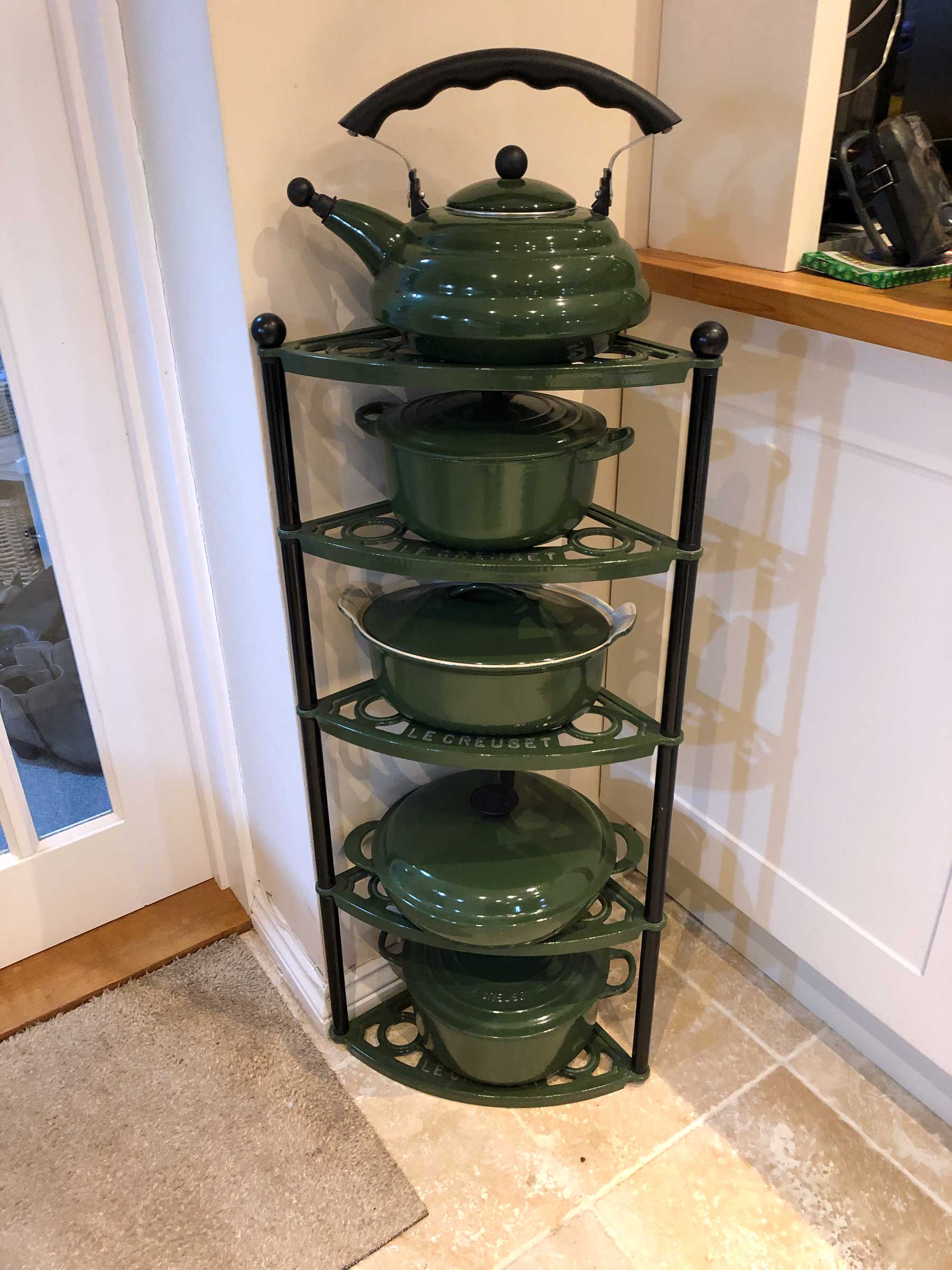 The outside coloured enamel can be hard to clean, but you can use oven cleaner on it.

The light interior enamel can stain over time if you use it for high-heat searing of meat, or brown things in it, or burn tomato sauces in it, etc. Bleach cleaners can remove the stain, but some think such cleaners may make the enamel more susceptible to future stains, and to increased sticking. Don’t use abrasive powders or creams, or scouring pads and metal brushes, to clean the insides or the interior enamel coating will wear down over time.

Don’t pour cold water into a very hot Le Creuset pot or the pot may crack.

Don’t use any stovetop heat setting higher than medium with this cookware.

Don’t put under a broiler. 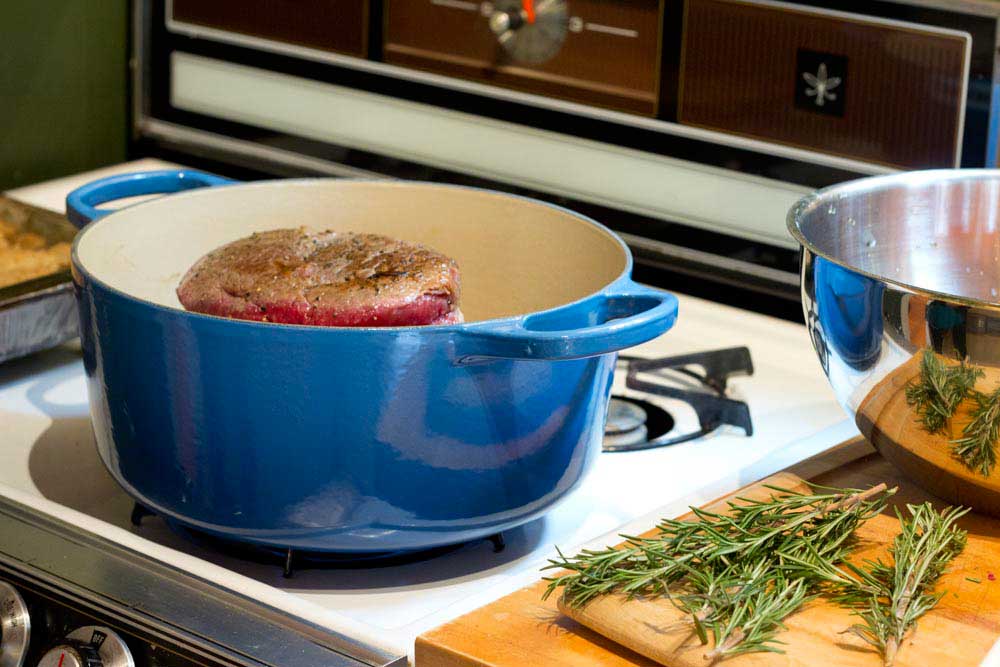 Lead is not used in the enamel — it couldn’t be, owing to the high firing temperatures required for the manufacturing process.

Cadmium was used in the coloration of some enamelled brands of cookware (not just Creuset) up until the 1970s to get really bright exterior colours, until the American FDA expressed concerns about it. Le Creuset changed their glaze formulas to ensure that no cadmium is released during cooking. Worth noting as well, perhaps, is that the glaze where the cadmium is, is only on the outside of the pot.

The technique of porcelain enamel was discovered about 1830 in Czechoslovakia.

In 1924, Armand Desaegher and Octave Aubecq, both Belgian, met at an industrial Exhibition in Brussels. Desaegher was an iron-caster; Aubecq was an enameller. They decided to go into business together creating enamelled kitchen vessels.

They set up their factory in 1925 in Fresnoy-le-Grand dans l’Aisne, France. That location provided them easy transport access to the supplies they would need.

They made their first enamelled pot that year, a Dutch Oven, and proceeded to create a range of products after that, doing radio and newspaper advertising.

During World War Two, the factory was closed by the Nazis who occupied France.

After the war, the factory re-opened and created new colours of enamel. 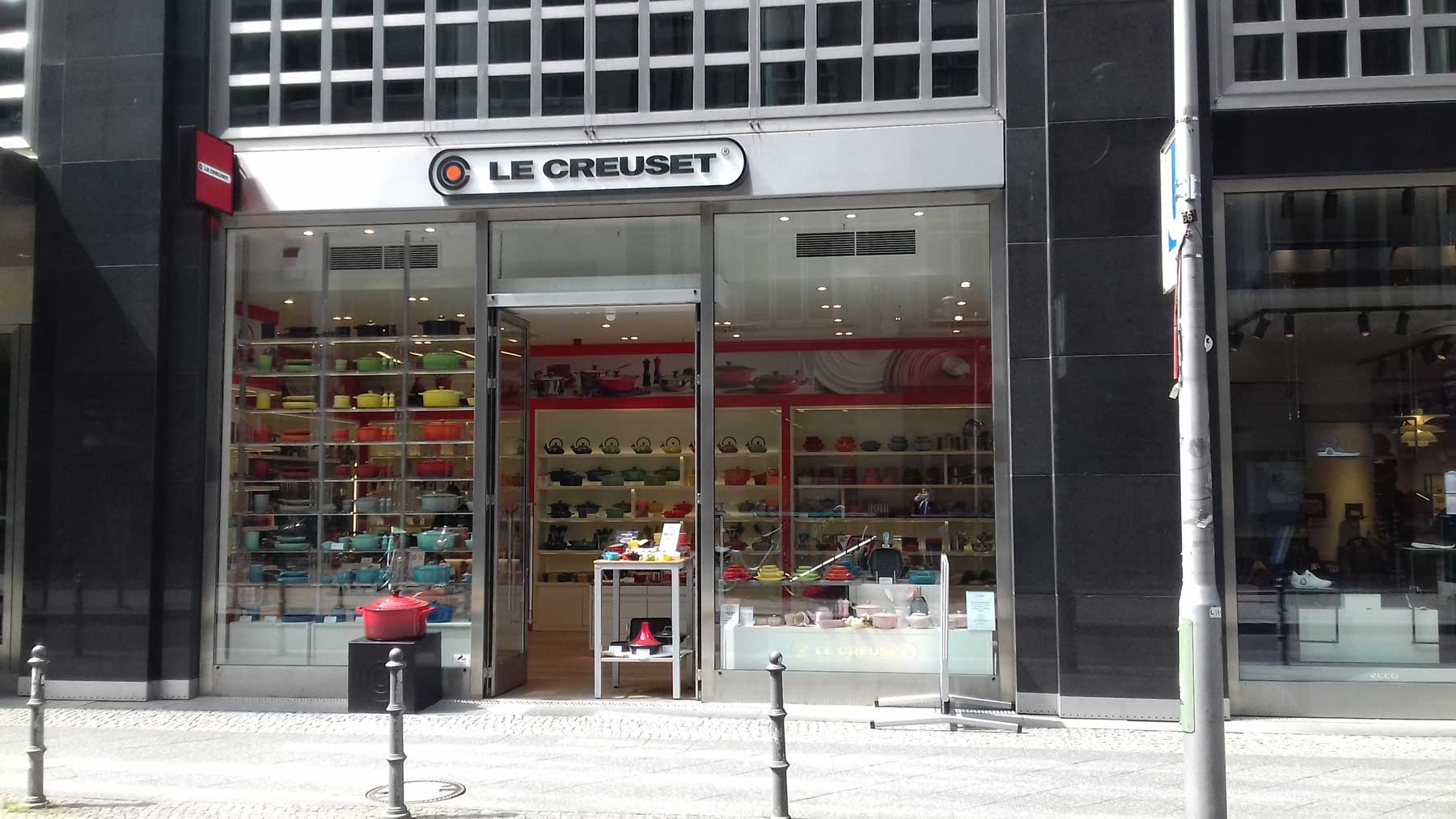 “Creuset” means cauldron, referring to the factory cauldrons that the iron is melted in.