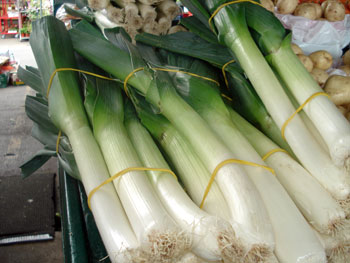 Leeks look like green onions, except that they are far thicker and somewhat taller with a more pronounced onion flavour.

The leaves are far more solid and robust than green onion leaves. In fact, while green onion tops can be eaten raw, mature Leek tops need to be cut up and cooked both to soften them and to mellow the slightly bitter taste they can have when raw. Very young Leeks can be used raw.

If allowed to flower, Leeks will produce small pink flowers that grow clustered in globes.

The bottom bits of Leeks don’t naturally grow white. Earth is heaped up around them to keep the sunlight off. This makes the bottoms of the stems taste sweeter.

Leeks are usually sold in bunches of 2 to 4. The smaller the leek the better; anything wider than 1 ½ inches (4 cm) may be quite tough.

Perhaps the best known uses of Leeks in current cooking are in Quiches, in Cock-a-leekie soup and in Vichyssoise

Leeks can be used in a dish to provide flavour, or cooked as a separate vegetable side dish. Young Leeks will be tender enough to be sliced and used as is fresh in a salad.

To prepare a Leek, cut the roots off at the bottom. Then cut off the leafy top down to where it starts to turn from dark green to lighter green. The darker green bit that you cut off is too tough to eat, but feel free to use it for soup stock.

After chopping, Leeks need washing really well as dirt just loves to get in between the layers. Chop the Leeks and wash in a large bowl or sink of cold water. The Leeks will float to the top; the sand and grit will sink to the bottom. If you need to soak them for 10 or 15 minutes to loosen dirt, you can.

To braise or steam Leeks, chop or split them lengthwise. To boil them, chop them up horizontally, and boil uncovered over medium heat in unsalted water for 10 minutes or until tender.

Leeks give off a mucilage, like okra does, if they are overcooked. You can use this to your advantage to have them help thicken stews or soups, but otherwise don’t overcook them or they will just feel slimy.

Both raw and cooked Leeks respond well to a lemony dressing.

Leeks are native to the Mediterranean. They were grown in Ancient Egypt.

Romans spread them across Europe, including into Britain. The Roman upper class thought that Leeks were superior to onions and garlic, which they felt were for the poor. Nero felt that eating Leeks improved his singing voice and so ate plates of them daily. Eventually one of the nicknames people came up with for him as “Leek eater” (“porrophagus”.) Roman foodies felt that the best Leeks came from Egypt.

The story associating Leeks with Wales has it that Welsh soldiers were getting ready to fight the Saxons in 640 AD. So that the Welsh wouldn’t whack each other in the heat of battle, they stuck Leeks on their hats. The story, though apparently comes to us from the Saxons whose word for leek — leac — also applied to onions and garlic. So far all we know, the Welsh could actually have had big onions on their heads. Another version has them donning the Leeks at the battle of Agincourt.

“Your majesty says very true: if your majesties is remembered of it, the Welshmen did good service in a garden where Leeks did grow, wearing Leeks in their Monmouth caps; which, your majesty know, to this hour is an honourable badge of the service; and I do believe your majesty takes no scorn to wear the leek upon Saint Tavy’s day”. — Fluellen in King Henry V. Act IV, Scene 7. Shakespeare (26 April 1564 – 23 April 1616).

This web site generates income from affiliated links and ads at no cost to you to fund continued research · Information on this site is Copyright © 2022· Feel free to cite correctly, but copying whole pages for your website is content theft and will be DCMA'd.
Tagged With: Ancient Egypt, Roman Food, Viscous Vegetables