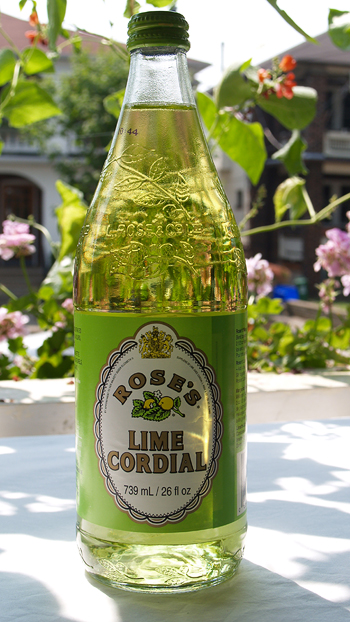 Lime Cordial is a non-alcoholic syrup made from lime juice concentrate, and sugar.

It is still called Lime Cordial in the UK.

Another well-known brand is Belvoir.

Mix up 3 or 4 parts of water or carbonated water to 1 part lime cordial.

Rose’s Lime Cordial was created by Lauchlin Rose in Edinburgh, Scotland in 1867. He took out a British patent on his method of preserving lime juice.

In the same year, ships in both the Royal and British Merchant Navies were required to provide lime juice daily to sailors (to prevent scurvy.)

“Lime juice by L. Rose and Company, Ltd., of London, is made again after a wartime suspension. Remember the bottles with the entwined lime branches, the gold, yellow, and green label? Remember the refreshing flavor that the pale green juice imparted to summer drinks? And use it in recipes for jellied salads, in frozen desserts, in luscious cream pies, wherever lime juice is needed. But take it easy when you splash in the juice. This flavoring is the filtered juice of crushed tree-ripened fruit and is extra full-bodied.

The making of the product starts on the Island of Dominica in the British West Indies where the Rose firm has its lime groves which blossom and bear the year round. At the mill the fruit is crushed between granite rollers, and juice, pulp, and essential oil turned into wax-lined oak casks for shipment to England. At the London plant this is stored in 12,000-gallon oak tanks and allowed to rest until the pulp and essential oils rise to the top. Then the pure lime juice is drained off, filtered, bottled, and ready for distribution in the world’s fine food shops.” — Paddleford, Clementine (1898 – 1967). Food Flashes Column. Gourmet Magazine. August 1948.

This web site generates income from affiliated links and ads at no cost to you to fund continued research · Information on this site is Copyright © 2022· Feel free to cite correctly, but copying whole pages for your website is content theft and will be DCMA'd.
Tagged With: Cordials, Fruit Syrups