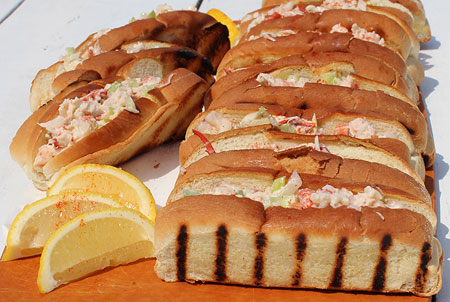 A lobster roll is a bread roll filled with bite-sized chunks of lobster meat.

Lobster rolls are made on the Atlantic coast of North America, from the New England area of the United States on up into the Maritimes areas of Canada.

In 2009, prices for a Lobster Roll on both sides of the border averaged about 15 dollars US, give or take a few dollars.

McDonald’s in New England and in the Maritimes offers, seasonally, their version of a lobster roll called a “McLobster Roll.” Those who have sampled it have said that it’s the same quality of lobster [1]Knight, Wendy. On a Roll, for Lobster. New York Times. 4 August 2006 and type of bread roll as you will get elsewhere and that while the McDonald’s version is smaller, it’s also cheaper.

The version of lobster roll known as “New England style” became popular in Maine in the 1970s and spread to other states. This version mixes the lobster chunks in a binder sauce such as mayonnaise. This filling mixture may be referred to as “lobster salad”, in the way one refers to “egg salad.” It can be put in the roll either room temperature or chilled.

Beyond the lobster chunks and mayonnaise, the debate is always what else and how much of “what else” to add to the mixture. Other ingredients may typically include minced celery, lemon juice and lettuce. Some say that “what else” should equal “nothing else.”

The roll used is a top-slit, soft-sided hot dog roll that has been griddled. You brush the soft sides of the roll with melted butter, and put in a hot pan, griddling each side for about three minutes, then toast the top and bottom for a minute each.

New England Lobster Rolls are frequently served with French fries or potato chips (aka crisps in the UK.)

The roll is filled with chunks of lobster that were warmed in drawn butter. There is no mayonnaise or any other ingredient.

Connecticut lore has this sandwich originating at Perry’s Restaurant in West Haven, Connecticut, in the 1930s.

This may or may not be so. But prior to the 1970s, Lobster Rolls elsewhere in New England, even in Maine, had warmed lobster chunks in them. And, you can still get these Connecticut Style Lobster Rolls in Maine at places such as the Clam Shack near the Kennebunk River bridge [2]The lobster used is North American Atlantic Lobster, aka Homarus americanus, aka Boston Lobster, aka Canadian Lobster. and Portland Lobster Co in Portland. [3]Murphy, Jen. What Makes a Perfect Lobster Roll? Foodandwine.com blogs: posted 23 May 2007. Retrieved November 2009.

You want about 1 cup of lobster meat per roll.

One “chicken” sized lobster (around 1 pound / 450g) has enough meat for two rolls — three generously-filled rolls if you pick over the body of it.