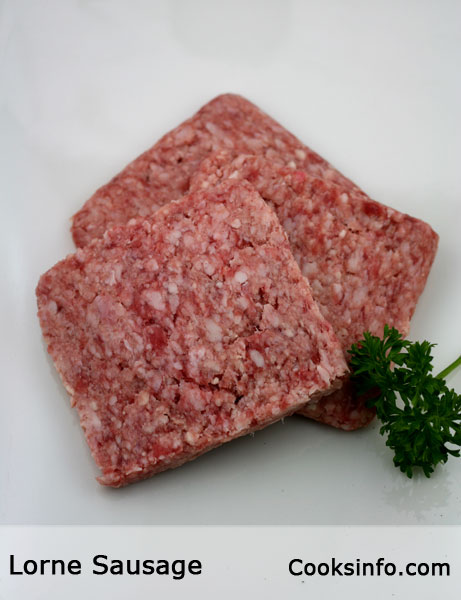 It can be made of mutton, pork, pork and beef, or beef, along with cereals and spices.

In Scotland, it is sold sliced, about 10 slices per frozen pack, or fresh from butchers and butcher’s counters.

In 2009, the Scotland’s Craft Butchers association began organizing a bid to protect the name of Lorne sausage with European Protected Geographical Indicator (PGI.) Under the terms of the bid, the sausage would have to be made within Scotland.

To use, just cut off slices, like squarish patties. It’s raw, so must be cooked. It can be fried, deep-fried, grilled/broiled, baked or barbequed.

It doesn’t contain water, so it won’t sputter in pans.

Don’t overcook, or it will go dry and hard. The cooked slices fit nicely in sandwiches.

Nutritional facts will vary wildly based on the maker of the sausage. Expect the fat, carb and sodium content to be high unless otherwise indicated.

This web site generates income from affiliated links and ads at no cost to you to fund continued research · Information on this site is Copyright © 2023· Feel free to cite correctly, but copying whole pages for your website is content theft and will be DCMA'd.
Tagged With: Scottish Food