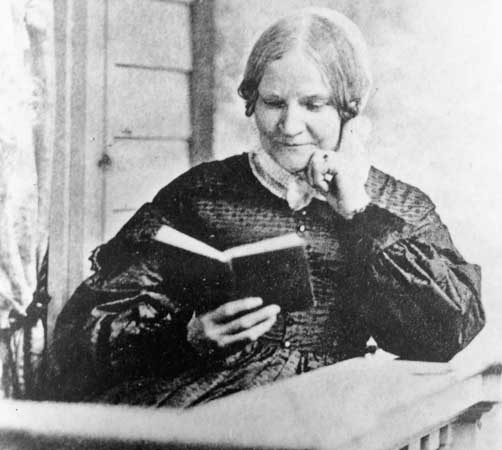 Lydia Maria Francis Child was a popular cookbook writer as well as the author of now-famous and much-loved Thanksgiving poem.

She was the author of “The Frugal Housewife”, a book aimed at poorer housewives who didn’t have servants (e.g. the vast majority of women in the world.) It was an attempt at a scientific approach to housekeeping and cooking, focussed on how to save money and time. By 1930, the full title had become: “The American Frugal Housewife, Dedicated to Those Who Are Not Ashamed of Economy.” She is perhaps best remembered for a poem she published in 1844, “A Boy’s Thanksgiving Day.”

She was strongly opposed to slavery. Among her friends were Charles Sumner, Edgar Allan Poe, John Greenleaf Whittier, and William Ellery Channing.

Lydia was born in Medford, Massachusetts (the same town that Fannie Farmer would be born in 1857.) Her parents were David Convers Francis, a baker, and Susannah Rand Francis. She was the youngest of six children. The family lived in a white stuccoed house on the corner of Salem and Ashland Streets. She was educated at a local girls school. She hated her first name, and always went by “Maria” outside of print.

Child continued to be active over the next 30 years, in various causes and in writing. She died on 20 October 1880, aged 78, at home at Old Sudbury Road in Wayland, Massachusetts, and was bured in North Cemetery in Wayland.

“Over the river, and through the wood,
to Grandfather’s house we go;
the horse knows the way to carry the sleigh
through the white and drifted snow.” — Lydia Maria Child. In “Flowers for Children”. C.S. Francis & Co., New York. Vol. 2, 1844.